In 1997, the game Carmageddon was released to great controversy. I'm old enough that I still remember the release of the game. In Norway, where I live, it was released without any great hassle. Sure, it was rated 18+, but there were no further restrictions or censorship. However, it was censored in some countries, and even outright banned in certain countries.

Let's sum up the basic premise of the game. You control your car through a series of maps. On each map you can win by completing one of three objectives. You can either complete the actual race, or you can destroy every other car in the race, or you can run over and kill every single pedestrian on the entire map. On each map, you have a certain time limit, if time runs out you lose. You gain more time by causing damage to your opponents cars, or by running over pedestrians. 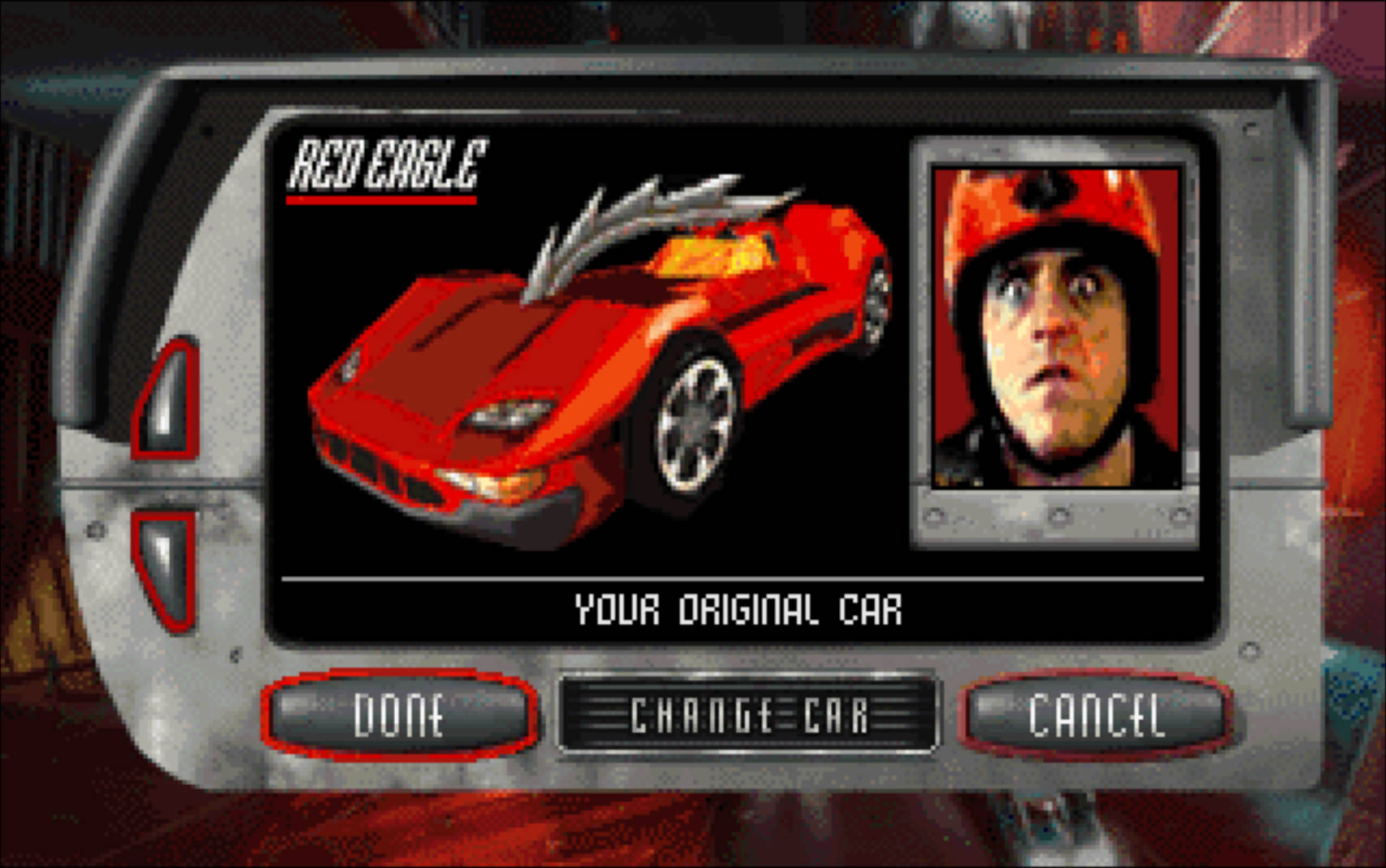 You unlock more maps as you go, and you also have the option of upgrading your car between races. You can upgrade your armor, engine power, or offensive damage. These all cost credits. Completing a map will gain you a large amount of credits. You also gain credits by driving through the checkpoints of the race, by damaging other cars, or killing pedestrians. That last way to gain credits is the one thing that caused all the controversy. Obviously, most gamers don't see the controversy, it's innocent fun. I enjoyed this game immensely when it was originally released, and I do occasionally pick up the game again for some fun. 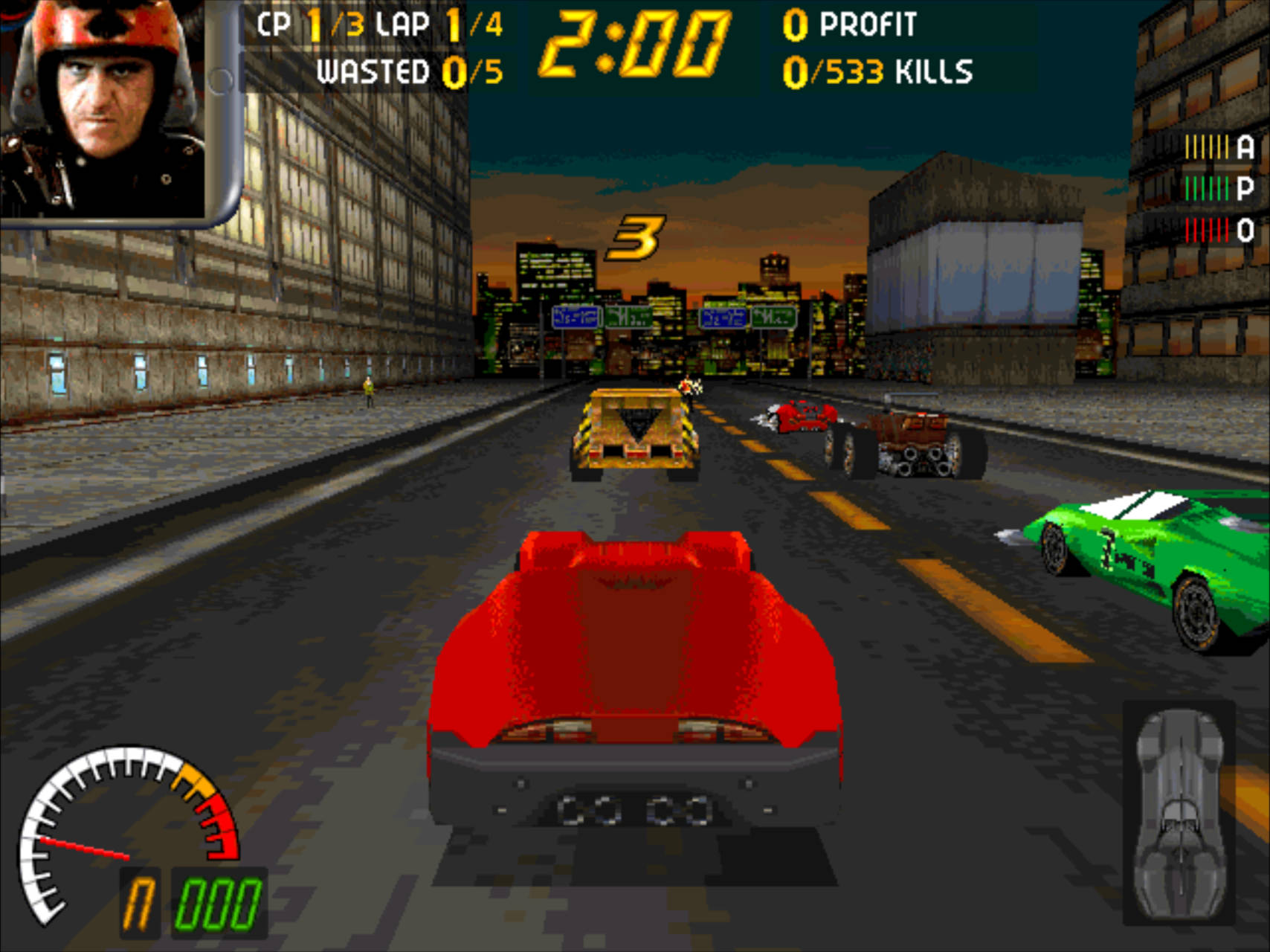 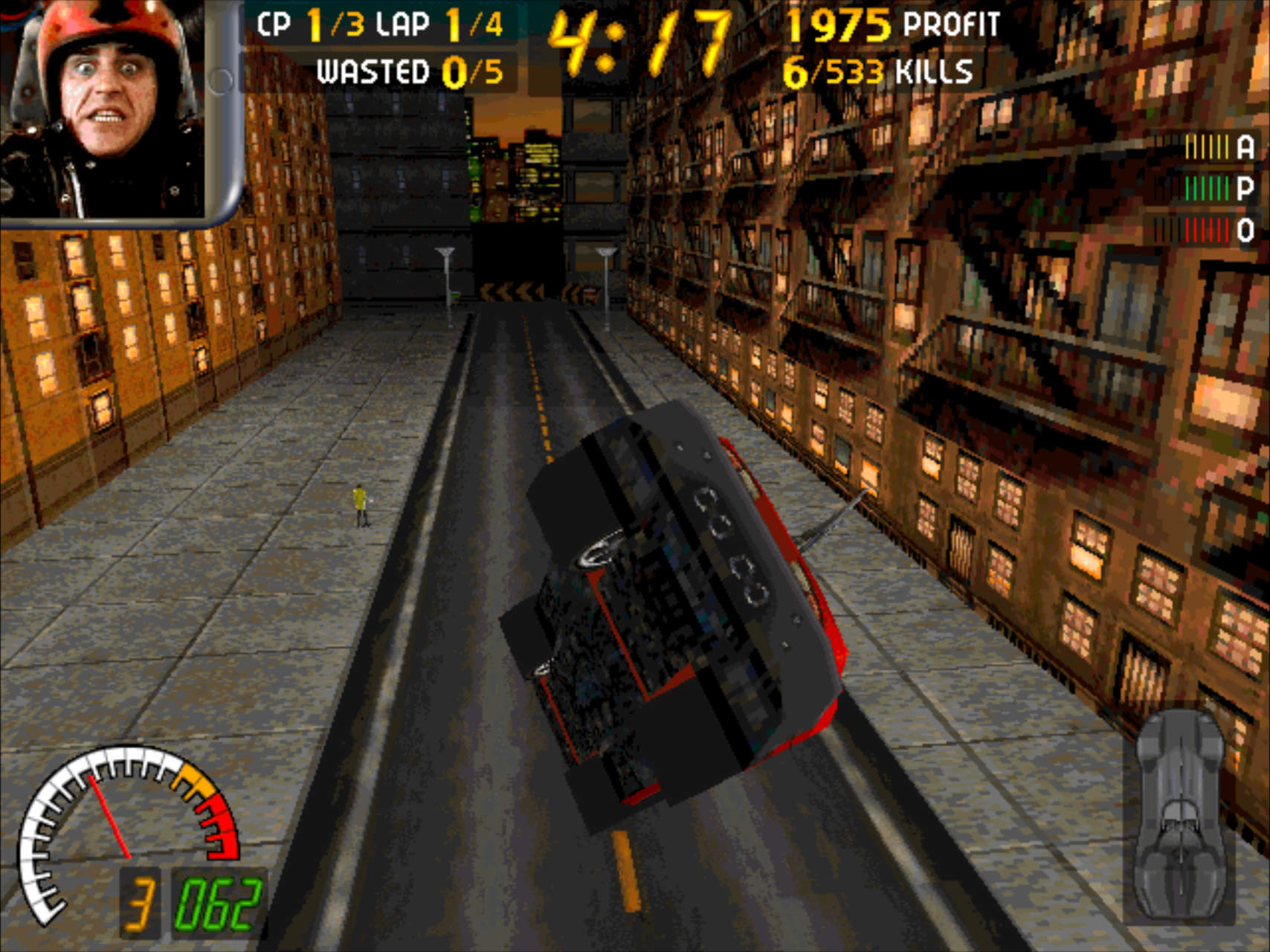 You get to pick between two characters at the start of the game. Max Damage, or Die Anna. They both have their own car, which is almost identical, except for some small differences in speed, sturdiness, and appearance. If you waste an opponent during a race, you have the chance to steal their car. Only some cars can be stolen, and it is never a guarantee that you will get to steal a stealworthy car. For one, the cars have a rank requirement. You begin the game at rank 99, and it will improve as you complete maps. Rank 1 is the best. But even if you meet the rank requirement to steal a car, it is still only a 50% chance that you will get it when you waste it. However, absolutely all cars, including those that can't be stolen, will be unlocked for you when you beat the game. You even get the two starting cars in different colors. In order to "beat" the game you just need to complete the final five levels. 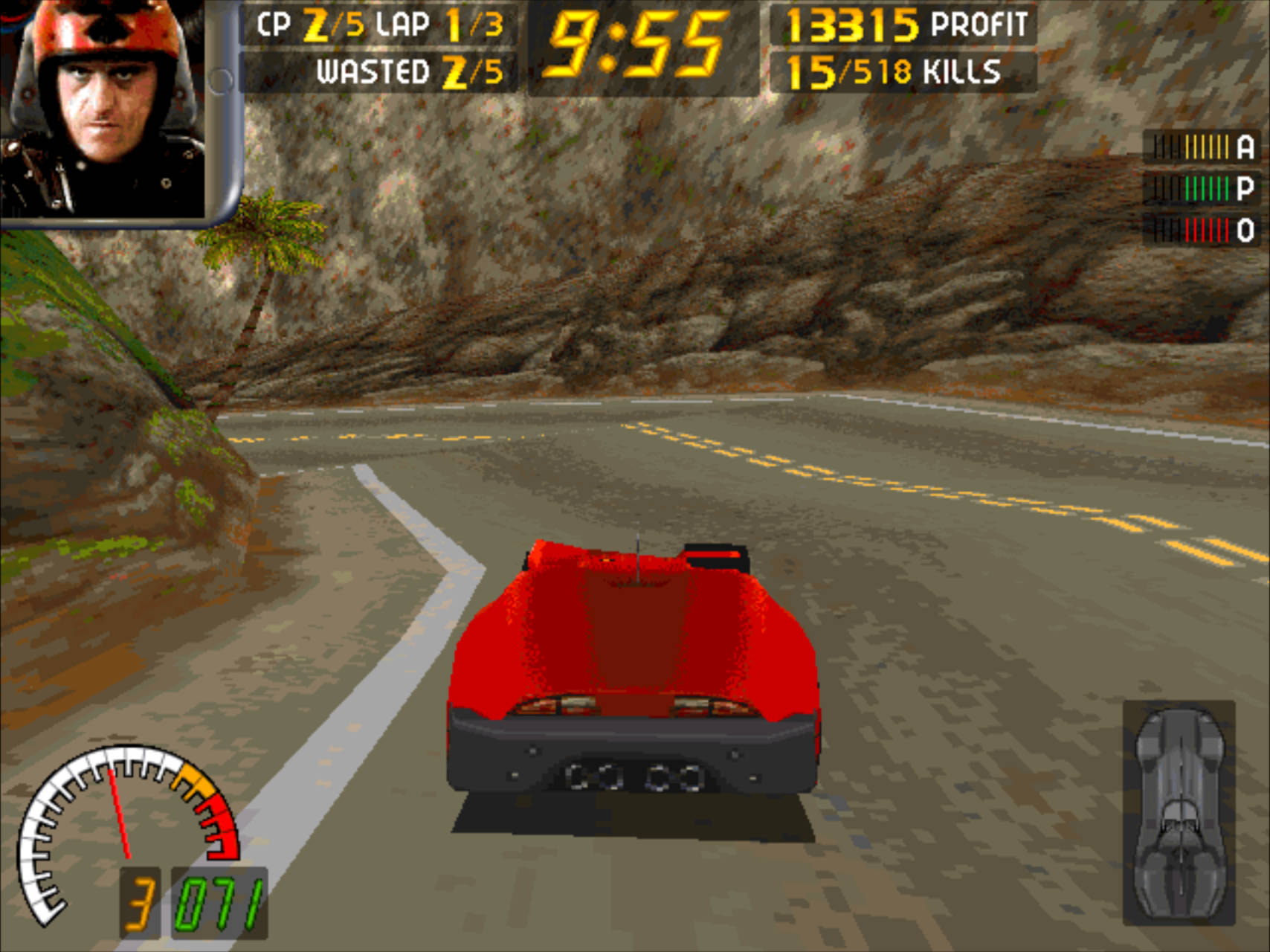 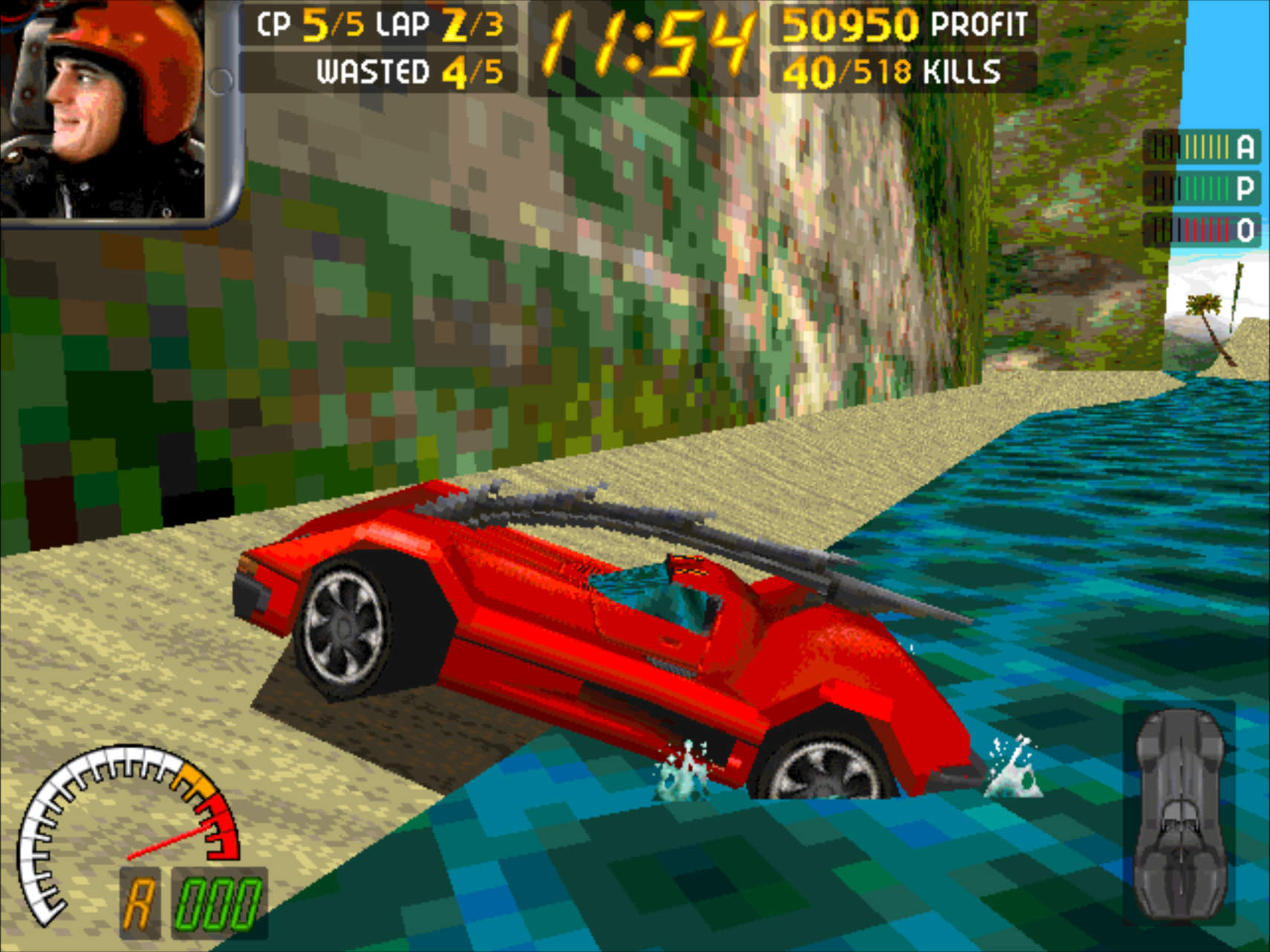 There are five levels of upgrades to your car. You will already have the first level at the start of the game. Purchasing an upgrade will apply to all your unlocked cars. There is quite a noticeable difference between playing unupgraded or fully upgraded. I mostly stick to the starting car since I find many of the other cars to have bad handling. This is particularly true for one of the stronger cars that you can unlock before completing the game, it packs quite a punch, but is terrible to drive. However, when you are fully upgraded, even your starting car is good enough to handle almost all other cars. When you complete the game, a sixth "Cheat" level upgrade becomes available. 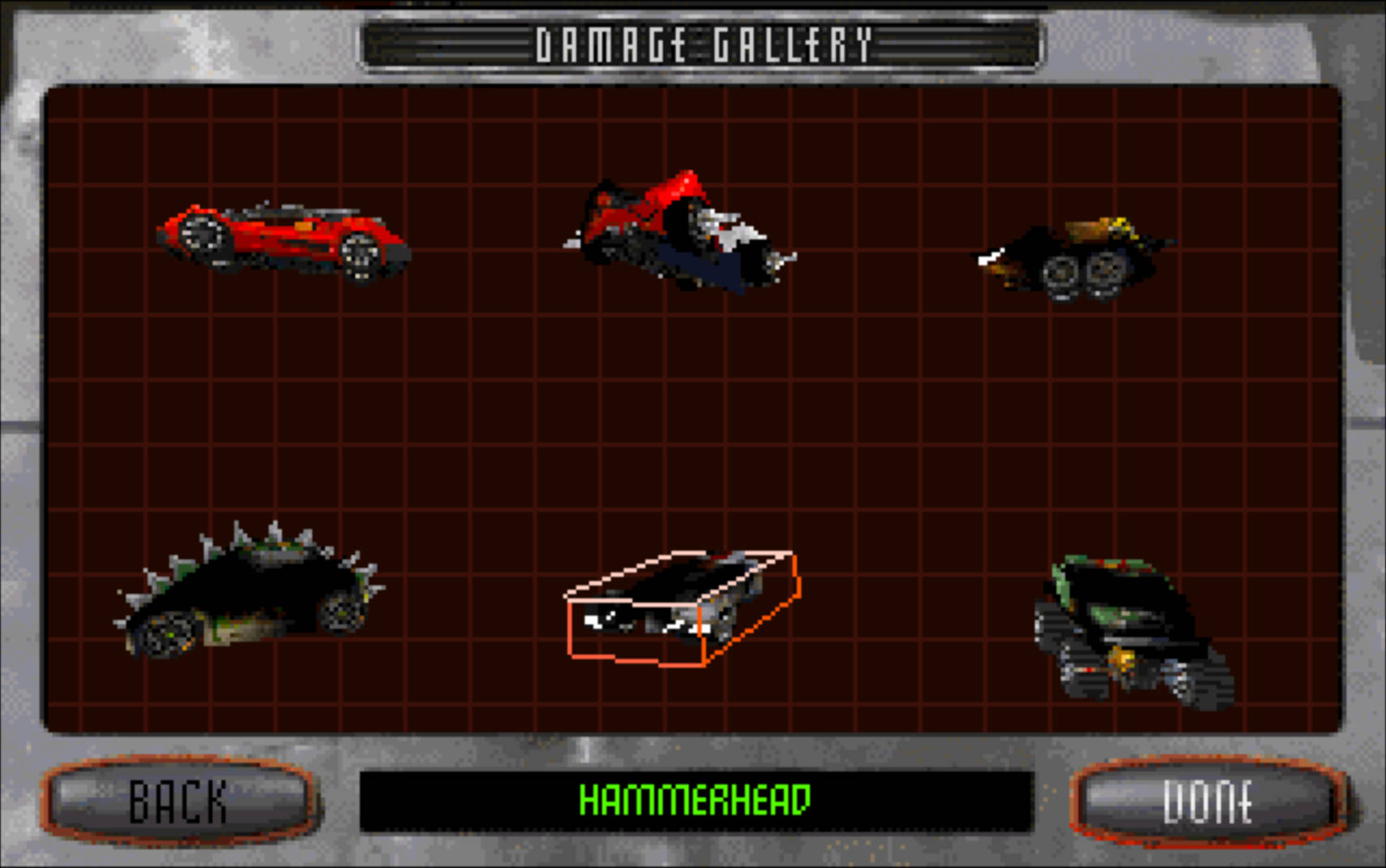 The number of maps, along with all the different cars make the game quite replayable. The maps themselves are often fun to just explore, something I usually do once I've unlocked all cars. One important thing to remember in this game is that you don't need to worry about losing a race. If time runs out, you can simply try again, there is no penalty. If you are curious about a new car, just try it. If it turns out that you don't like it, you can bail out of the race without losing your progress. In that regard, this game is very forgiving. 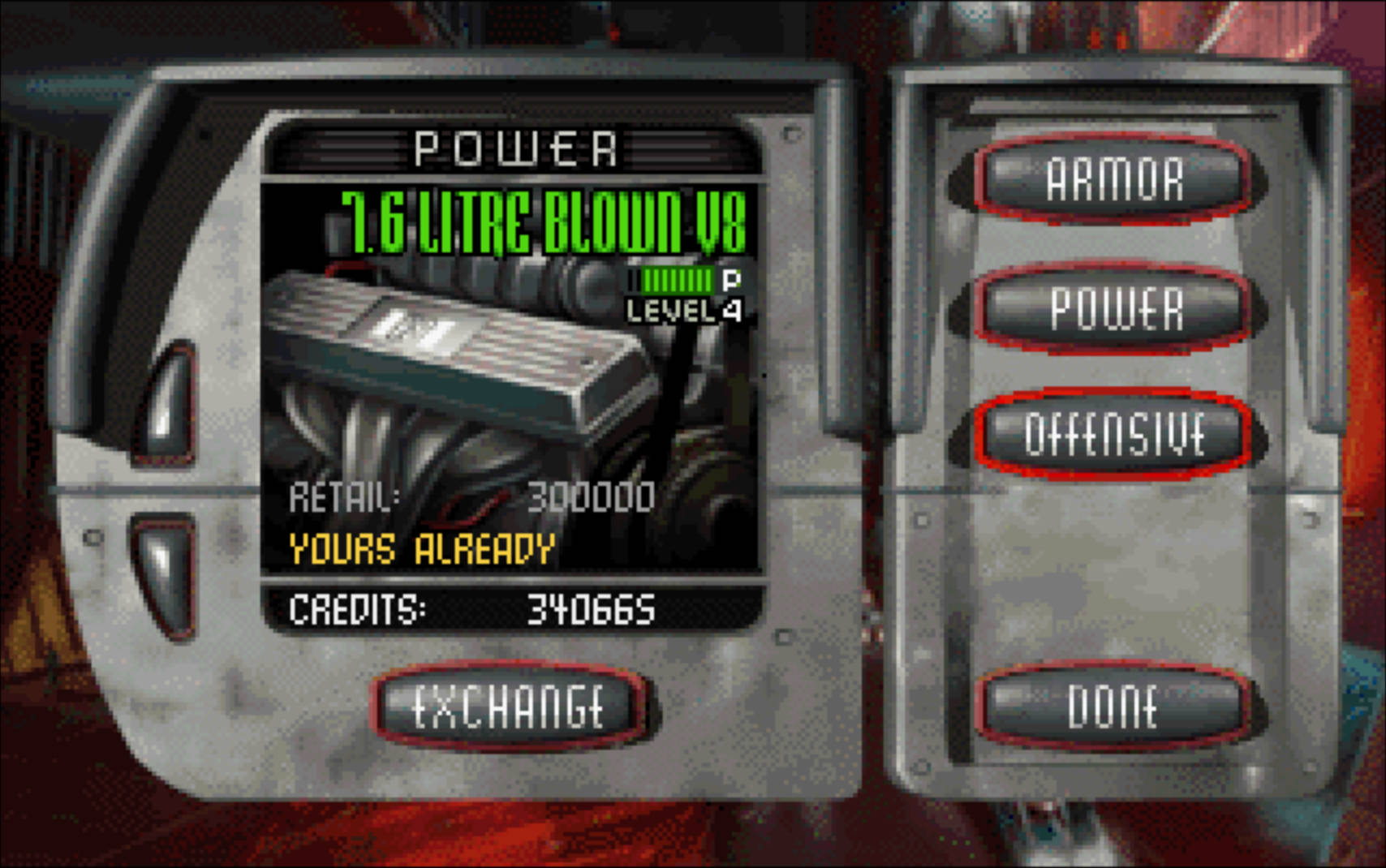 There is an expansion for the game, called the Splat Pack. It adds new cars, as well as providing a new set of levels to play through. The expansion plays separately from the original game, which was common for expansion packs in those days. The new maps are quite different from the base game, which makes the expansion worthwhile to play in my opinion. 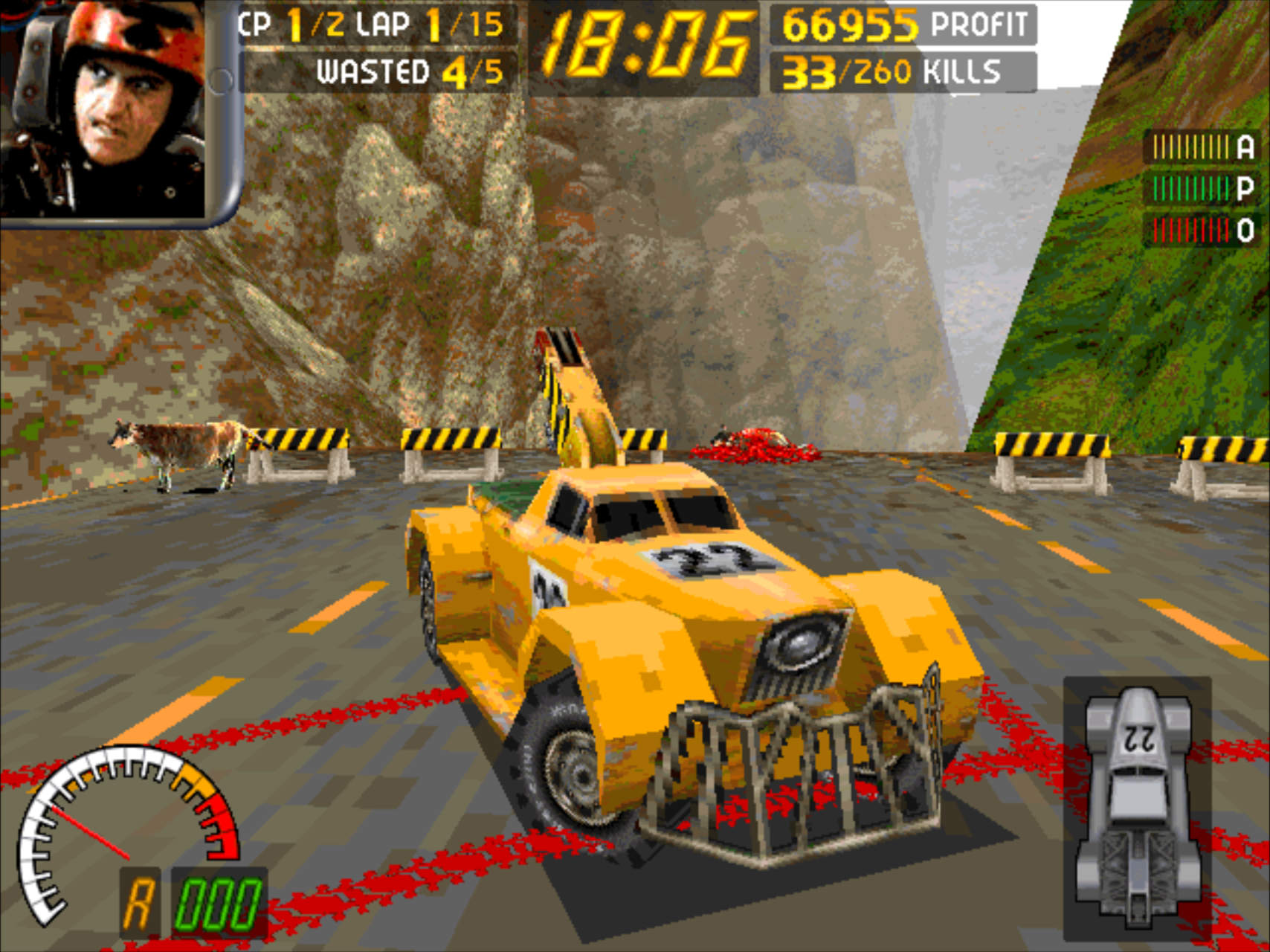 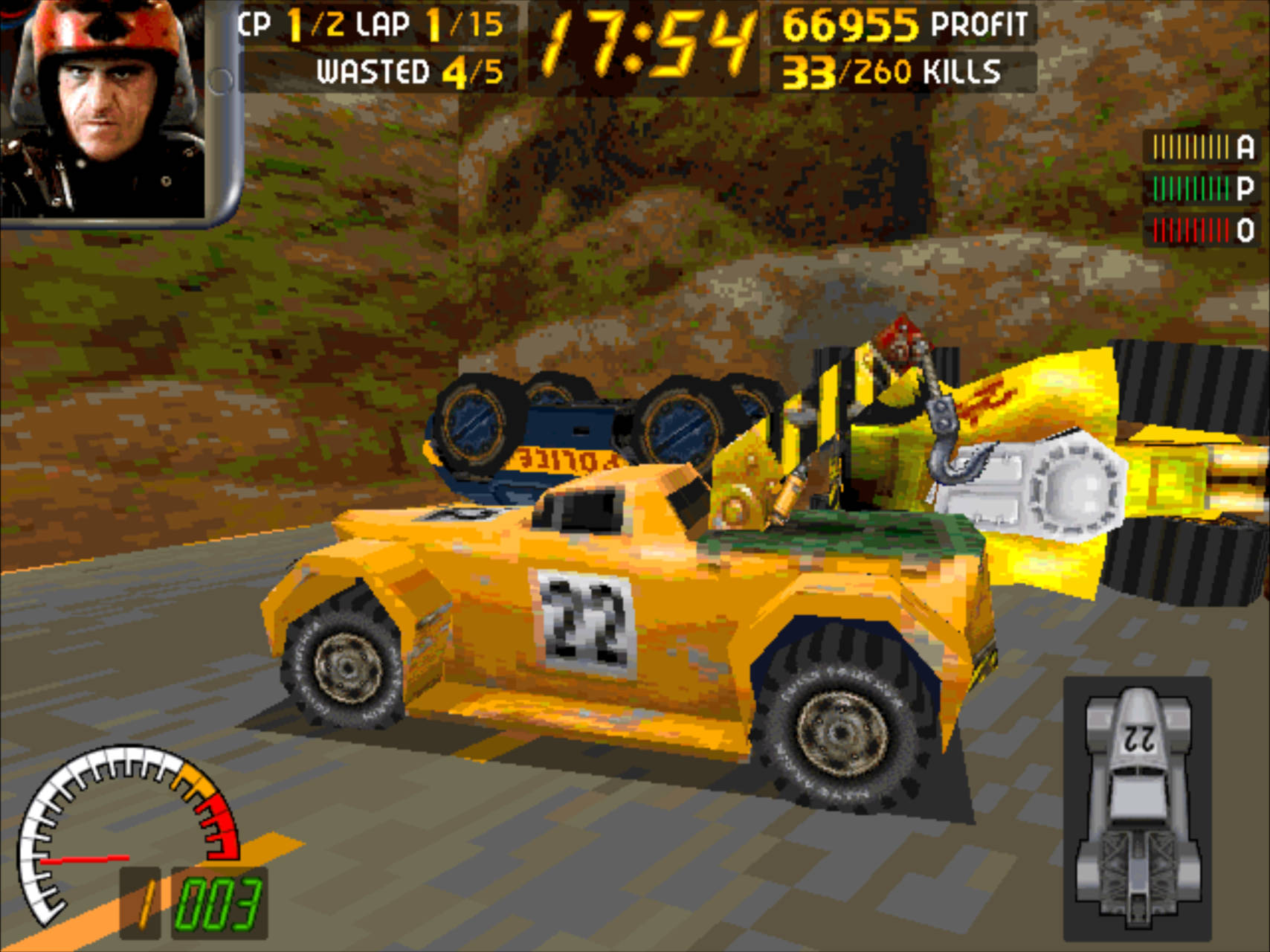 One thing I have not mentioned is the soundtrack. You get to drive like crazy to a pretty nice heavy metal track. This is the kind of game I would recommend if you've had a louzy day and want to unwind. It's also a nice game to play if you just want to have some fun. Seriously, it's almost a therapeutic experience to play this game with loud volume. 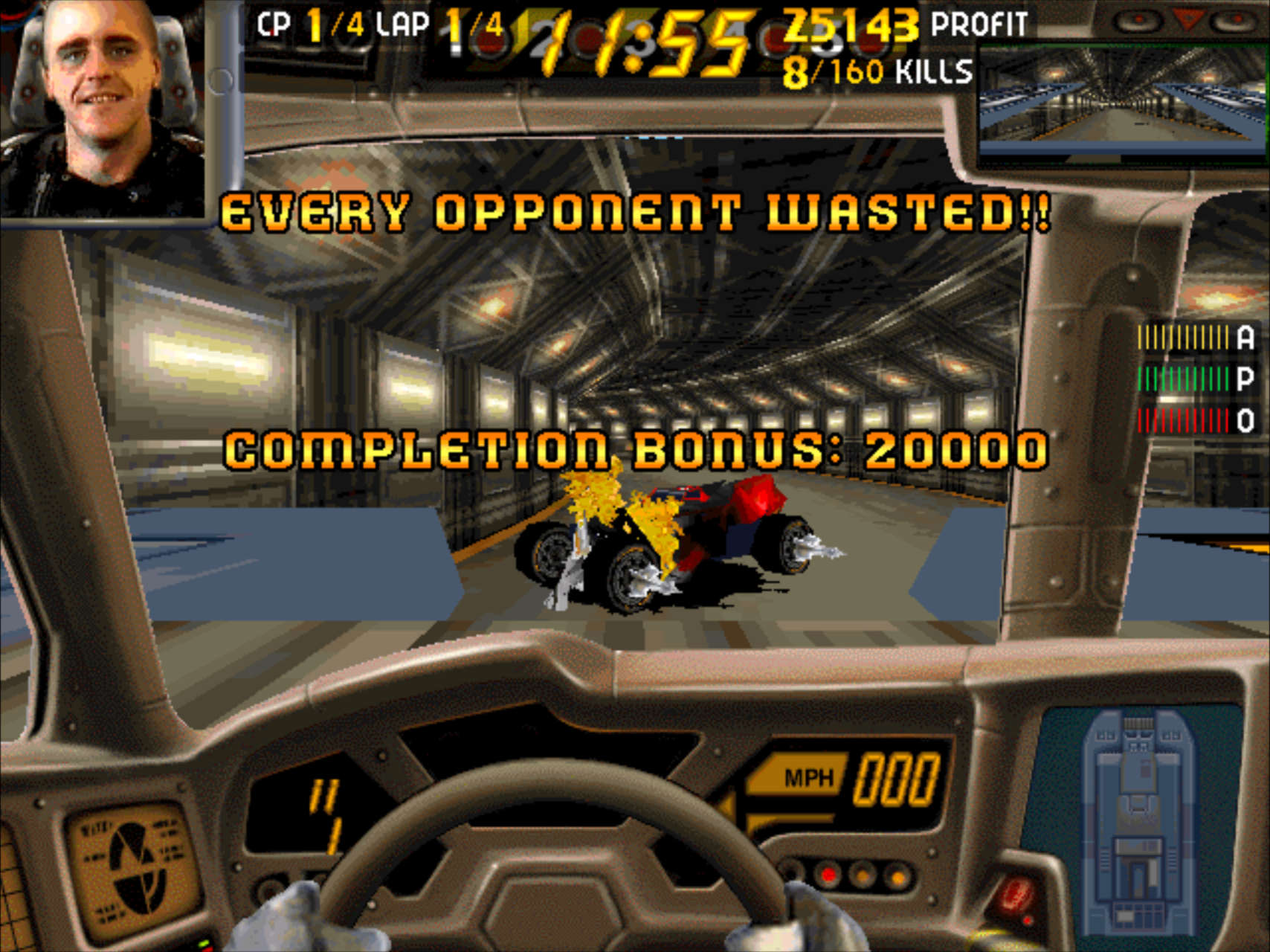 If you are looking to have some fun in an unusual racing game, or rather, combat game with cars, definitely try this one. It is loads of fun, and your continued progress is rewarded with unlocked cars and upgrades.