Among the many games that I played growing up, I still play some of those games to this day. Master of Magic, originally released in 1994, is a timeless classic.

You take the role of a wizard, seeking to become the master of all magic. You start out as the ruler of a small village and must expand for your power to grow. You are not alone as other rival wizards are on the same quest. It is up to you to overcome your rivals, and prove yourself the superior wizard. 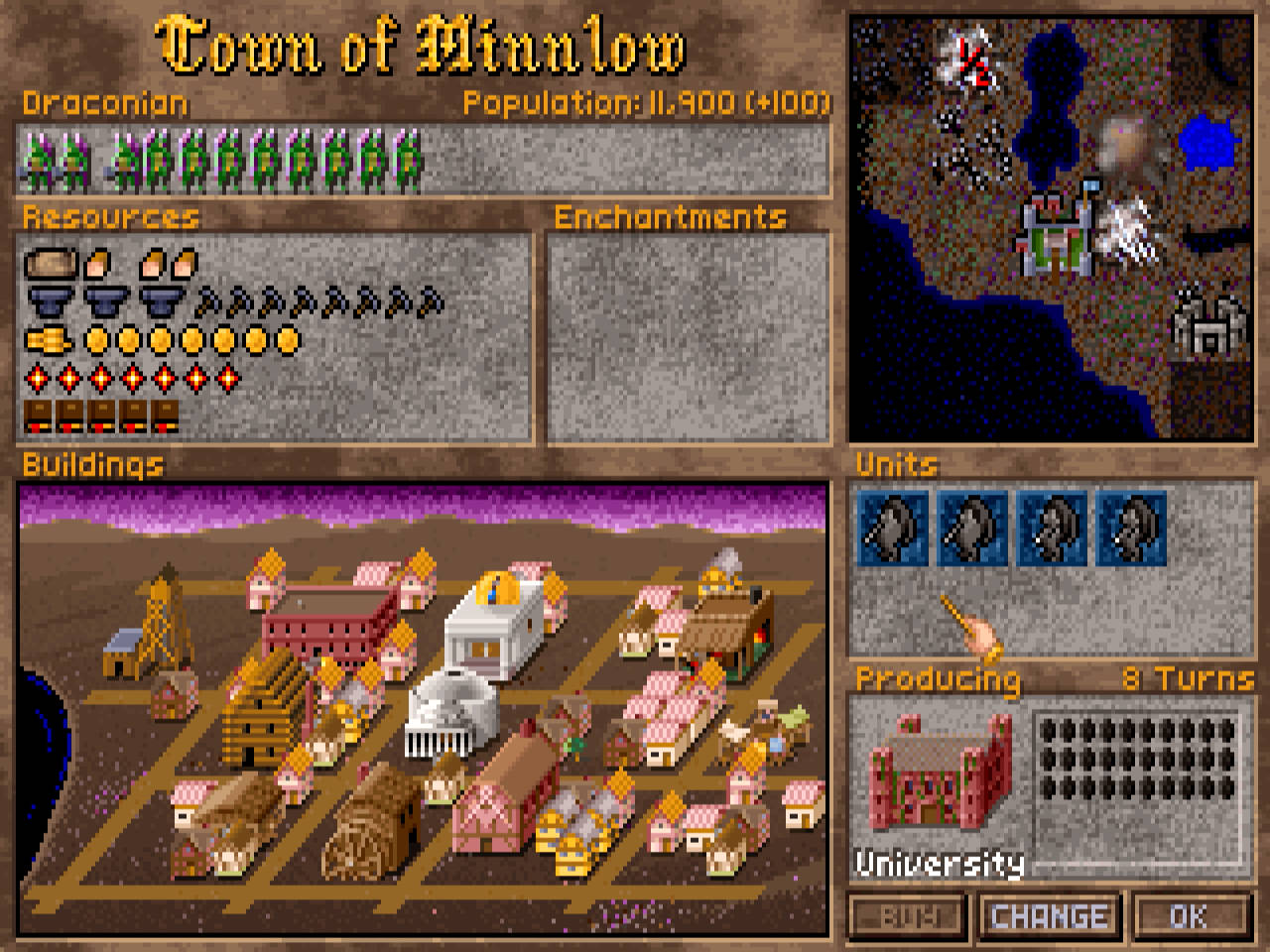 This is a turn-based strategy game, and I will cover the most basic gameplay elements first. Each army unit you have will be able to move a certain amount on the map each turn. You can also select which building you want to be built in a town. Since you are a wizard, you also have the ability to cast spells, so you can select spells to cast. Some spells can be completed in the same turn, while others will require several turns to complete. This depends on your power, which will grow along with your empire. To expand your empire, you can either conquer neutral or enemy towns, or you can create settlers that can build a new town. Conquering the world is one obvious way to win the game. However, you can also win by researching a spell that grants you victory when the spell is cast. 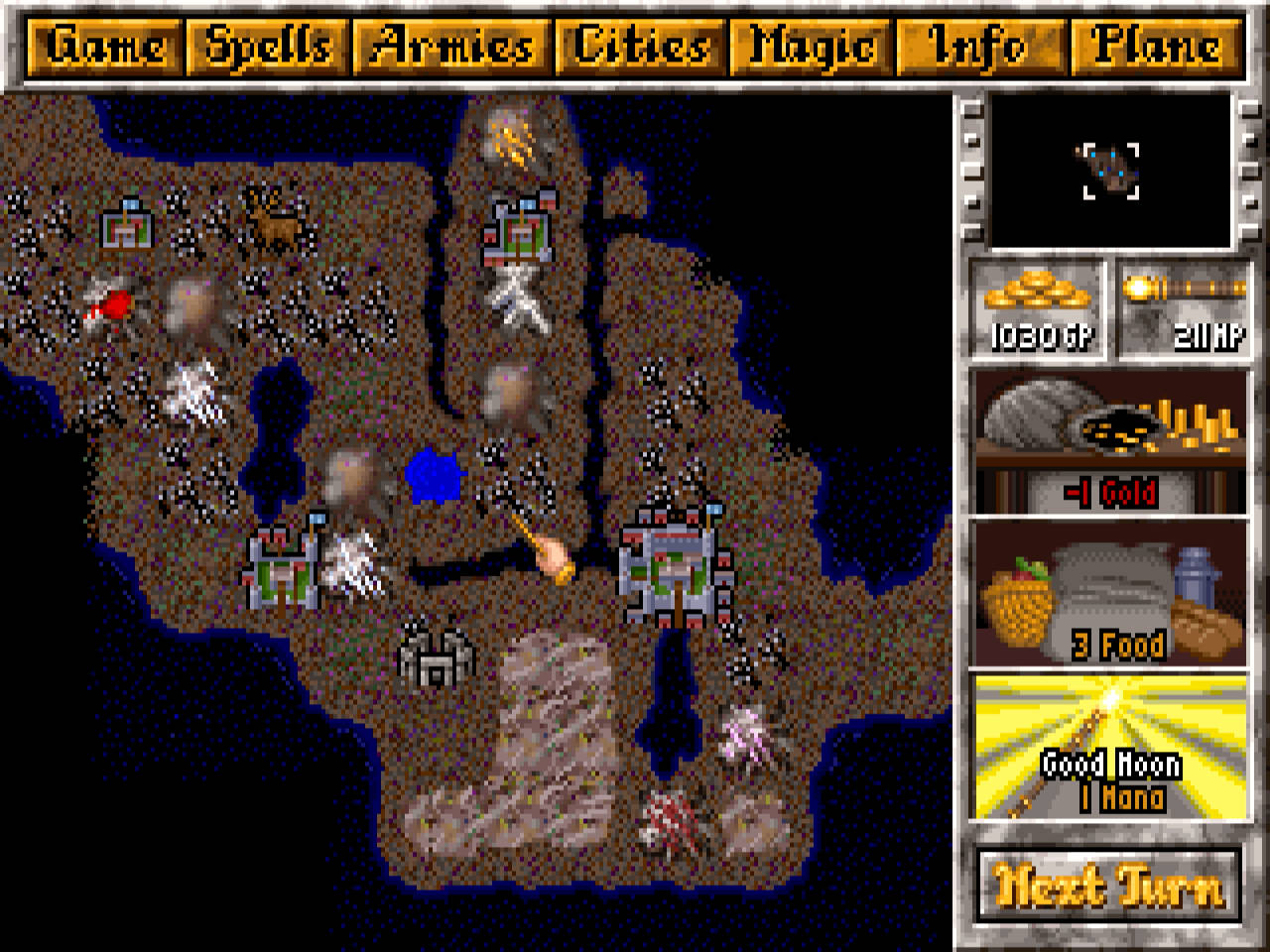 You will need to manage your gold, food and mana income. Certain town buildings, as well as army units, will require a gold upkeep every turn. You earn gold from taxing your townsfolk, and building special buildings that increase revenue. Food is required by just about anything that lives, and people will start dying if you can't feed them. Your regular townsfolk can either contribute to construction or to food production. This is something you can set for each town, and should be adjusted according to needs. Mana is your magical power. You can decide how much of your power you want to devote to mana generation, spell research and spell power. Once again, this is something that should be adjusted according to needs. If you wish to summon magical creatures, these will require mana upkeep, and as such you will need a higher mana generation. 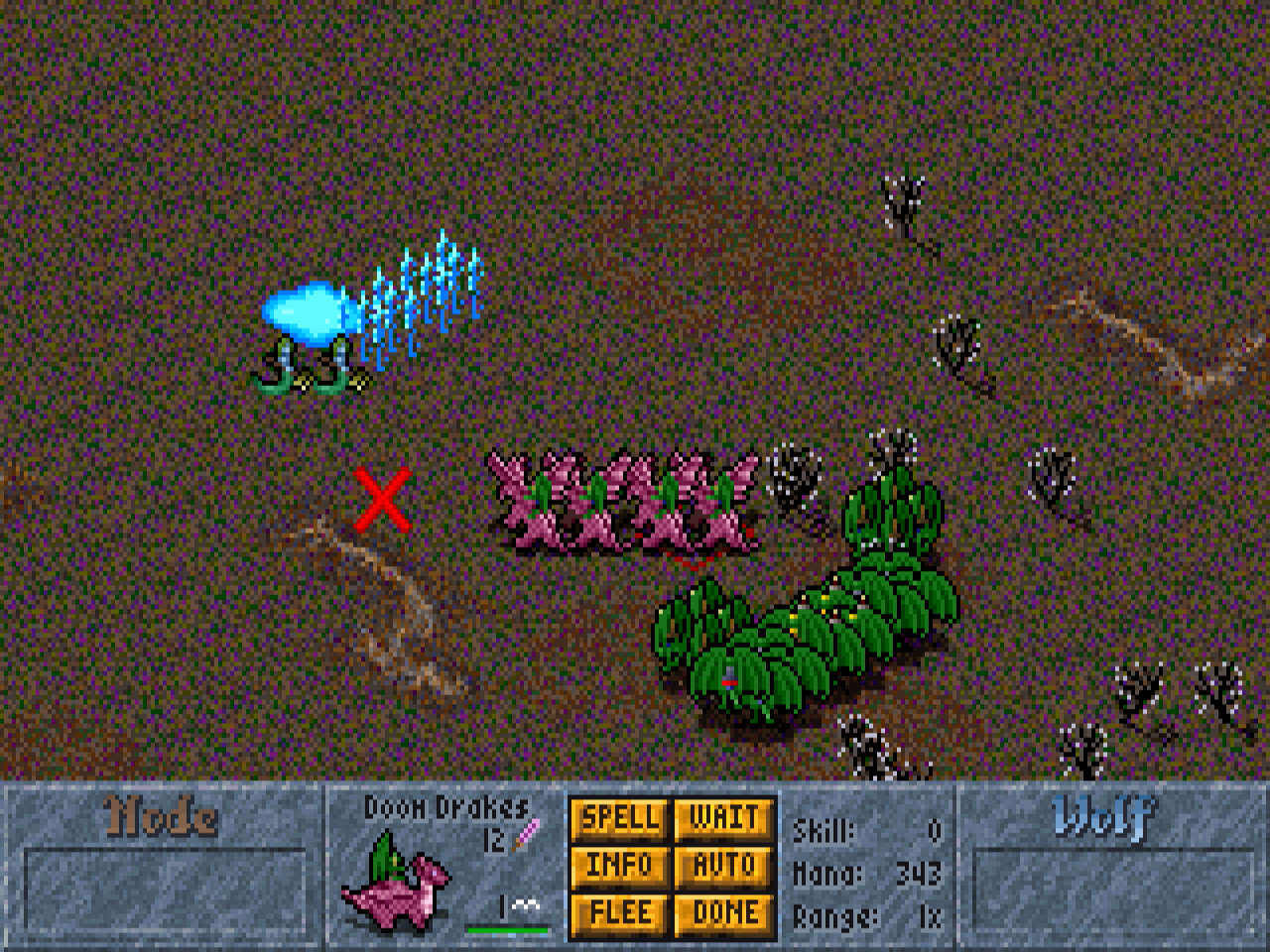 Whenever your armies move into a space occupied by a force or town that belong to someone else, you will engage them in combat. There are also some locations on the map where you also must do combat before you can take the resources at the location. Combat is fought in a separate screen where each army unit get their own turn. You also have the ability to cast spells in combat, which can turn a losing battle into an easy win if you have the right spells. 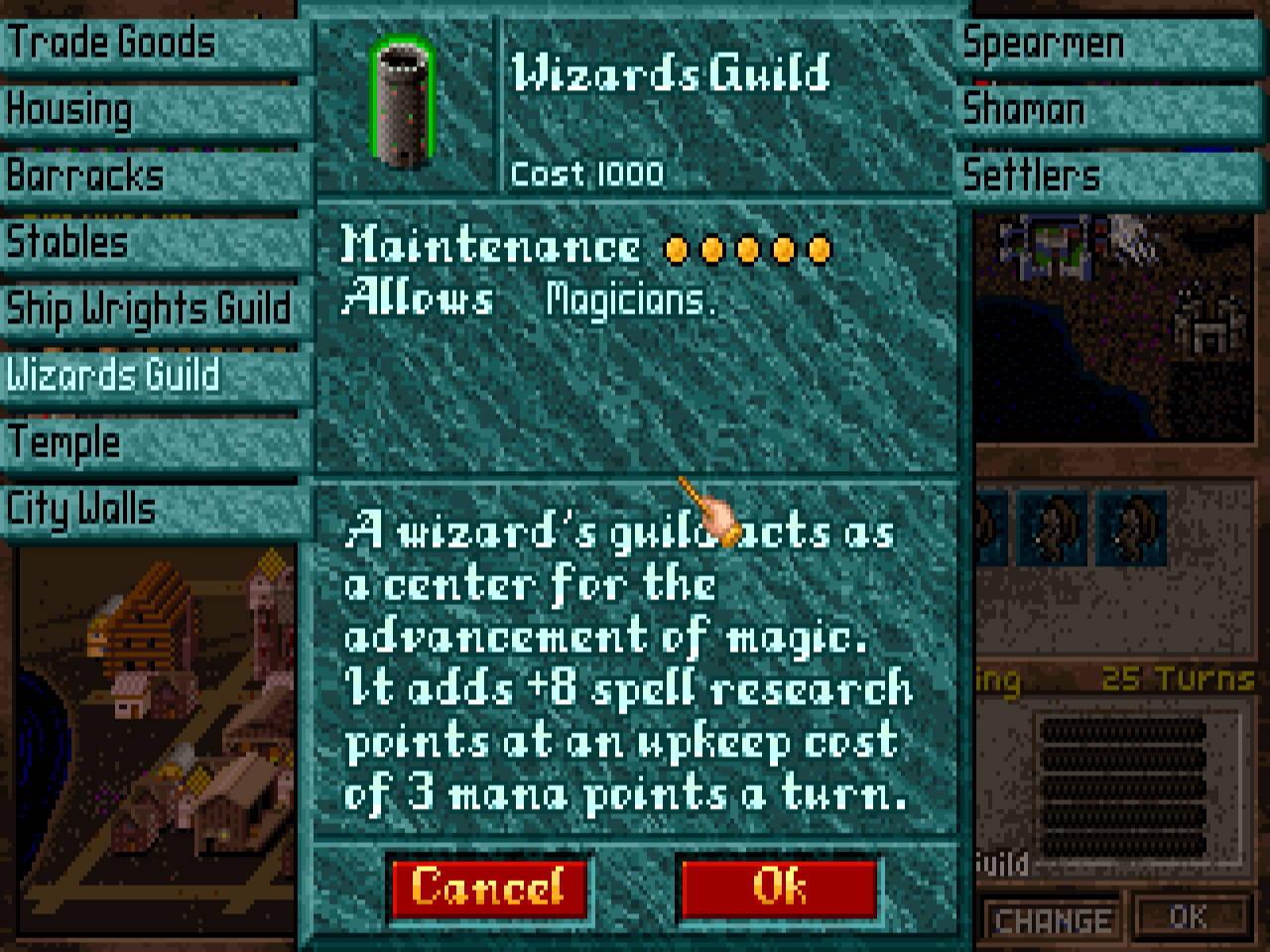 There are multiple ways you can raise armies. Your towns can produce military, and this is the most common way of raising an army. These troops will also have their experience level improve over time, making them more effective if you can keep them alive. Certain town buildings will also make the troops more effective from the start, such as giving them better attack and letting them start with a higher experience level.

Heroes will also offer to join your cause, and while they tend to be somewhat weak at first, they usually end up becoming very powerful as their experience level increases. Heroes will randomly offer to join you and you can also summon them with spells. You can also improve their effectiveness further by equipping them with items. Items can be found while exploring locations on the world map, purchased from traveling merchants, or created from spells. 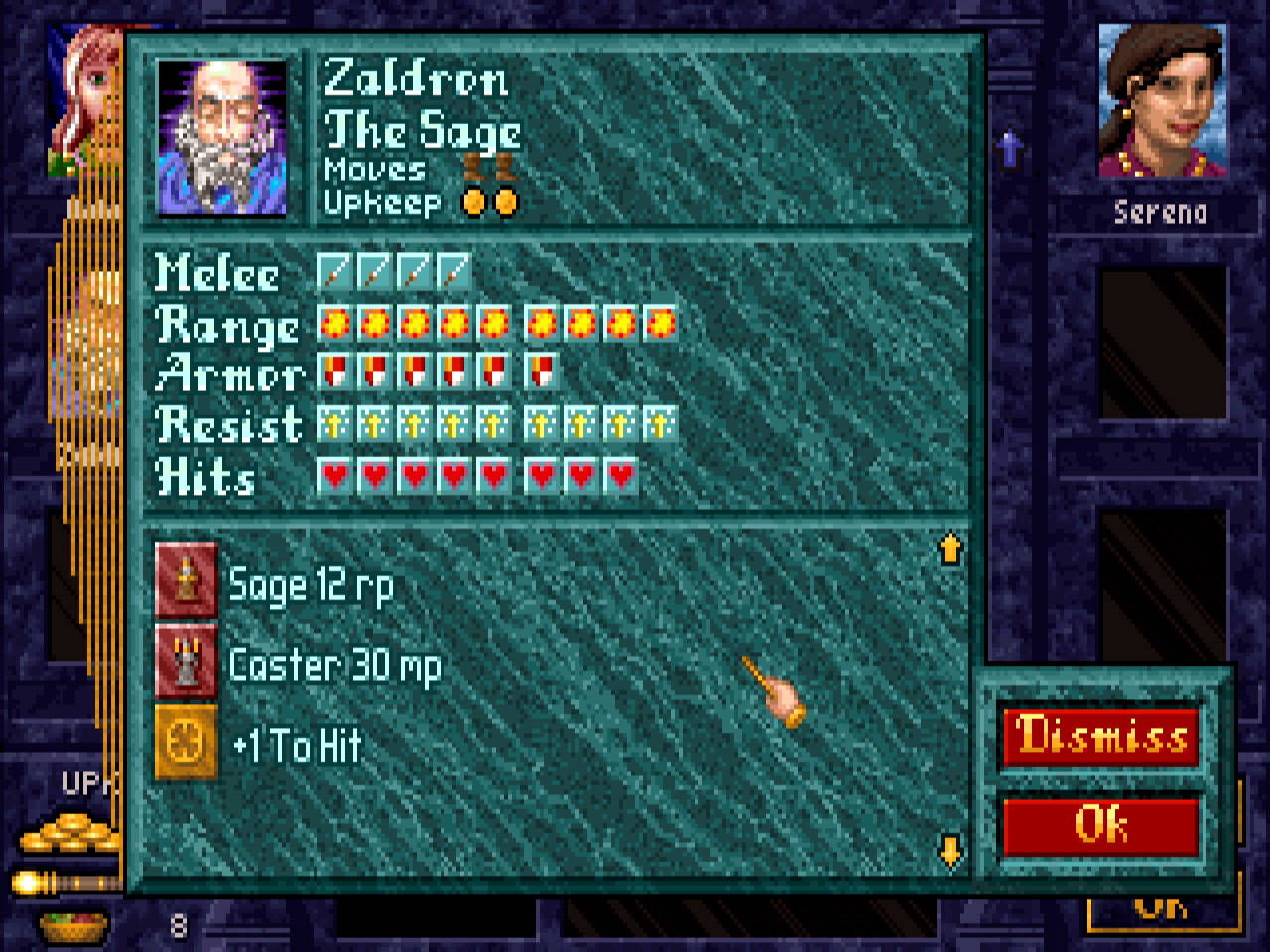 Lastly, you can summon creatures from spells. Some creatures can be summoned in combat, and they will disappear once the combat is over. However, if the summoning spell is cast outside of combat, then the creature will remain under your command until death. Such creatures have a mana upkeep, and if you run out of mana then your summoned creatures will start to disappear.

The most powerful creatures in the game are among those that must be summoned, but their upkeep ensures that only the most powerful wizards will be able to field them. In most cases, your armies will consist of mostly military units from towns, supplemented with heroes and summons. 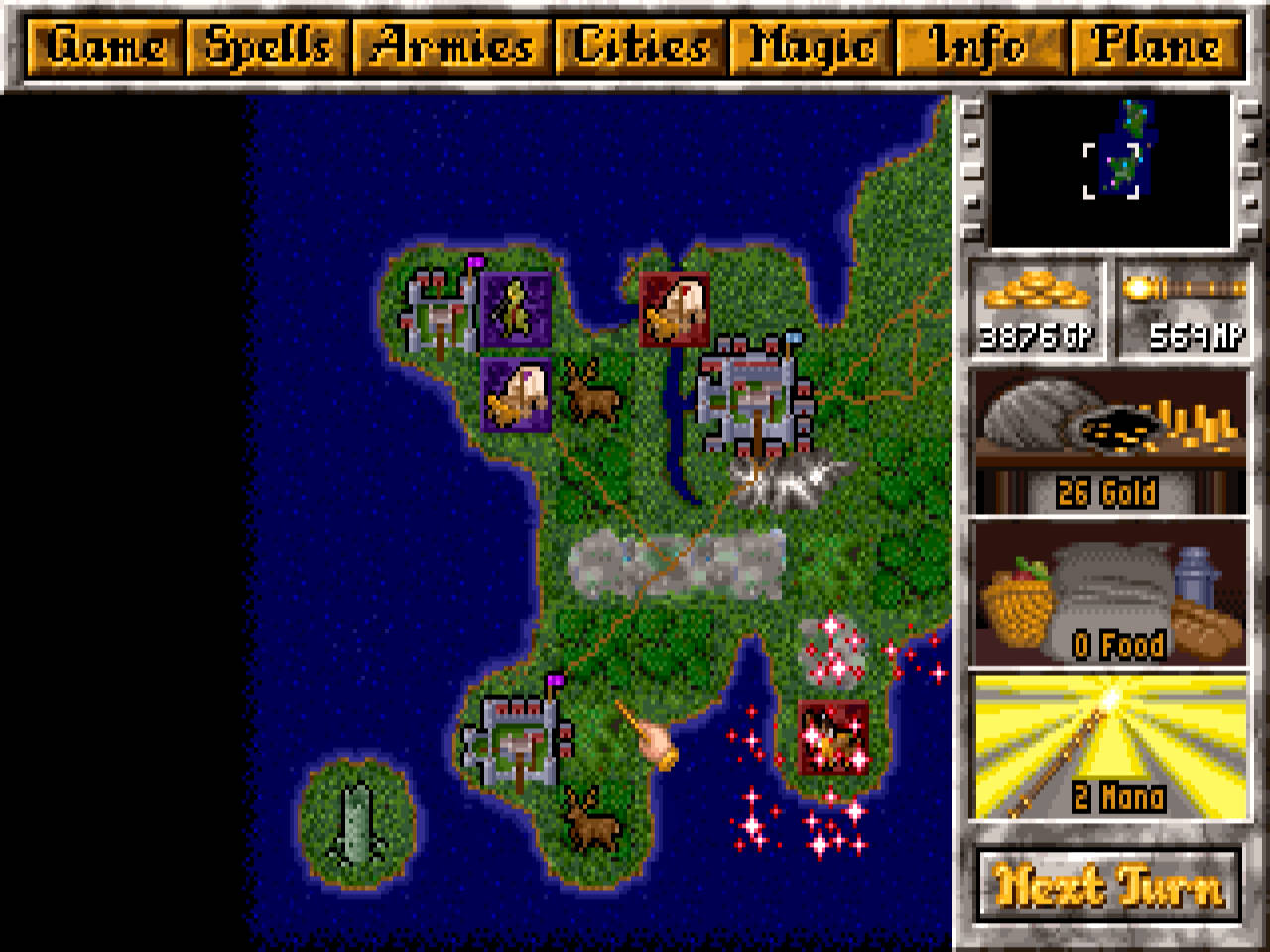 The world itself consists of islands of varying size, dotted across the world. You can also travel around the world by going directly west or east. You will end up at the same point eventually. This method of traveling does not work north or south, where you will come to an impassable border. There are actually two worlds in the game, Arcanus and Myrror. Arcanus is a typical fantasy world with bright colors and moderate danger. Myrror is a darker world, with more powerful races and greater danger. You will find towers that connect both worlds, and from these towers you can move your armies between the worlds. There are also spells that can accomplish the same, providing superior mobility as well as some sweet surprise attacks.

To cross the oceans the separate the islands, you will need units that can move across water. Ships can be used to ferry your armies, and some units can walk on water. Flying units is also very suitable for getting across the ocean. Spells can accomplish both feats, provided you know the right realms of magic. 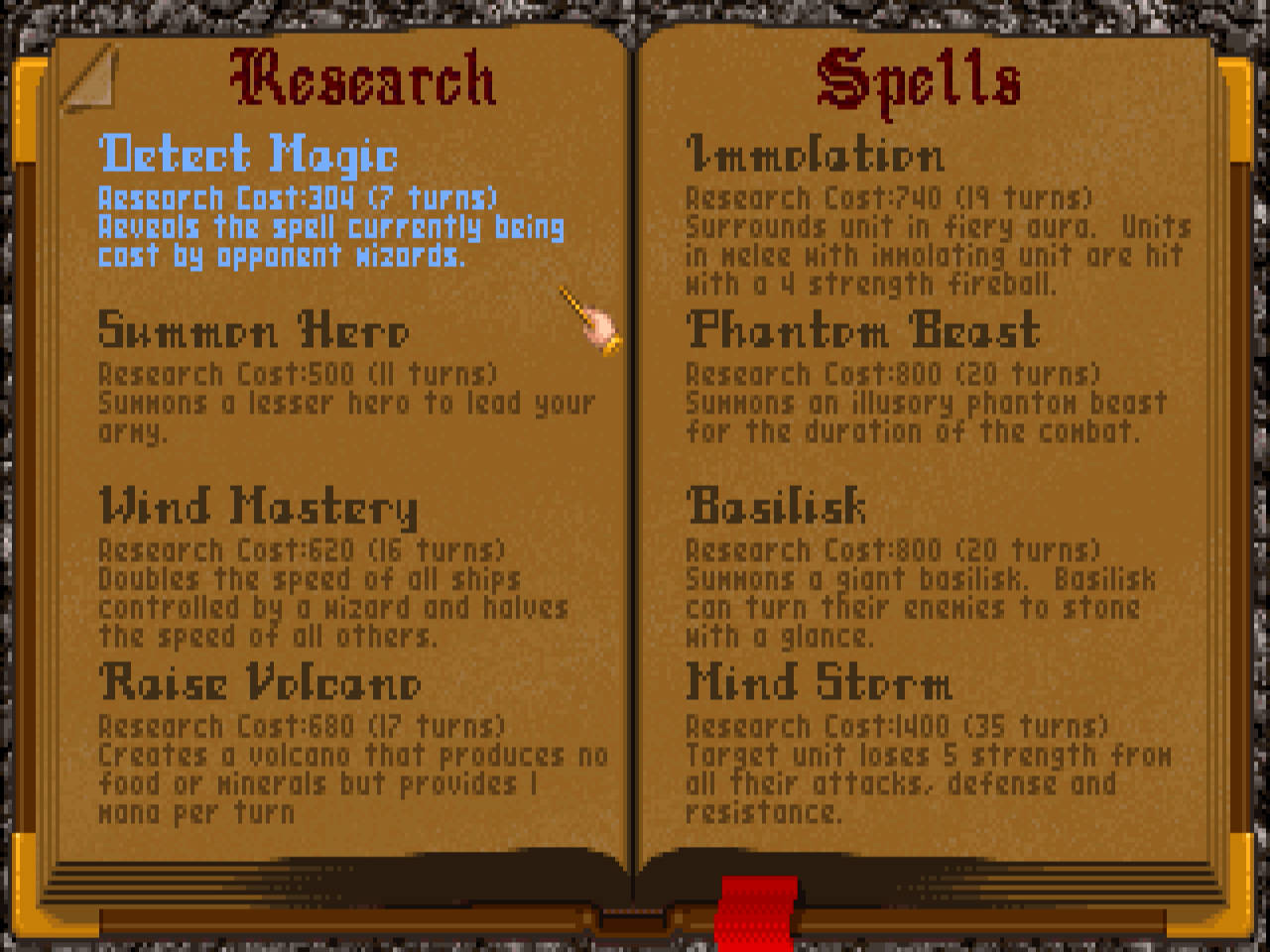 It's high time we talk about spells. Being a wizard, one of your primary goals is magical knowledge. Researching spells is something you will keep doing until there is nothing left to research. There is a huge variation of spells, some instant use spells, other spells will continuously affect a town or possibly the whole world. Any spell that has a lasting effect will require an upkeep in mana, and if you wish to rely on such spells then you must devote much of your power into mana generation. But you can also devote your power directly to research, which will let you grow your arsenal of spells much more quickly.

There are six realms of magic, all with their own unique spells and strategies. Two of the realms are mutually exclusive, Life and Death. The other realms are Nature, Chaos, Sorcery, and lastly Arcane, which is a bit unique. All realms except for Arcane require spell books. The number of spellbooks you have in a realm will determine how many spells you can research from that realm, it also provides other bonuses such as giving you more options when creating items. The Arcane realm is different, it has much fewer spells than the other realms, and you will be able to research all of them. 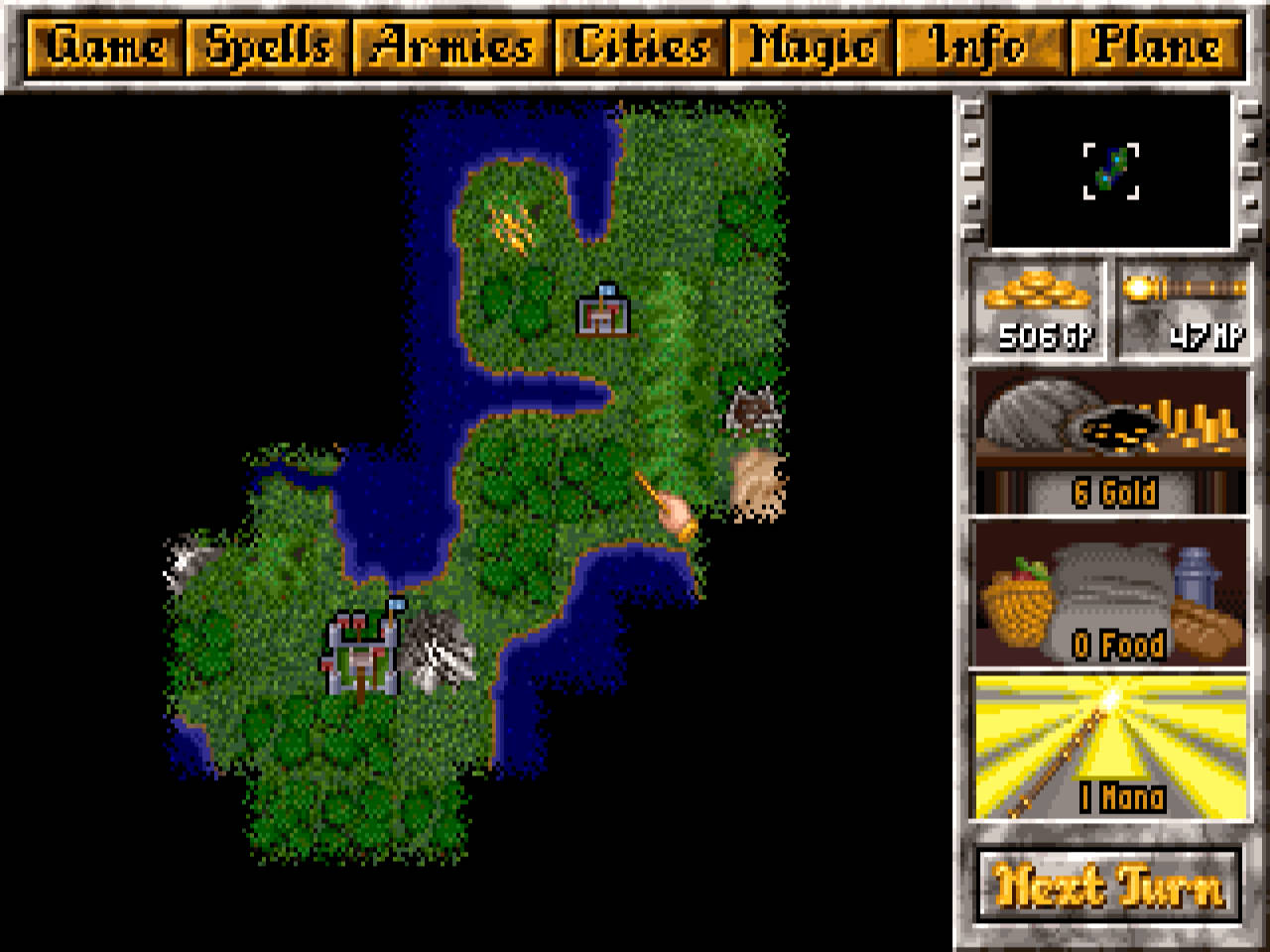 Researching spells leads to one way of winning the game. When you start to run out of possible spells to research, the Spell of Mastery will become available for research. It takes a very long time to research this spell, and it also takes a while to cast it. However, once you complete casting it, you will instantly win the game. Of course, the moment you start casting this spell, every other wizard will become hostile and immediately start a war to destroy you. If you opt for this way to victory, you should make sure you can weather the attacks until you have completed casting the spell. 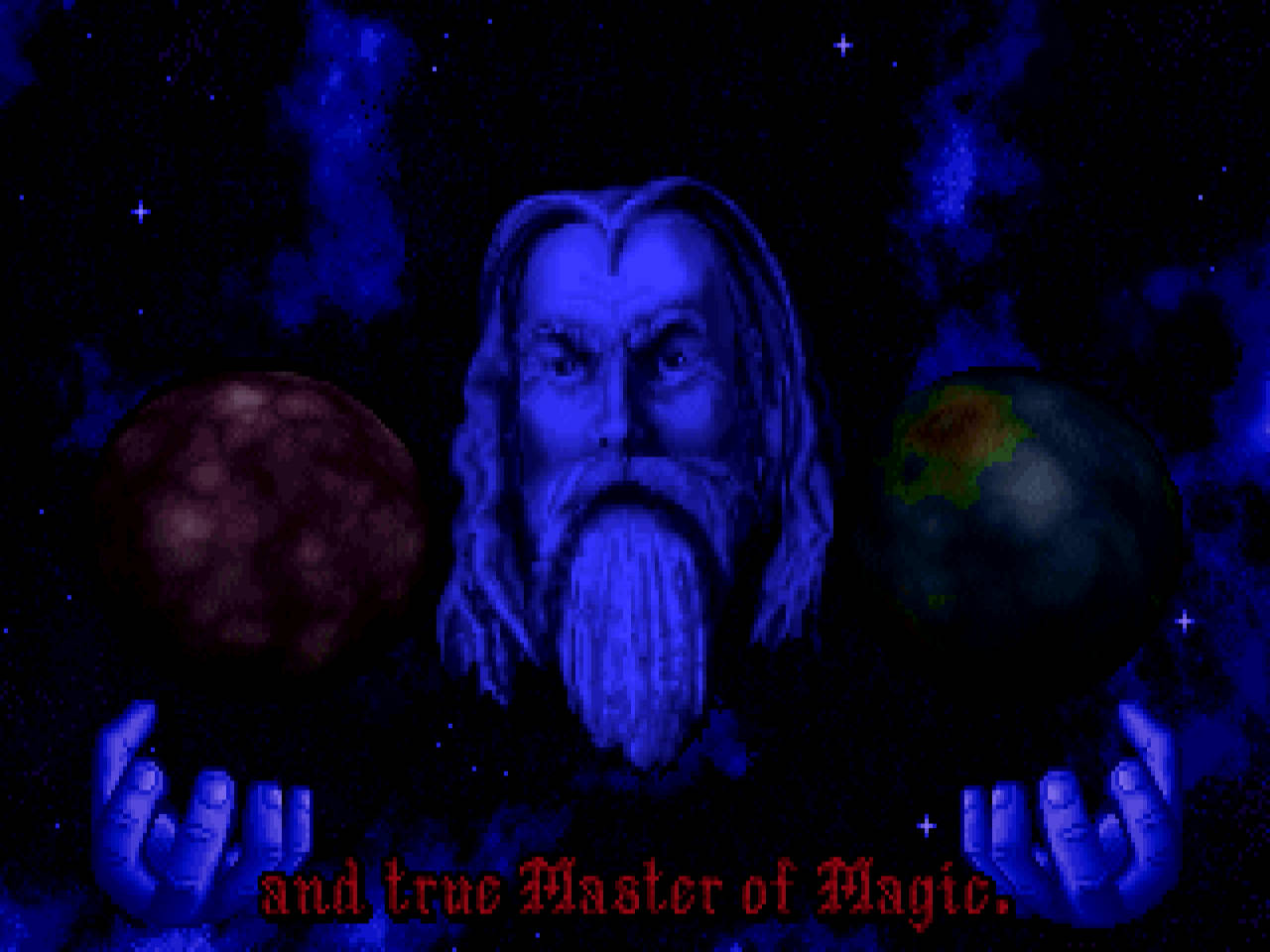 The game world is randomly generated each time you start a new game. Your rival wizards are also randomly selected, so no two games will be alike. You are also free to select what spellbooks you wish to use. You can also choose to pick fewer spellbooks and instead pick retorts. A retort will give you a permanent bonus, and there is a great variety of retorts available. There is even a retort that will let you begin the game on the Myrror world, and select one of the Myrror races. These races are more powerful than the normal races, but this is countered by the Myrran retort costing three spellbook picks, so you are missing out on three spellbooks by making this selection. But this is also one of the things that give this game great replayability.

One unique possibility is to select only retorts and no spellbooks. This will severely limit the number of spells available to you, so you will need to rely more on plain military. On the other hand, the Spell of Mastery will become available a lot sooner. 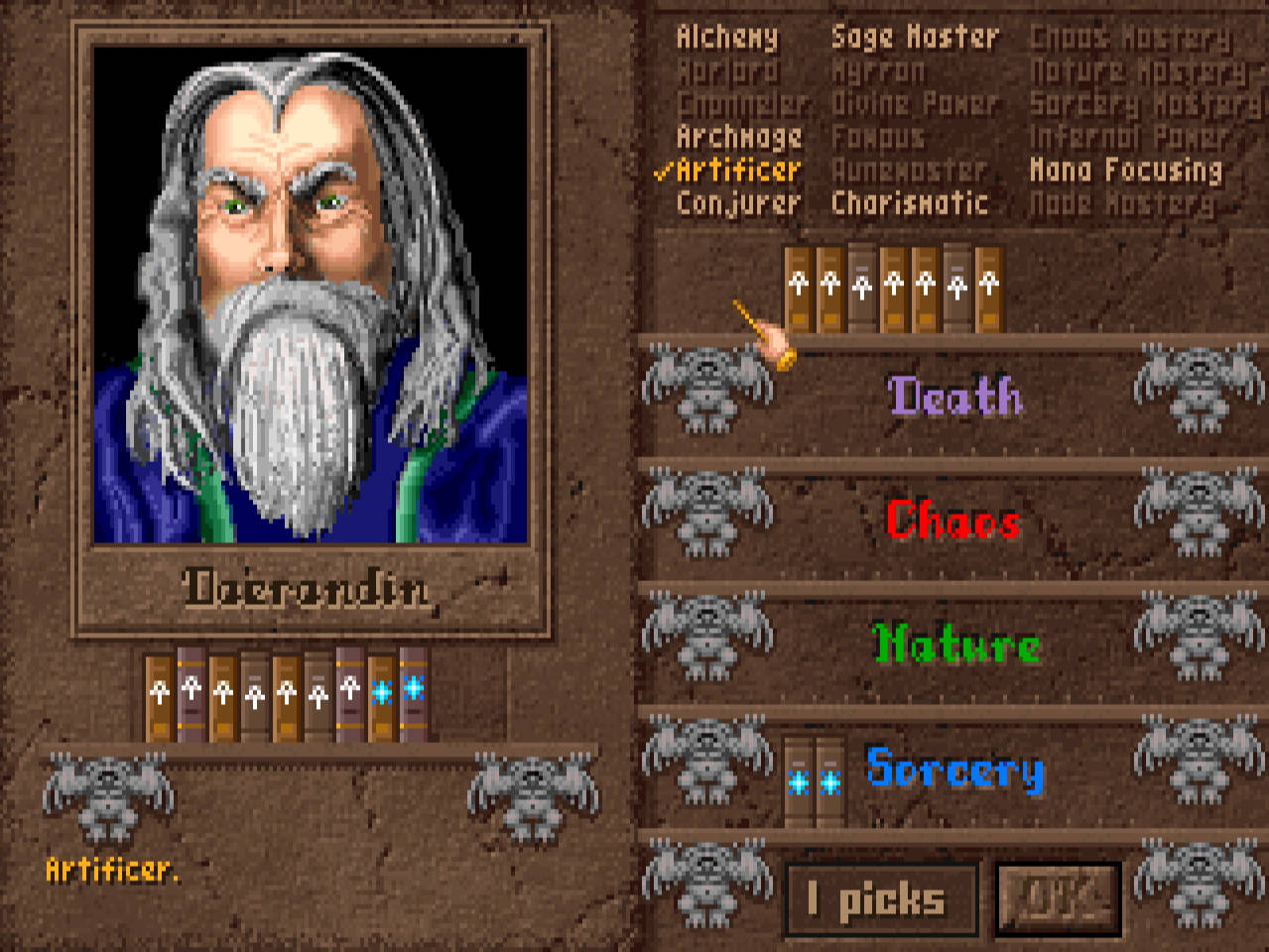 And this is what makes this game so great. You have a vast variation in how you play this game. A wizard with strong focus on Chaos magic will play very differently from a Wizard with focus in a different realm of magic. Your starting race is also important and makes for a big difference in the beginning. Since you can conquer other towns belonging to other races, you get to play with several different races. However, you don't have to do this in case you envision yourself as a xenophobe. You could raze other cities, and instead construct a new city with settlers from your own race. 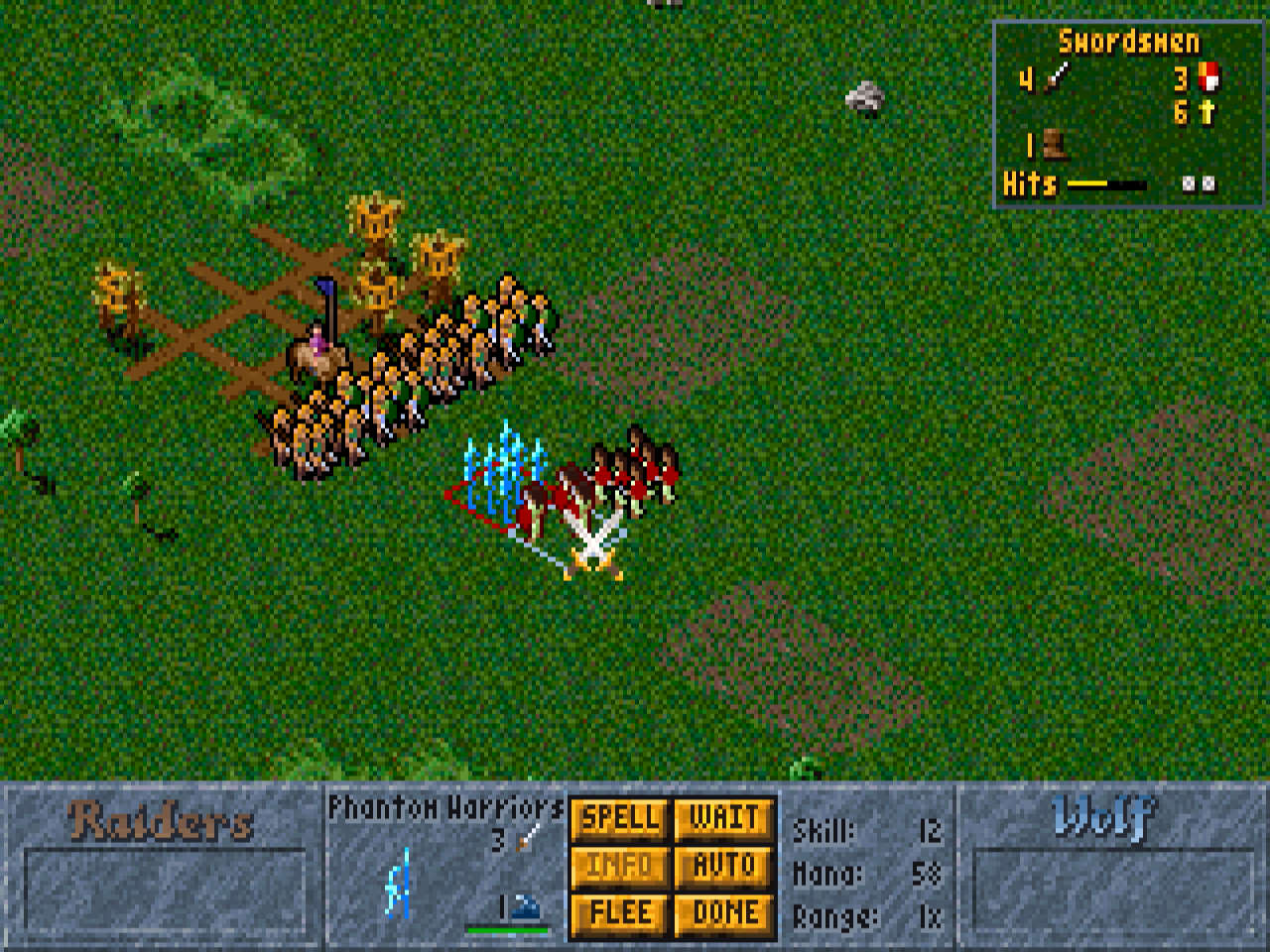 I think the most important keyword when discussing this game is replayability. How you customize your wizard makes a big difference in how the game plays. This is why the game still has a fanbase to this day. The depth of the strategic decisions is something that new games still struggle to capture. That does not mean that there are no downsides to this game. Balance, for instance, is far from perfect. Certain starting races are downright terrible choices that will give you a significant disadvantage. But this is what's fun with this game, you might come up with a special race/spellbook combination that you want to try.

Some people might find the graphics to be too dated, but if this is not a problem for you then I guarantee that the gameplay can rival any new game release. And maybe, if you are worthy, you can become the Master of Magic.