So you want to be a hero?

When I was in elementary school, I would frequently visit an uncle who had a large collection of games, not only for the PC but also for the Amiga. In case you are wondering, Amiga was a computer system not too different from the PC. I would spend a lot of time exploring his game collection, always on the lookout for something fun. Among those games was one gem I will never forget. It crashed when I launched it, with only a half-rendered scene. I could see some rooftops of houses and not much else. After a quick reset I tried it again, and this time it worked. The game was called Hero's Quest: So you want to be a hero I absolutely loved it and played it over and over. Years later I would attempt to find the game again, but every online search would yield no results. If I did find something, it would be some other game I had no interest in.

There is an important lesson in this, be specific in your searches. I was only using the main title "Hero's Quest", which gave me no results. Then one fateful day, I included the subtitle in my search. Suddenly a wealth of information unveiled before me, and it made me feel a little stupid that I never previously searched with the subtitle.

Hero's Quest was released in late 1989, but there was apparently an issue with the name. A board game named HeroQuest was released just before the Hero's Quest computer game. In order to avoid copyright issues, they re-released the game in 1990 under a new title: Quest for Glory. This would only be the first in a series of five games.

Designed by Lori Ann Cole and Corey Cole, it is a hybrid between the adventure and rpg genres. Thanks to the intriguing characters, silly puns and fun gameplay, a large fanbase would grow over time. By modern standards, the game definitely looks dated, and I suspect a lot of people would find the gameplay very unusual. But if you can stomach the colors, dotted shadows and pink pants, read on. 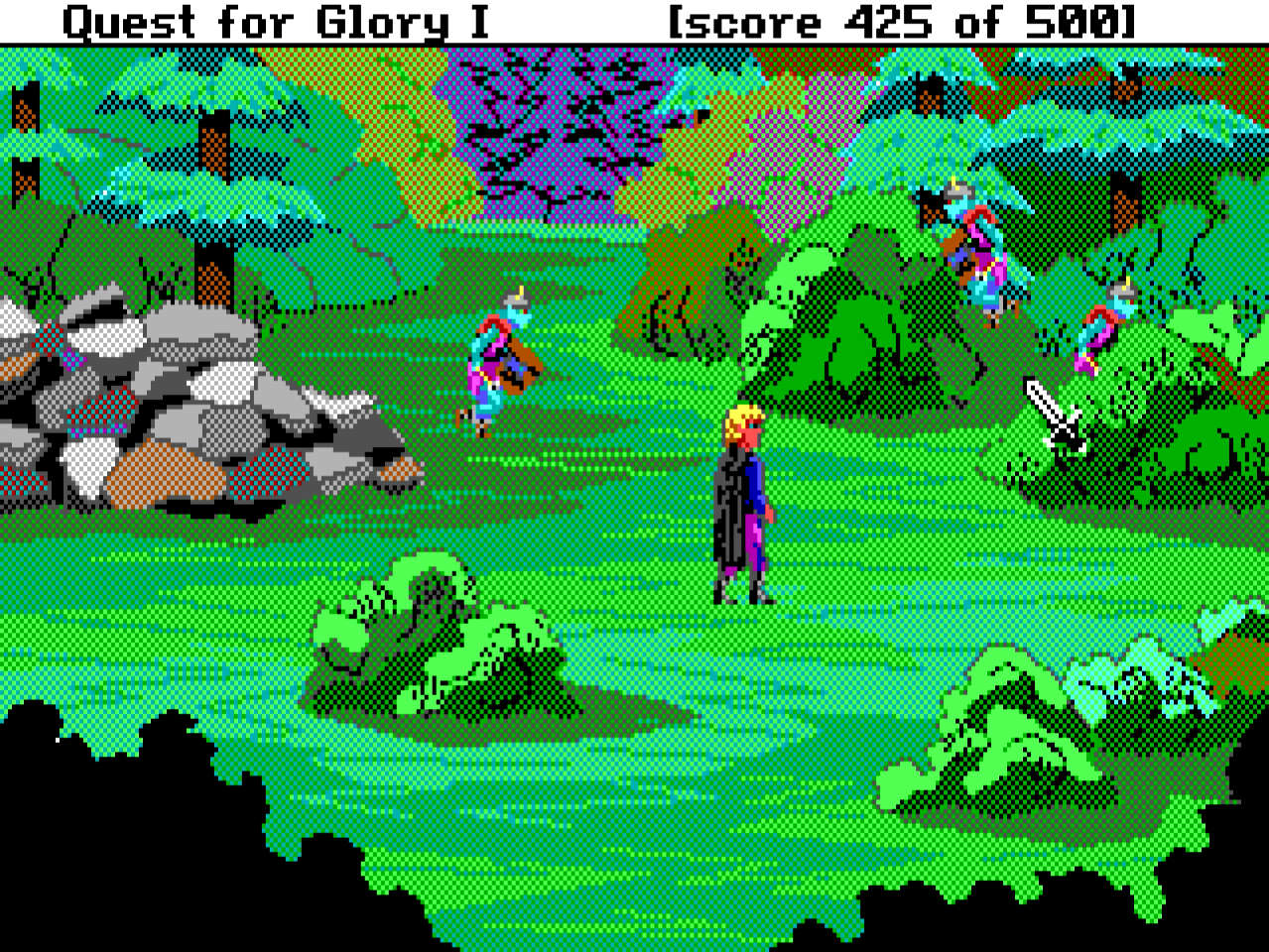 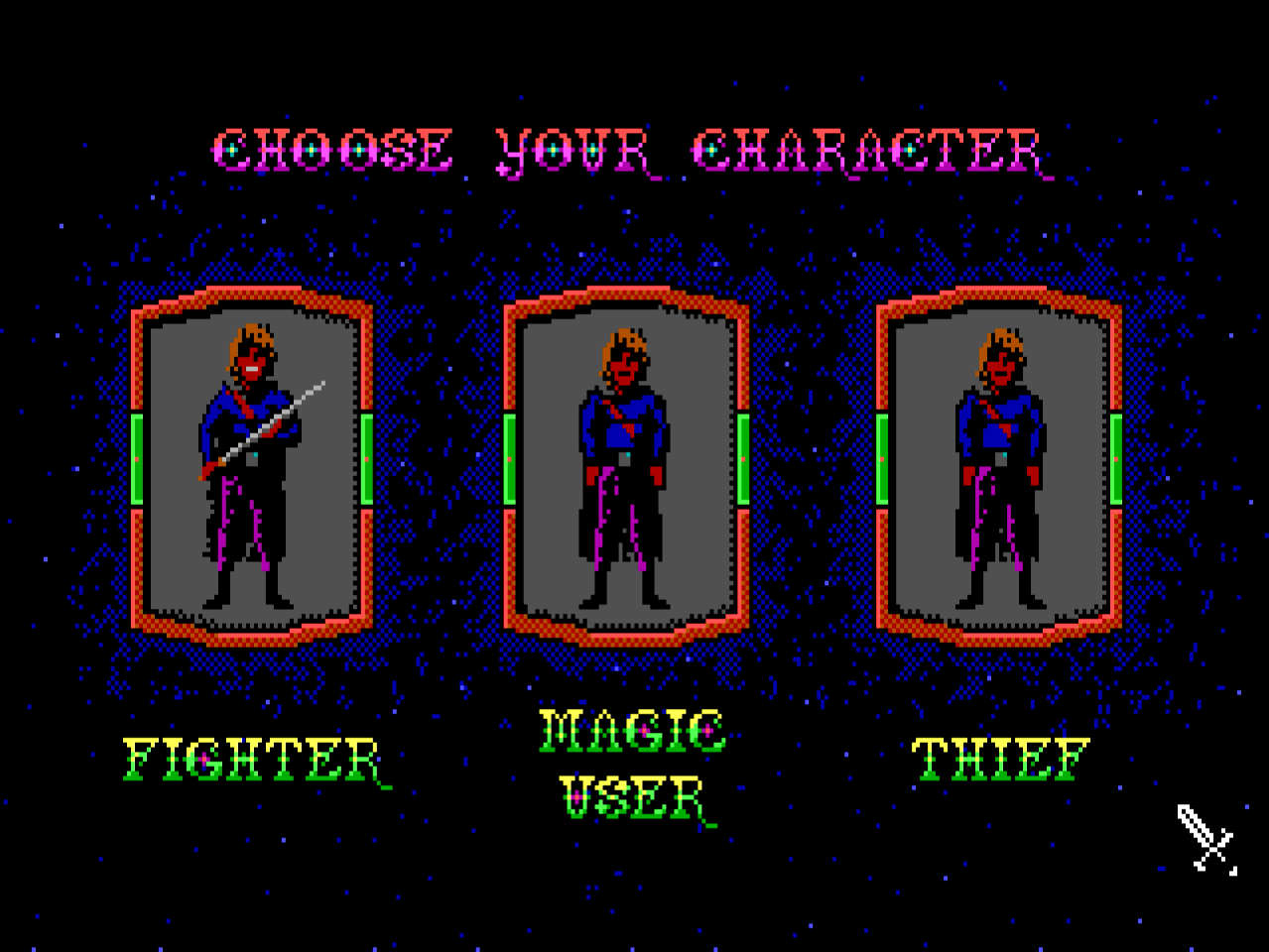 The premise of the game is rather simple. You are a young adventurer seeking glory and the title of hero. You come to a valley that is conveniently in need of a hero. Great misfortune have befell the small town and monsters roam the valley. The Baron's son and daughter have been missing for many years, as a result the Baron has shut himself in his castle. A dangerous band of brigands are terrorizing the peasants as well as any traveler coming to the valley. Everything a young adventurer needs to prove his or her mettle.

You select between three classes when you start the game. The Fighter is the type of character that will bash down the door and fight his way through a tough situation. A suitable choice for anyone who prefer to think with their fists. The Magic User will obviously resort to magic whenever possible. Opening doors through magic, and making dangerous monsters fall asleep through his spells. This calls for a slightly more thoughtful playthrough. The Thief is quite the most unique character in my opinion. Saving the people by day while robbing their houses by night. Seriously, the thief can actually break into houses, steal everything of value and then fence it at the local thieves guild. In fact, this is required to get full score.

The game keeps track of a score. The maximum score is 500, and all three classes can obtain 500 although through different ways. What actions give points seem a bit random sometimes. The score does not affect the game in any way, nor does it alter the ending in any way. The only reward for getting full score is a "Congratulations" after the end credits, that and the satisfaction of knowing you did it. If you are anything like me, you will not be able to sleep if you don't get the maximum score.

Now let's have a more detailed look at the gameplay. Each game area is a rectangular screen. You can move around each screen by using the arrow keys or by clicking the mouse. Items or people can be interacted with by typing commands. For instance, if you are attempting to open a door, you would type "open door". If you want to ask an NPC about the town, you type "ask about town". As you may imagine, this means a lot of typing and may seem very odd to younger readers. However, this was actually a very common gameplay mechanic of the late 80's adventure games. 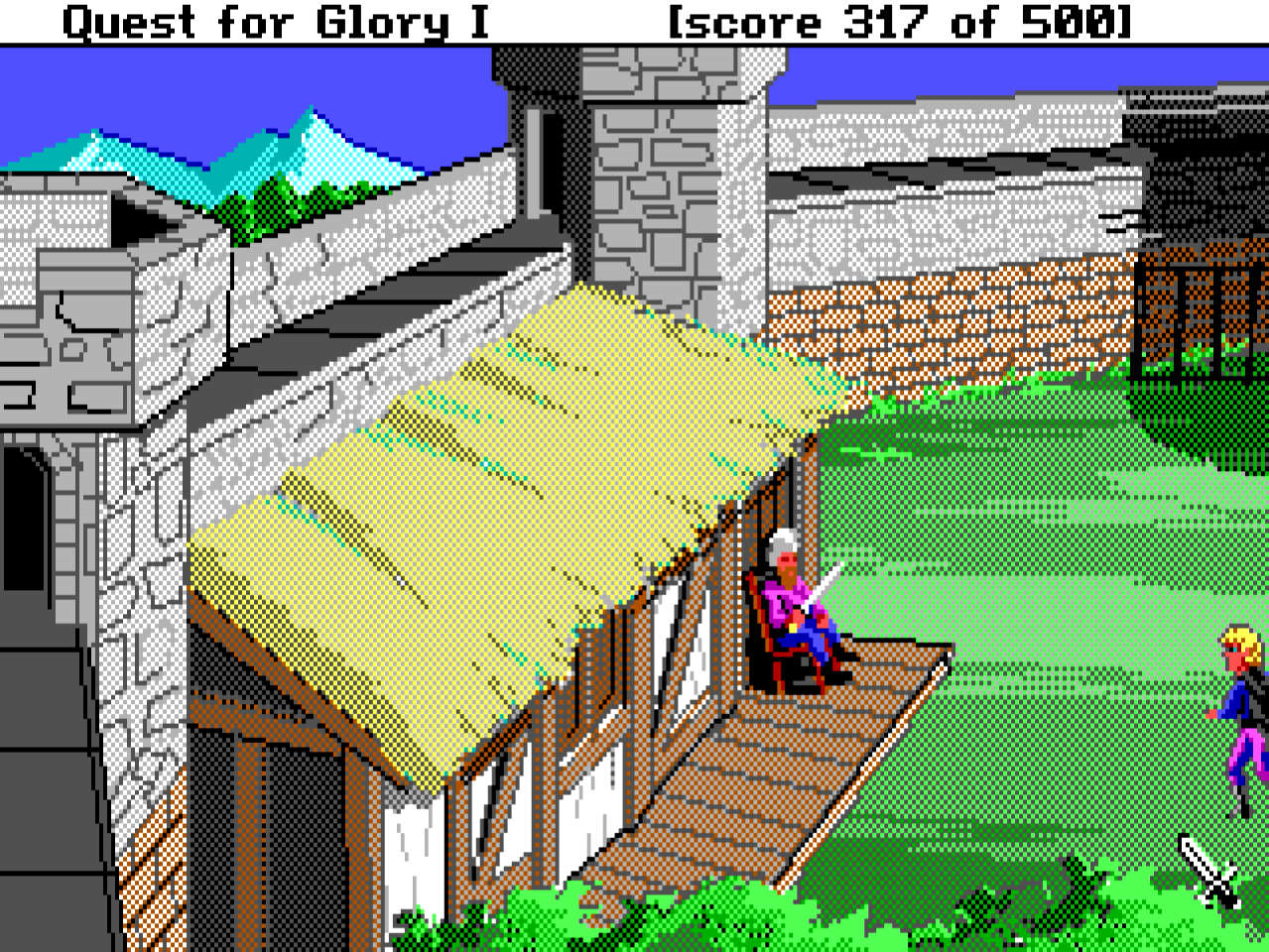 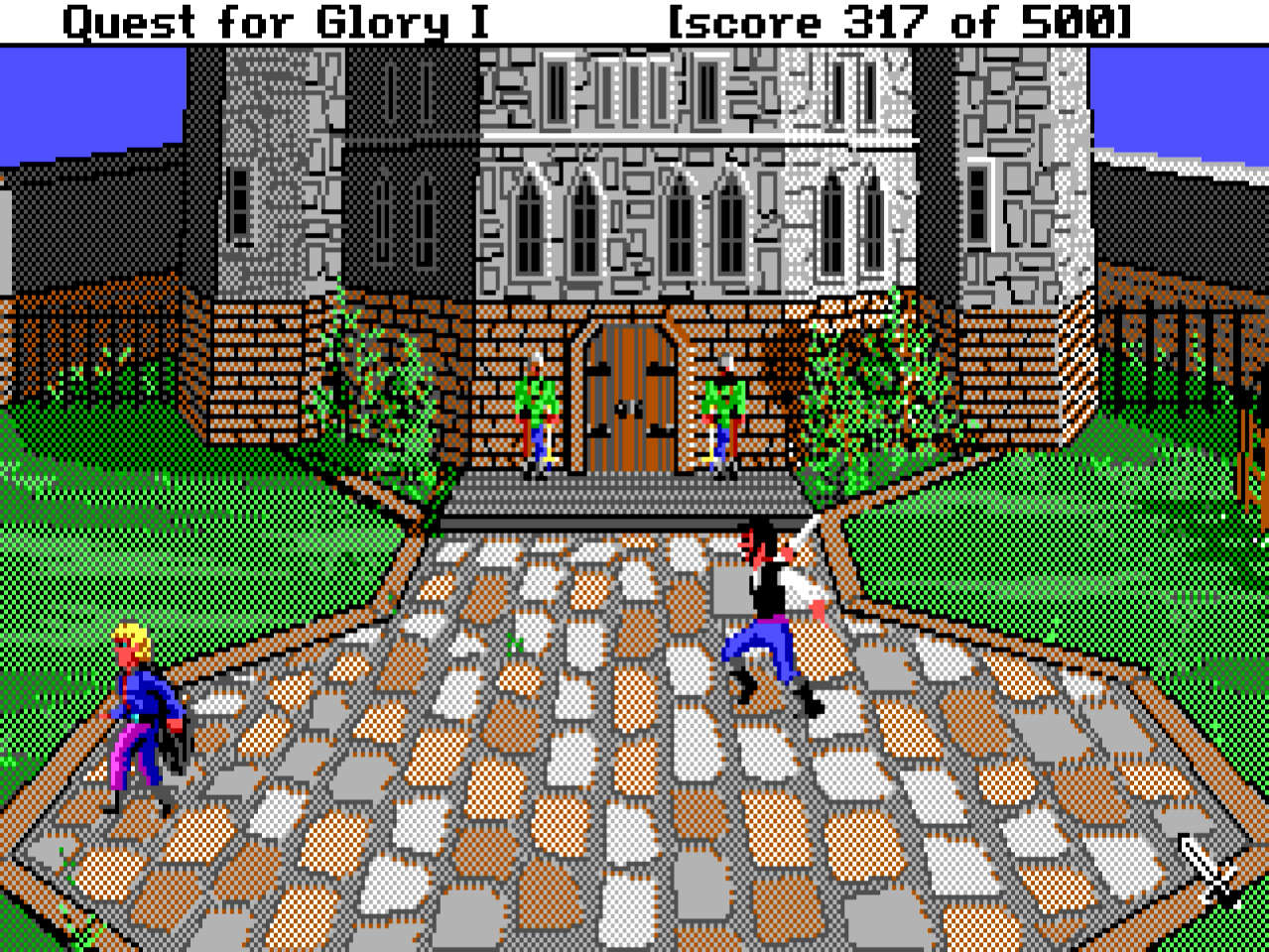 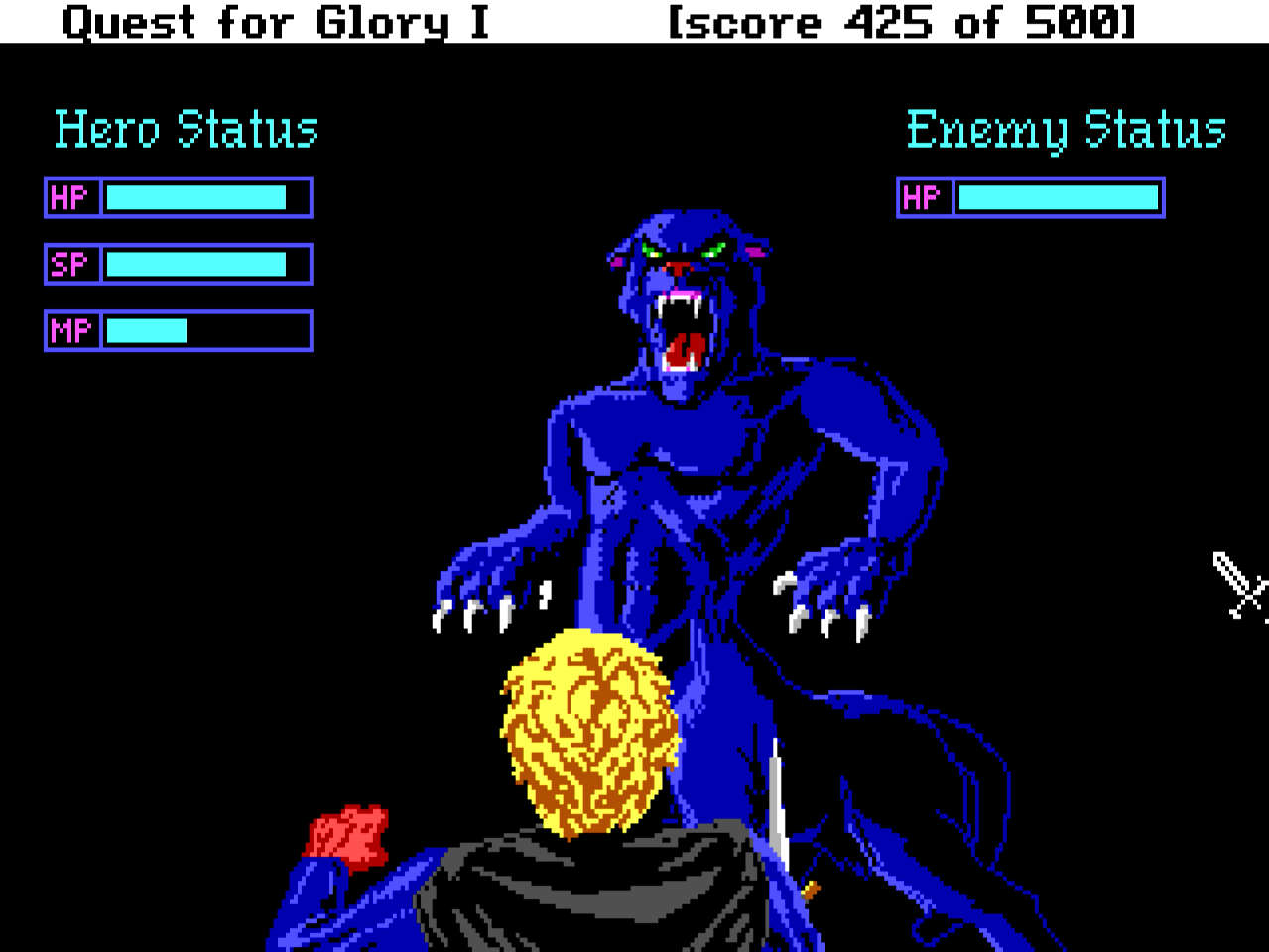 Whenever you move to one of the edges of the screen, you will travel to the next adjacent screen, unless something is blocking your path. There is no in-game map, so players have to draw their own map as they explore. Drawing a map might seem tedious to some people, but thankfully this game has a rather small world. Another option is to search for "QFG1 map" in your favorite search engine. There are lots of well done maps available.

Despite the rather small world in the game, I still feel like I can get lost wandering through the forest. Monsters appear randomly as you enter new areas, so you never feel completely safe. This adds a bit of atmosphere, giving you incentive to be careful whenever you need to go into the forest.

Then there is the night. When darkness settles over the valley, you better hope that you are somewhere safe. While the monsters at day may challenge a fresh adventurer, surviving a few fights will quickly make the daytime enemies seem easy. But as soon as darkness settles over the forest, things are very different. Very dangerous, and fast, monsters appear. I still get scared whenever I see the massive cheetaur charging towards from in the darkness.

Playing the game is mostly a non-linear experience. You can freely explore the valley and play out your days as you wish. When I was originally playing this game, back when I was a wee boy, I didn't really know how to progress the game story. Instead, I would spend my days by cleaning the stables, having an ale at the bar, and then possibly taking on a goblin or two. This is obviously not a productive way to play the game, I suppose I was not among the brightest during my younger years. However, it illustrates how free you are to do what you want. Even plot important events are mostly dependent on your actions, so it is only your actions that determine the game progress.

This game has RPG elements, which means that you start out with fairly low statistics. Unlike most modern RPG's, there are no "leves" in this game. Instead, you improve a skill or statistic by using it. The more you swing your sword, the better you do it. The funny thing is that this makes it possible to improve skills by not really doing anything. As a magic user, you can practice your Open spell, by casting it on nothing, it will still improve. The thief can practice lockpicking on doors that can't be picked. You can even pick your nose to improve your lockpicking skill, just don't try it when your skill is too low. It will have fatal conseqences.

All statistics have a maximum of 100 and most can be improved all the way. When you complete the game you can choose to import your character for the next game in the series. If you take the time to improve your skills a lot, it will make the beginning of QFG2 significantly easier. 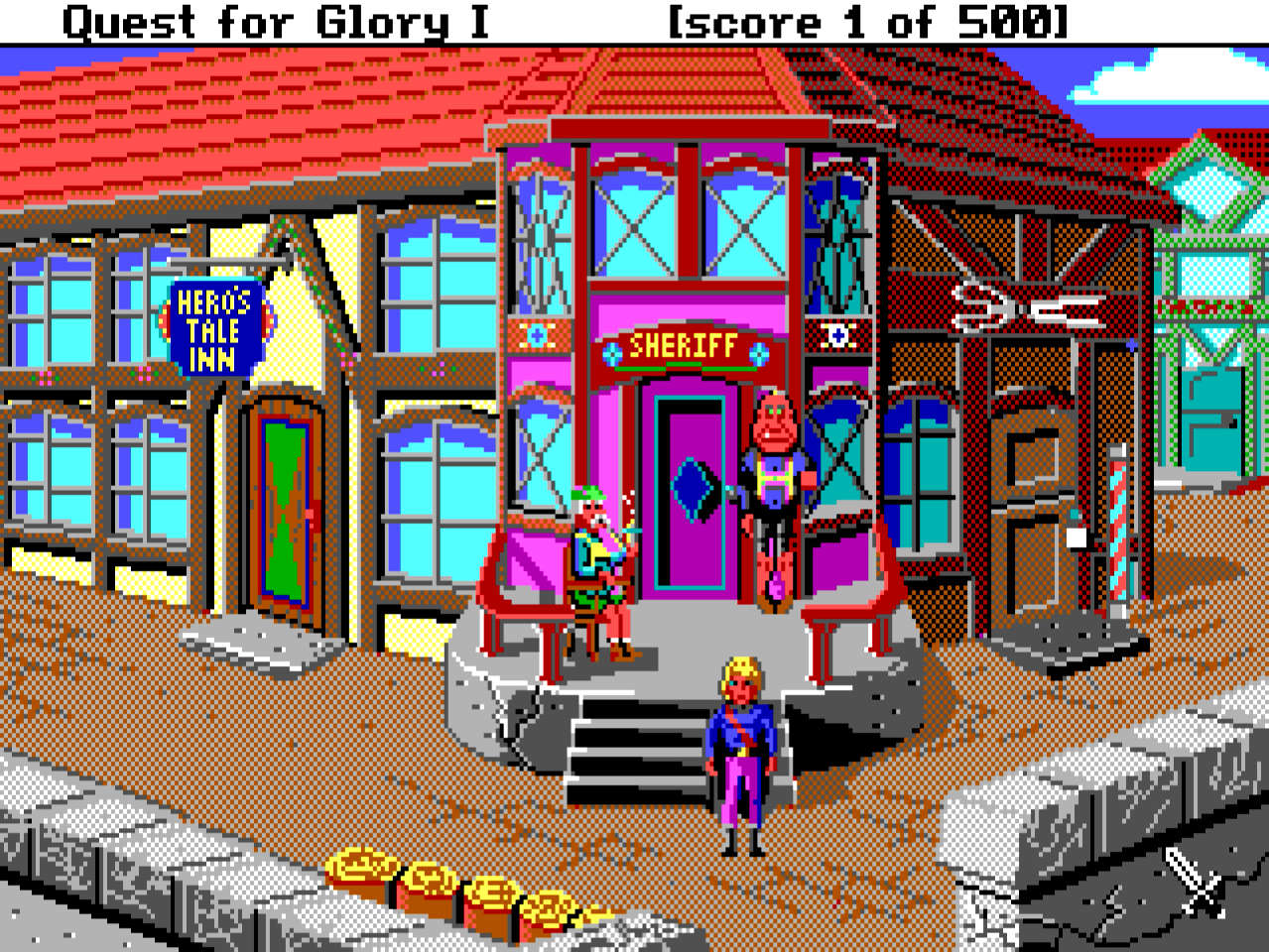 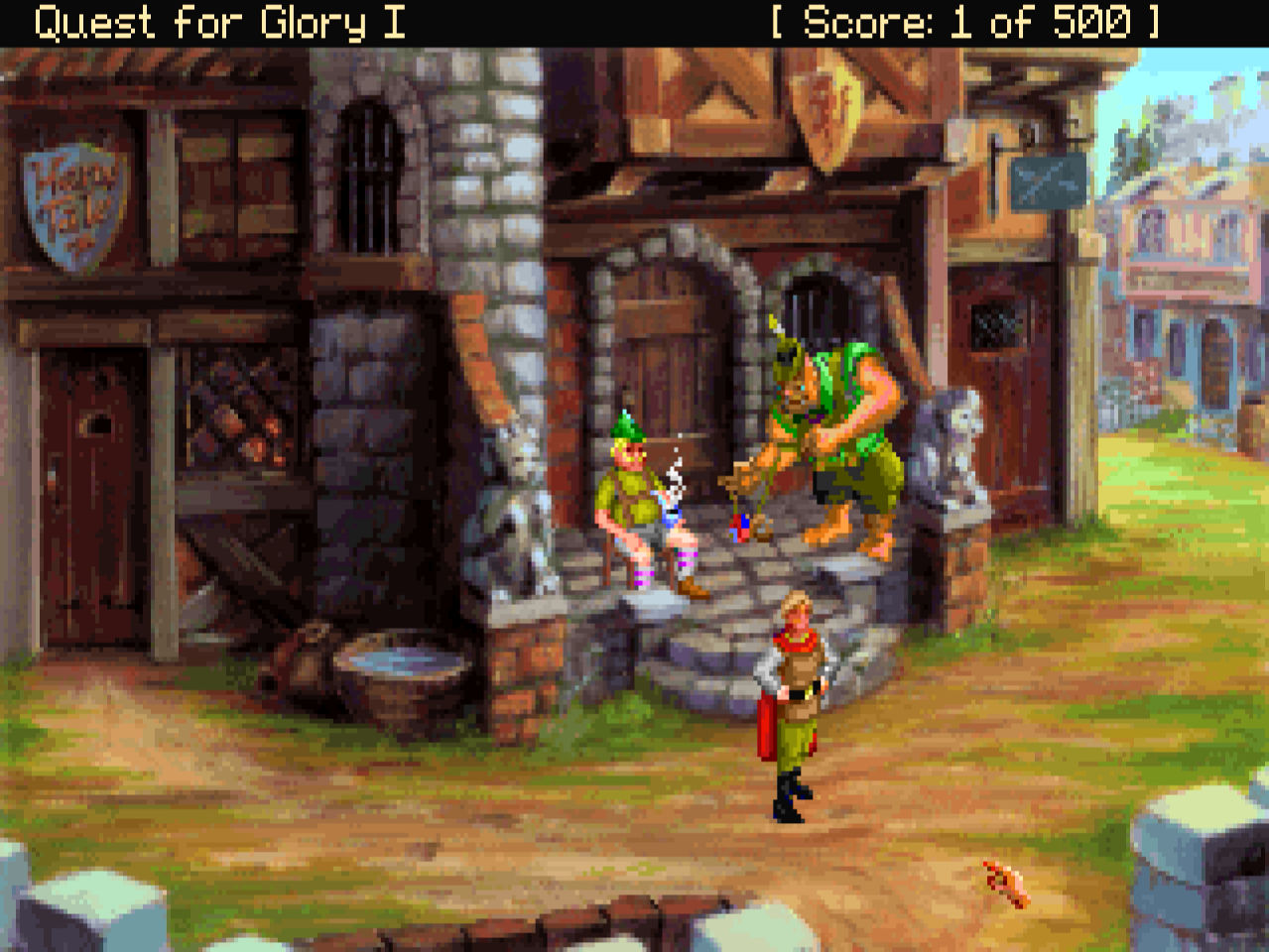 The game had a VGA remake in 1992, with much improved graphics. The screenshots above are both at the start of the game when you enter town. The remake is definitely more pleasing to the eyes. Gameplay was also changed slightly. Instead of the text input, the mouse has different modes. Right clicking will cycle through the mouse modes and a left click performs the indicated action. The cursor will change according to the mode. Feet for walking, an eye looking, a mouth for talking and a hand for interacting. This is clearly more intuitive for first time players and is likely make the game much more accessible to a broader audience. But apart from these changes, the game is the same. 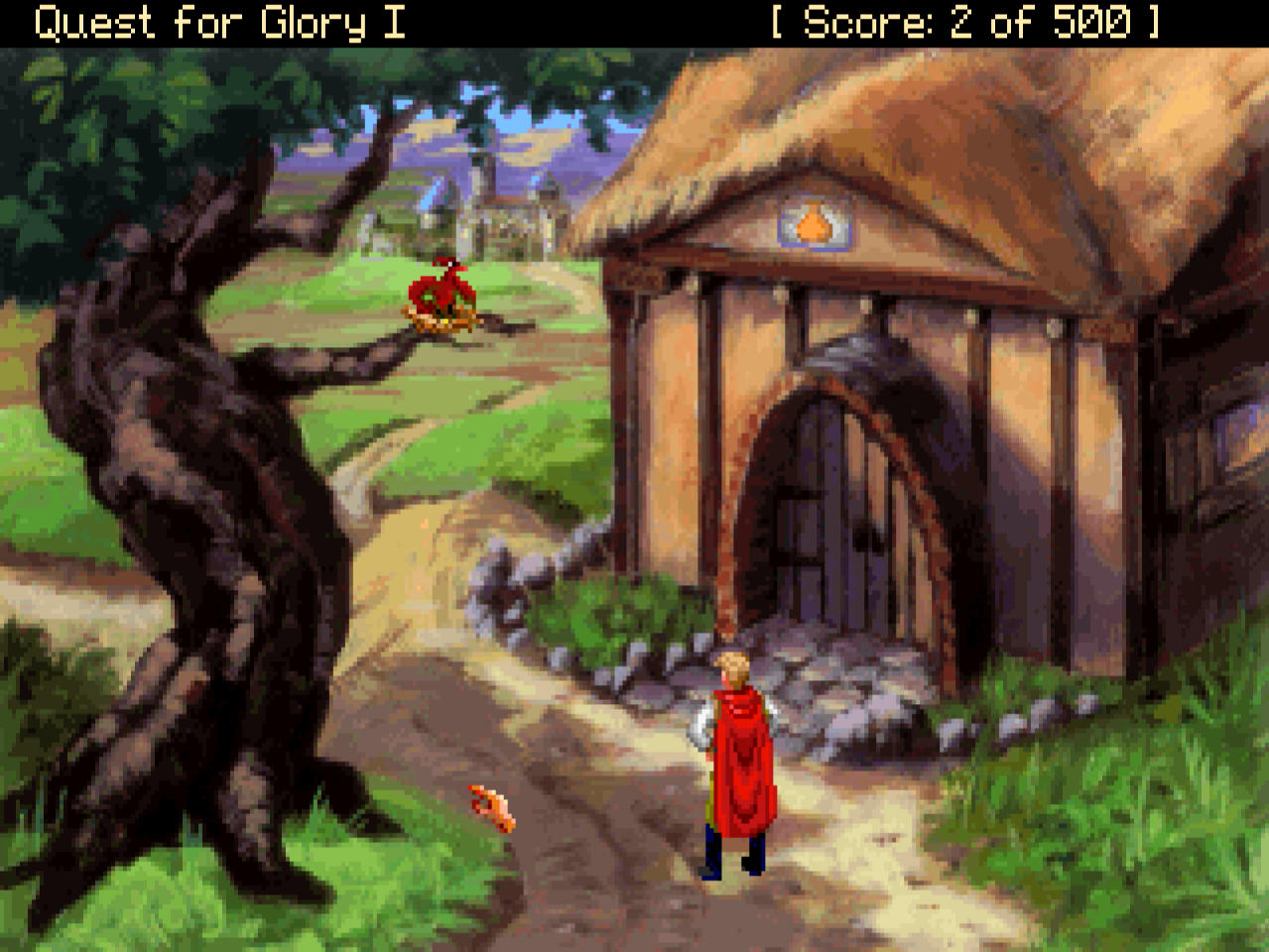 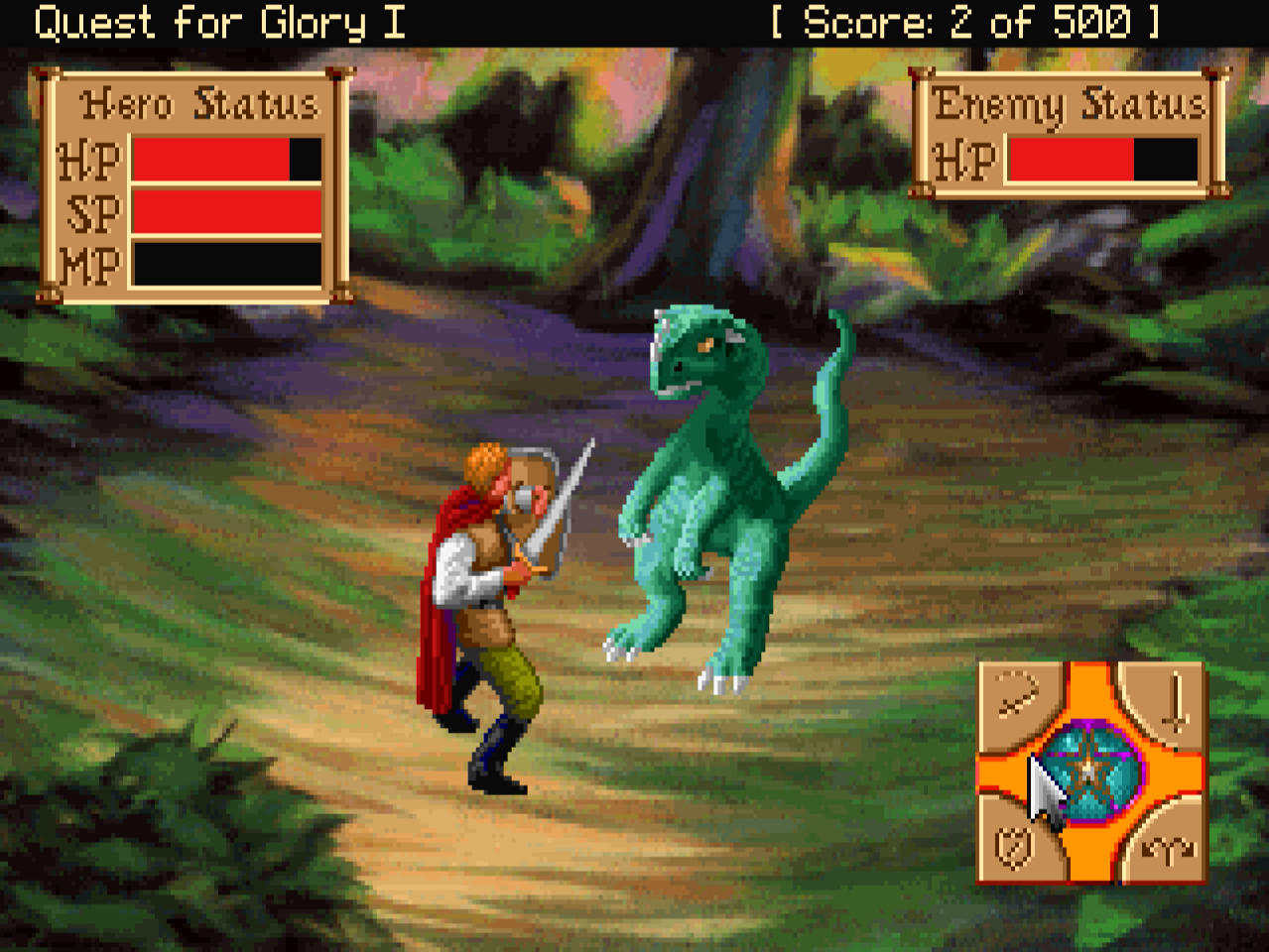