Shroud of the Avatar Collectors Box

Massively Multiplayer Online Role Playing Games, or MMORPG's, is something I generally don't spend time on. Interacting with other humans is something I tend to find annoying at best. When I sit down to play a game I want to be able to immerse myself into the story and world. If some character comes running up to my character, shouting leet-speak, my immersion is generally ruined. This does not mean that I dispose all kinds of multiplayer, playing with friends is often a rewarding experience that I enjoy. Shroud of the Avatar was an MMORPG that I was genuinely interested in when I first heard about it. It was being crowdfunded, and in addition to the full multiplayer experience, you were also supposed to be able to play alone, or only with friends. I ended up backing the game, and this year it got the full release.

For this article I don't intend to talk about the game itself, I'm saving that for when I've played it enough to feel confident that I can give it a good and honest review. For now, I want to take a look at the Collector's Edition box I got as a reward for backing the game. I grew up when games normally came in big boxes, and it was not unusual for these boxes to contain a fancy manual, as well as a map of the game world. Nowadays, this is not so common and usually only comes in collectors editions. 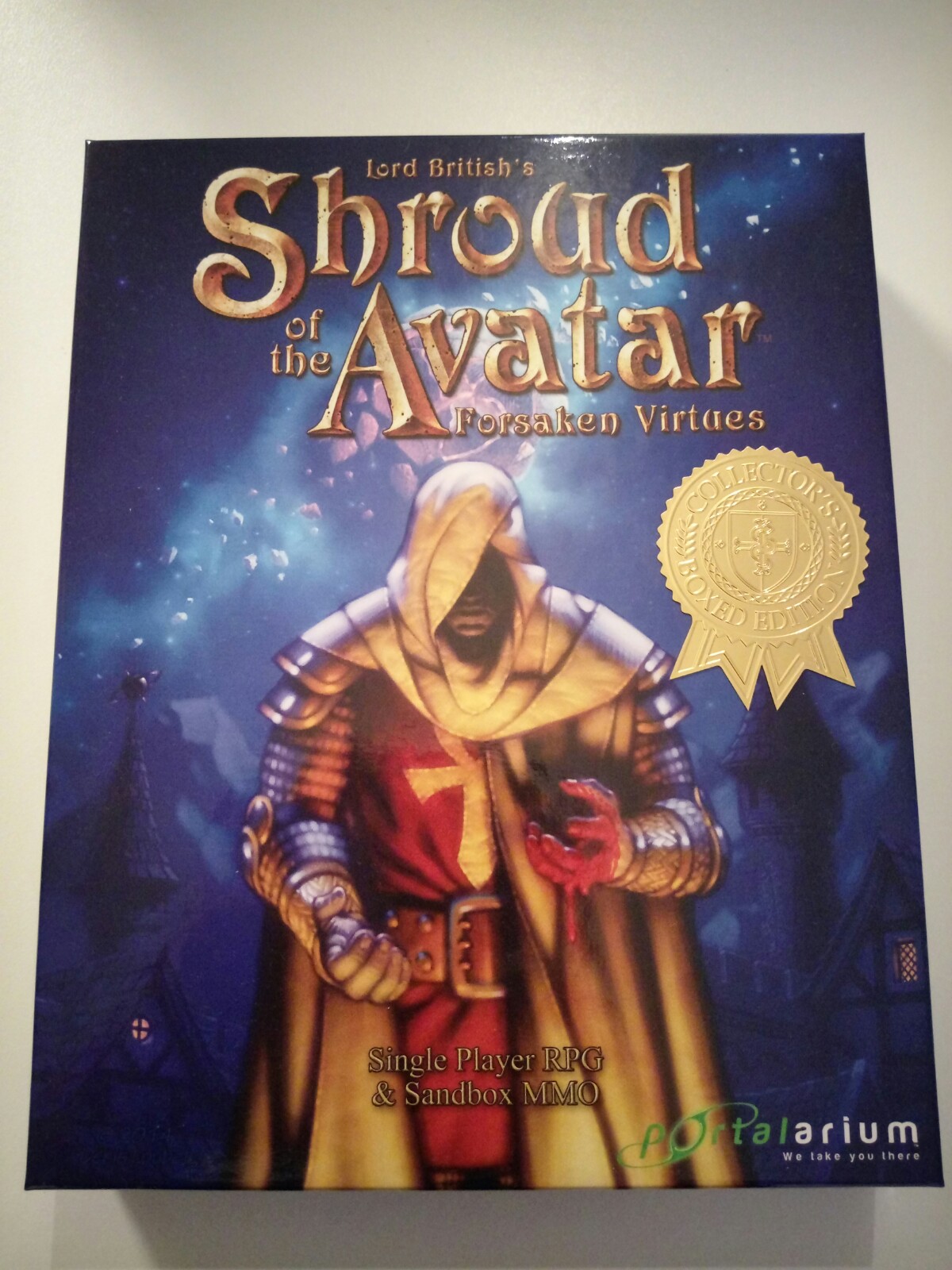 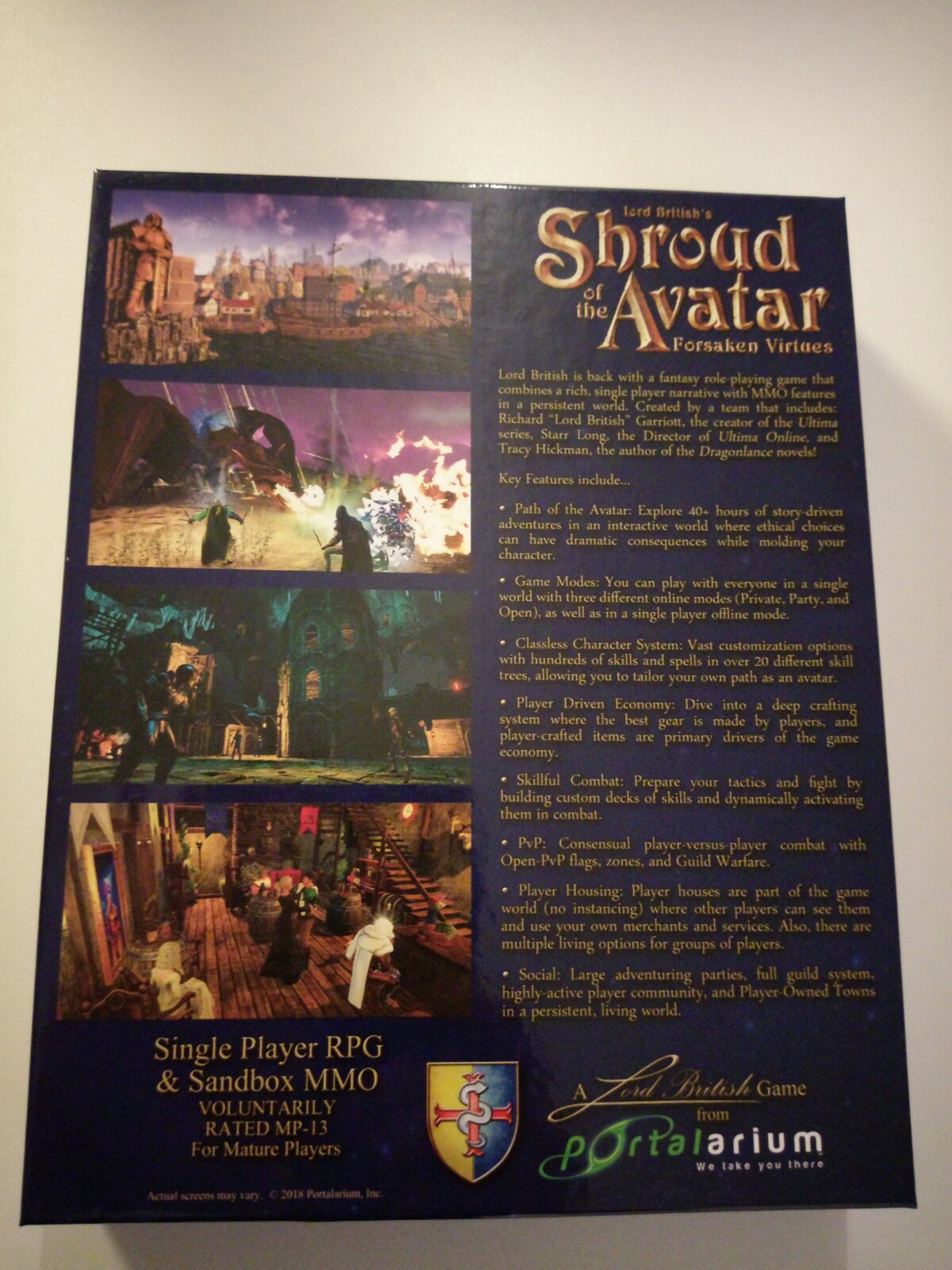 So let's have a look at this box. First of all, the artwork is cool. It also got a nice golden sticker which indicates that it is a collector's edition. Even if you know nothing about this game, just a glance at this artwork will instantly let you know that this game is of the fantasy genre.

Personally I also like the style of the artwork, it reminds me of box art from the late 90's and early 2000's. For someone like me, this instantly gives me a feeling of familiarity and maybe even a slight sense of nostalgia. I feel like I am stepping into known territory, and that is certainly a comforting sensation. I realize a lot of people might not place much import on the box art, but for me it is a part of the experience. 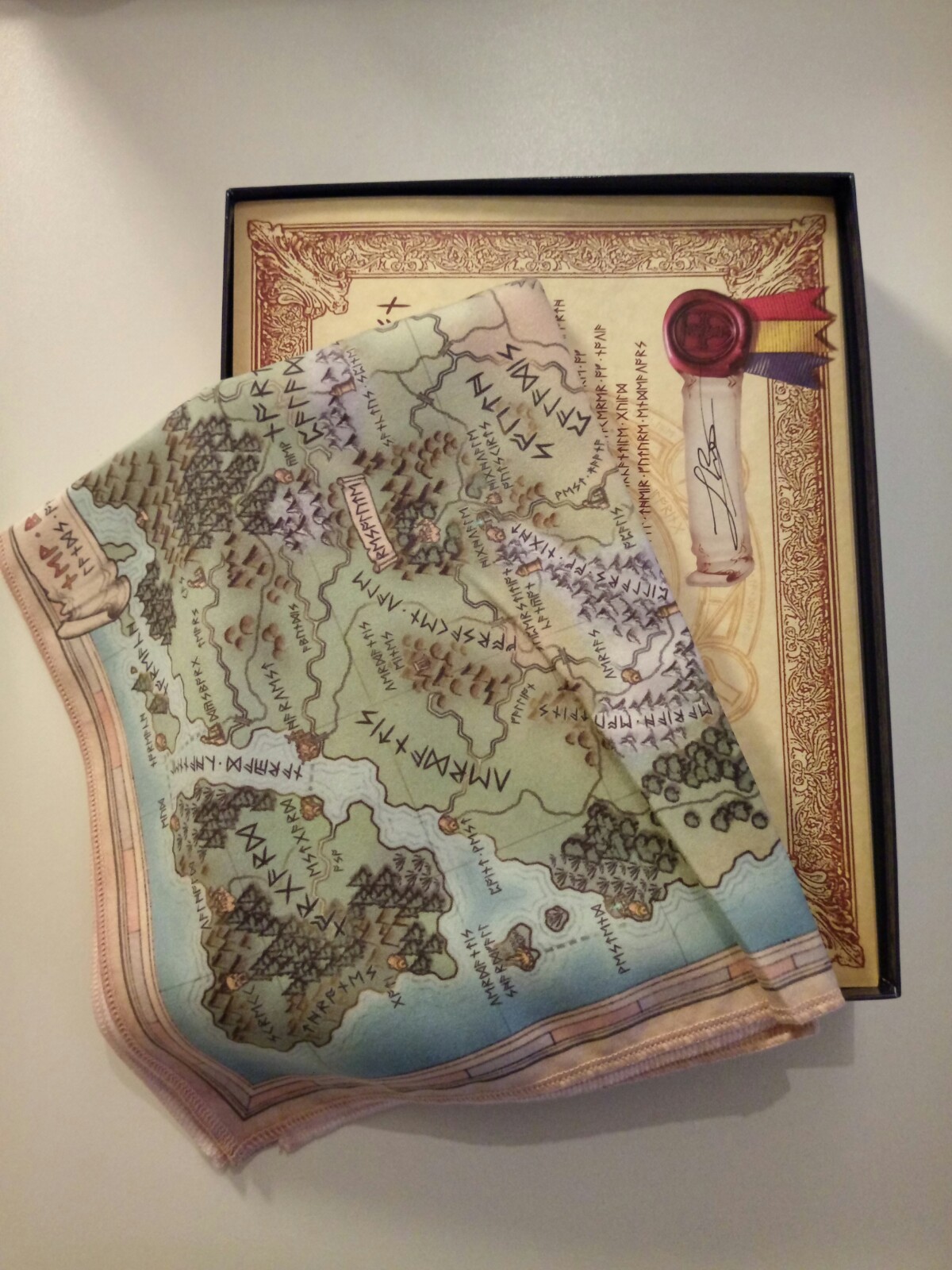 Opening these kinds of boxes is always an exciting experience. There is usually a lot of goodies inside, some of which might look nice hanging on a wall. This box was certainly no exception. The first thing I saw when opening, was a really cool cloth map. A game map used to be a staple in pretty much all game boxes for rpg's, so I was quite happy to find this.

Cloth maps are also especially nice since they last longer than paper maps. You can hang it on a wall, if you wish, without needing to worry about it tearing. This particular map looks extra cool since all text is runes. While this might look cool, it also has a downside. Should you wish to actually read anything on the map, then you need to translate the runes into the Latin alphabet before you can read it. Thankfully the game box also comes with a paper which shows the corresponding Latin letter for each rune. Another option would be to actually learn the rune alphabet used, although I suspect this is beyond the interest of most gamers. I will certainly not learn the rune alphabet just to read the map more conveniently. Especially since there is a detailed map of the game available online.

The map is also signed by Richard Garriot as "Lord British". In my opinion, the map is the coolest item in this box. However, I have always had an interest in maps, so this is probably why I find this map so fascinating. Having an actual map make the game world feel more alive to me, and it triggers my desire to explore all parts of the world, just to see what is there. 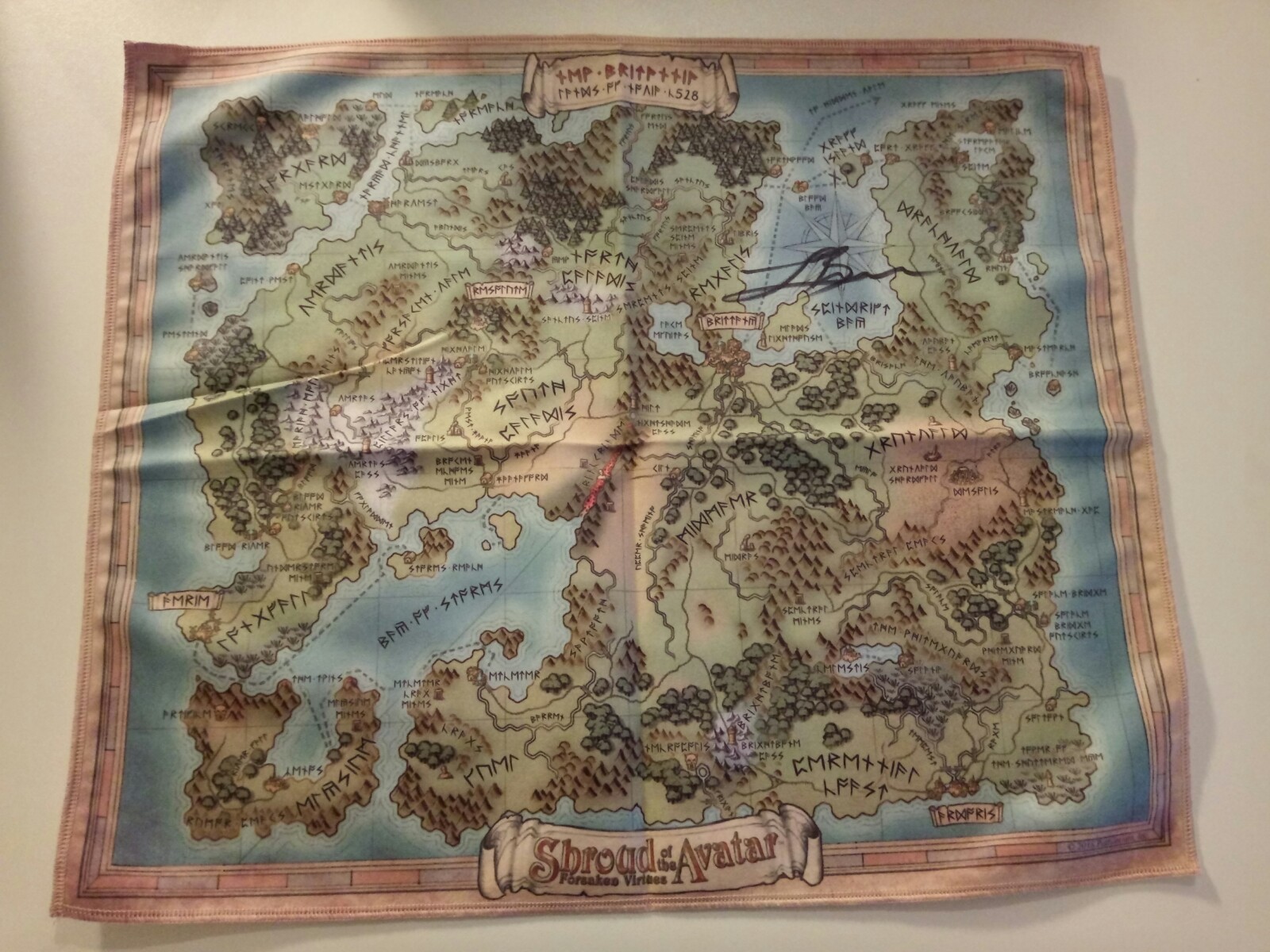 I found the game manual to be quite interesting. The player is directly addressed, but with the assumption that the game world is real and the player is really entering another world. I personally find this type of manual to help my immersion into the game. It also reminds me a lot of the game manual for Might and Magic VI, which had a similar style of writing.

There is also a booklet showing an old Dungeons and Dragons session from Richard Garriot's youth, as well as the handwritten Book I of the Tales of Mondain. I could certainly see some of my own youth in this, both DnD as well as the the creation of stories. 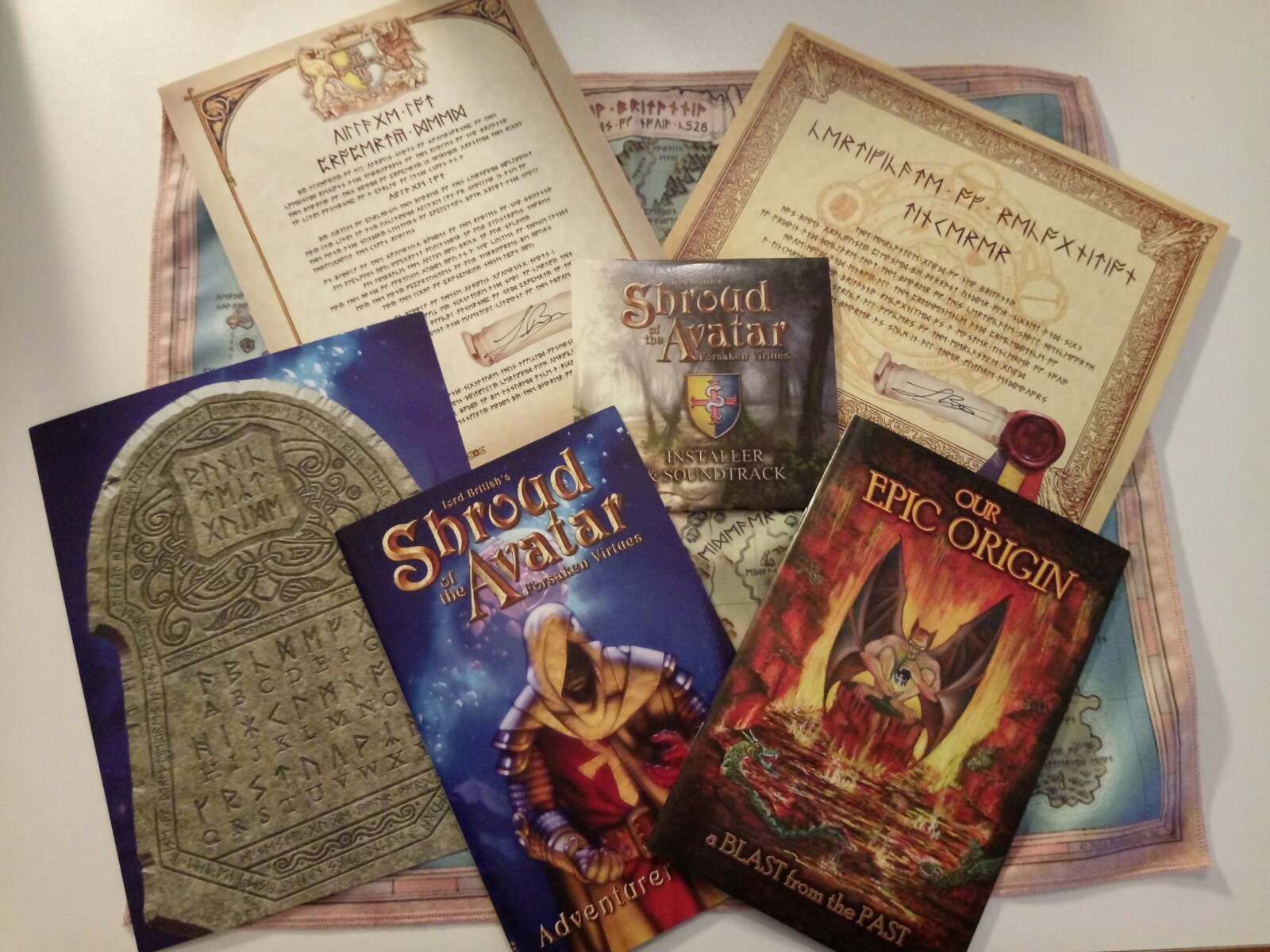 There are also two papers, written in all runes. The paper feels more like old parchment. One is a property deed, indicating my ownership of property in the game world. The other is a certificate of recognition by the mercantile guild of New Britannia. Since they are both written in all runes, I had to sit down and translate them, letter by letter.

The provided disc contains the game installer as well as the soundtrack. I always enjoy game soundtracks, so this was a very welcome find. As for the installer, I never actually tried it from the disc since I also have the game on Steam and I generally prefer digital copies of games.

Lastly, there were two more objects in the box. An ankh and a coin, both were of high quality. The ankh has always been a prominent symbol in the Ultima series lore so it was no surprise to find it in the box. 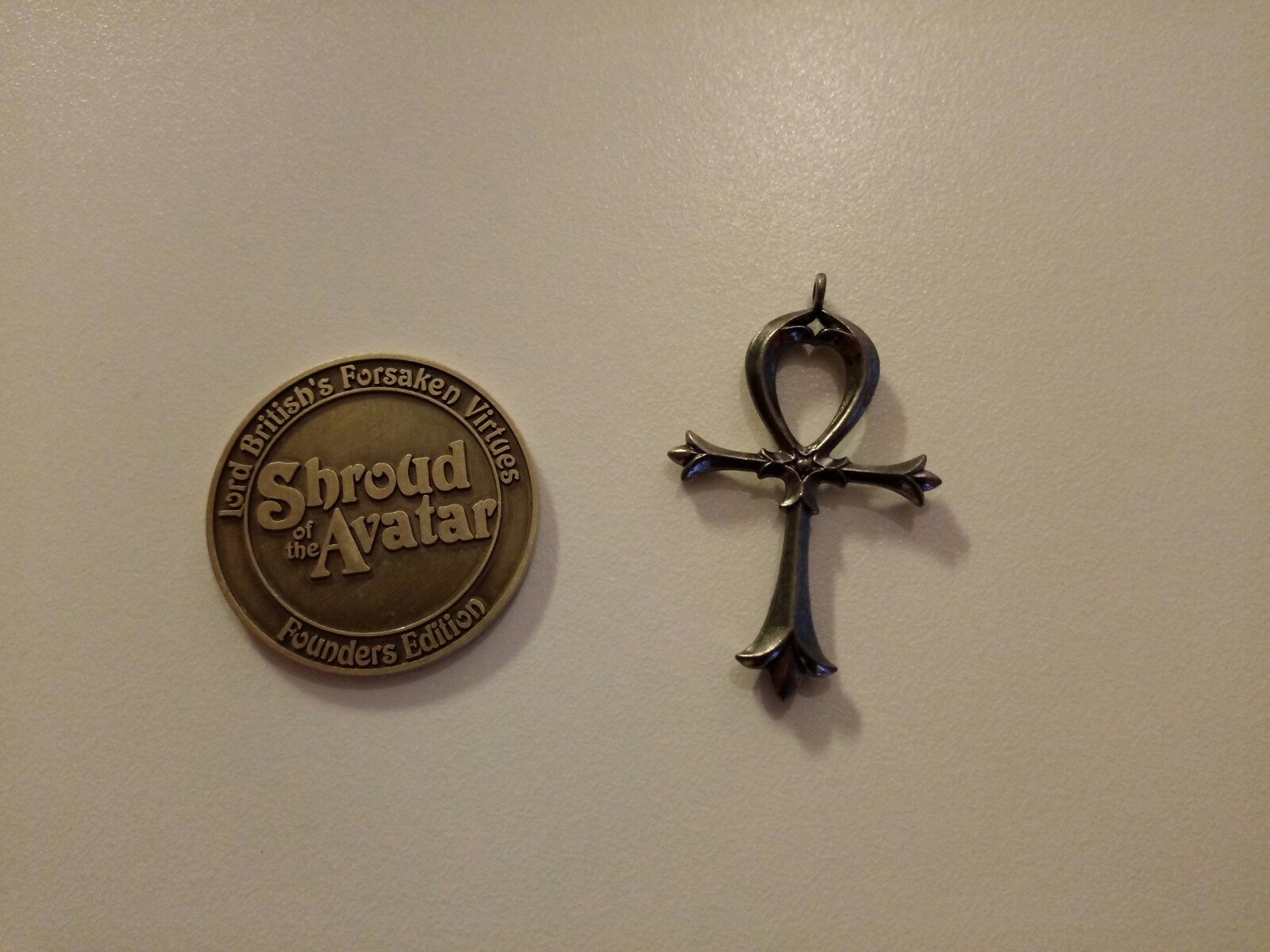 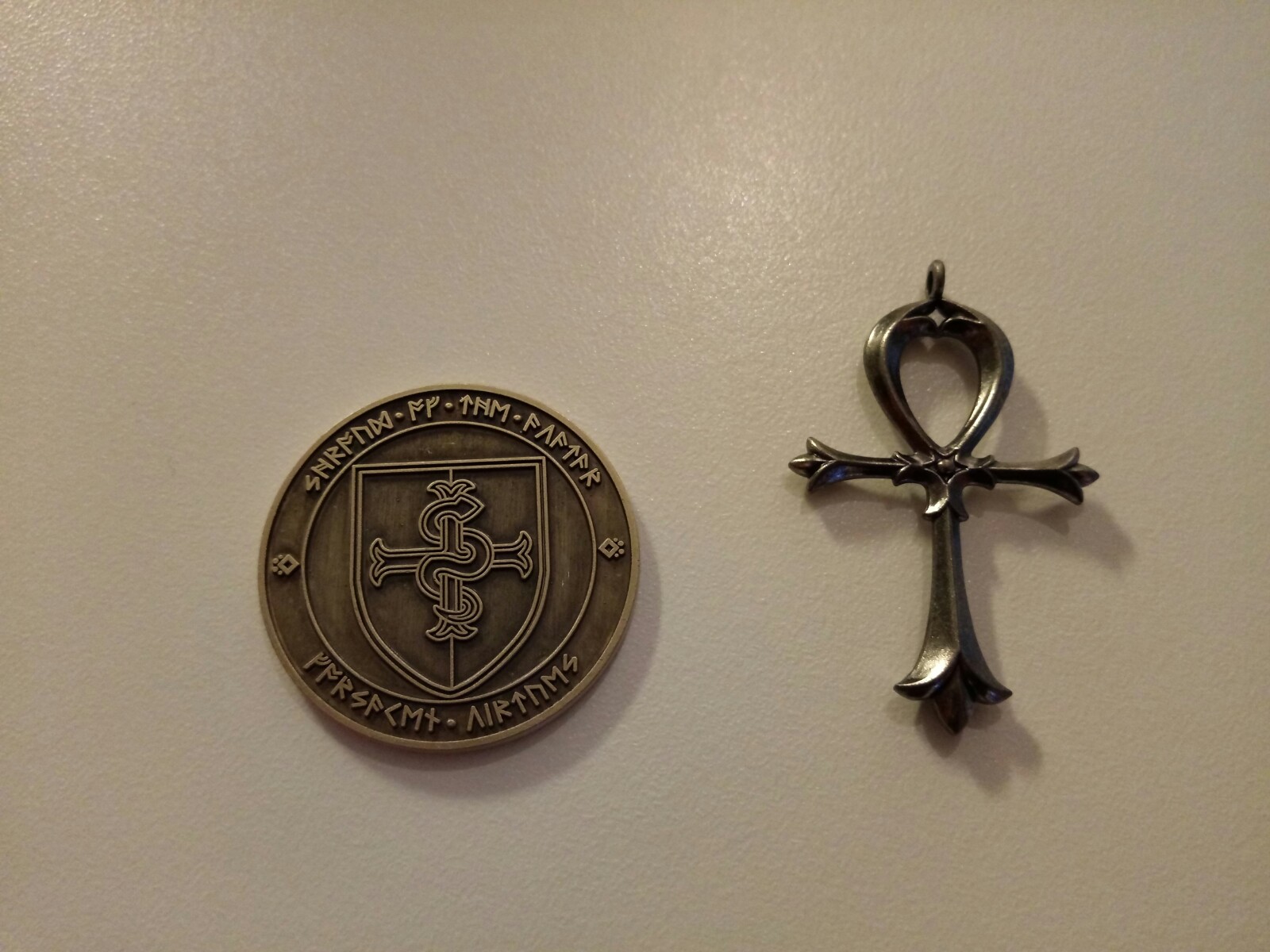 This collector's edition was definitely a treat, and I must admit that my respect for the game developer is greatly increased by the effort they have put into this box. After looking through these items I feel very motivated to play the game.