In 1989, Games Workshop released the Space Hulk board game.

The game is set in the Warhammer 40,000 universe, and takes place on old derelict spacecraft and other space debris that has been fused together after drifting for centuries. These ancient vessels are referred to as space hulks. As a space hulk drifts through space, as well as the warp, they might come close to inhabited planetary systems. Usually a space hulk is infested with aliens which would pose a great threat to the inhabitants of any world it comes close to. In other cases there may be ancient relics lost on the space hulk. For this reason, Space Marines will often send boarding parties, and because of the dangerous nature of a space hulk, these boarding parties are usually clad in Terminator armor. A very common enemy to be found on these space hulks are the feared Genestealers. And that is the premise for the board game. Space Marines in Terminator armor fight Genestealers in tight corridors. 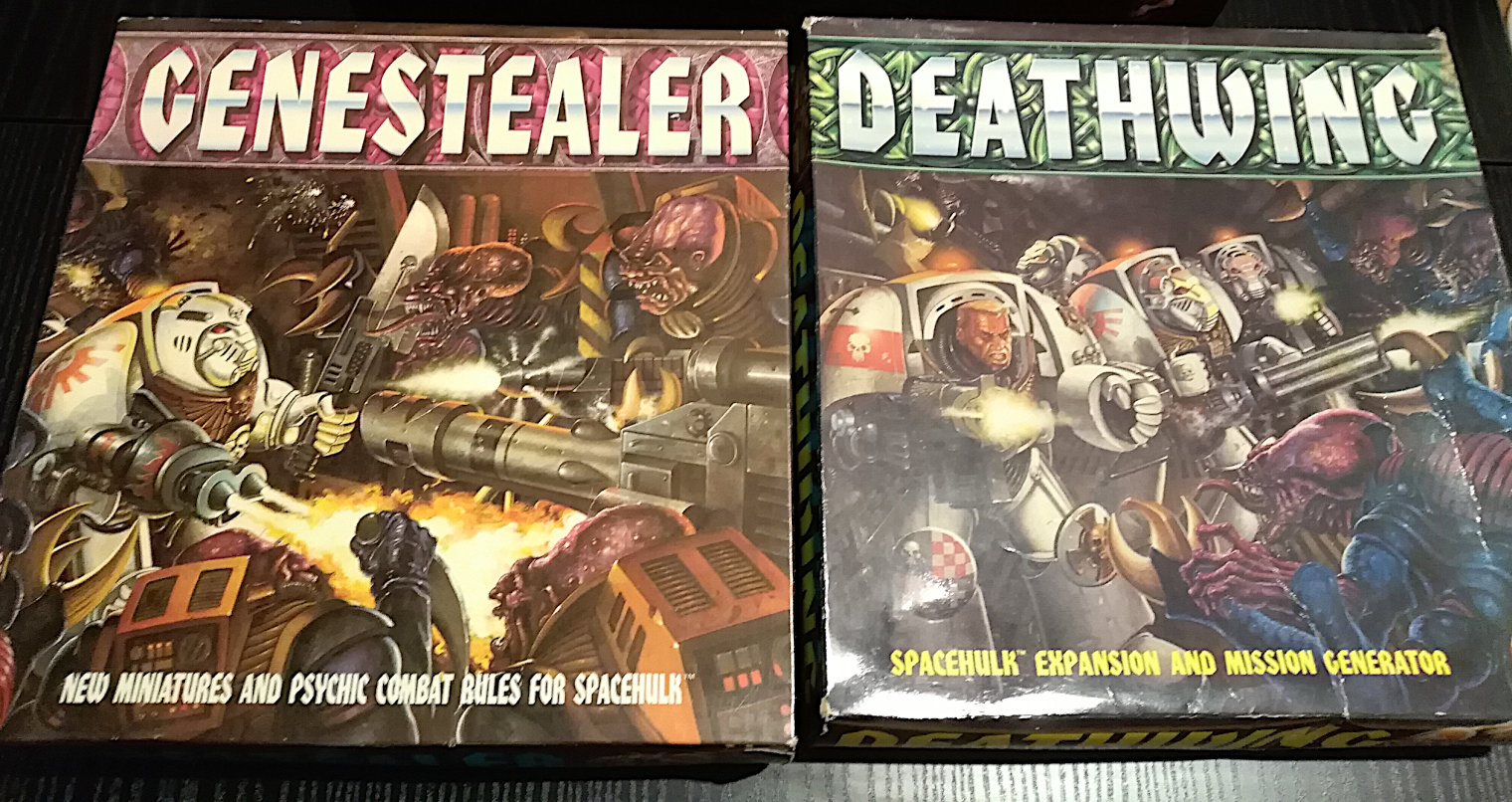 The rules for this board game are actually quite simple when compared to a lot of other board games. Most people will only need a few minutes to get an understanding of the basic rules, and that is all that's required to get started. There is a mission book that comes along with the game, which details several mission setups for the board. Each mission usually has a unique objective for each side to complete. There is also a full backstory for each mission, along with some backstory for the setting. Overall, the game package offers a lot of content. This was further expanded by two expansions which included more weapons, troop types and missions.

Space Marines and Genestealers play very differently. The Space Marine player has a very limited number of troops, usually 5 or 10 Space Marines, and as such will want to maintain distance to the enemy. Each loss is significant and will require your strategy to be revised. A single loss can mean that a corridor can no longer be kept safe, and you need to rearrange your troops. On the other hand, the Genestealer player usually receives reinforcements each turn. Genestealers need to get close to attack, so the strategy will usually involve ambushes or simply overwhelming the enemy player with your superior numbers.

Space Hulk was re-released multiple times. In 1996 came the second edition, which simplified the rules a bit. 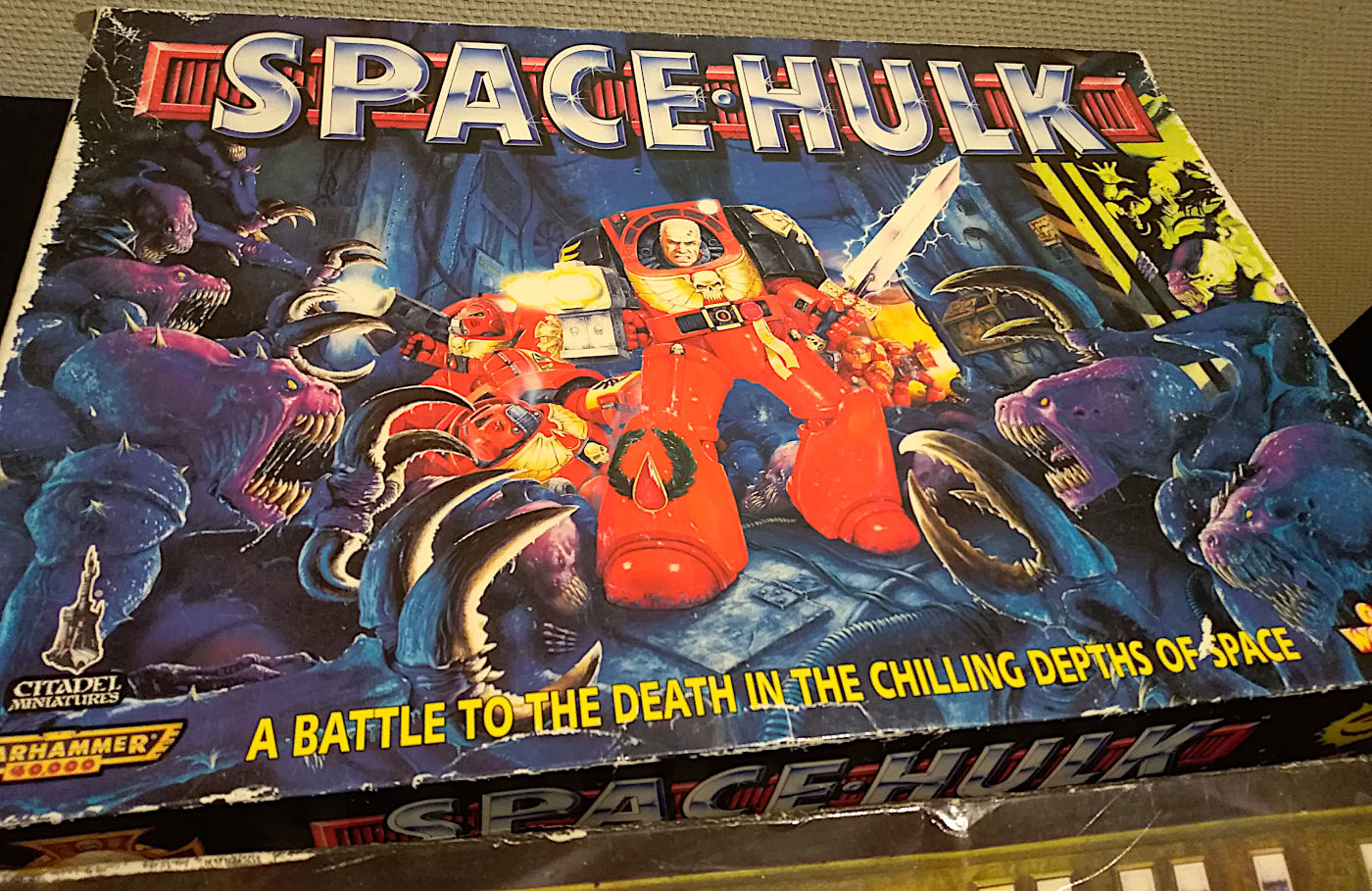 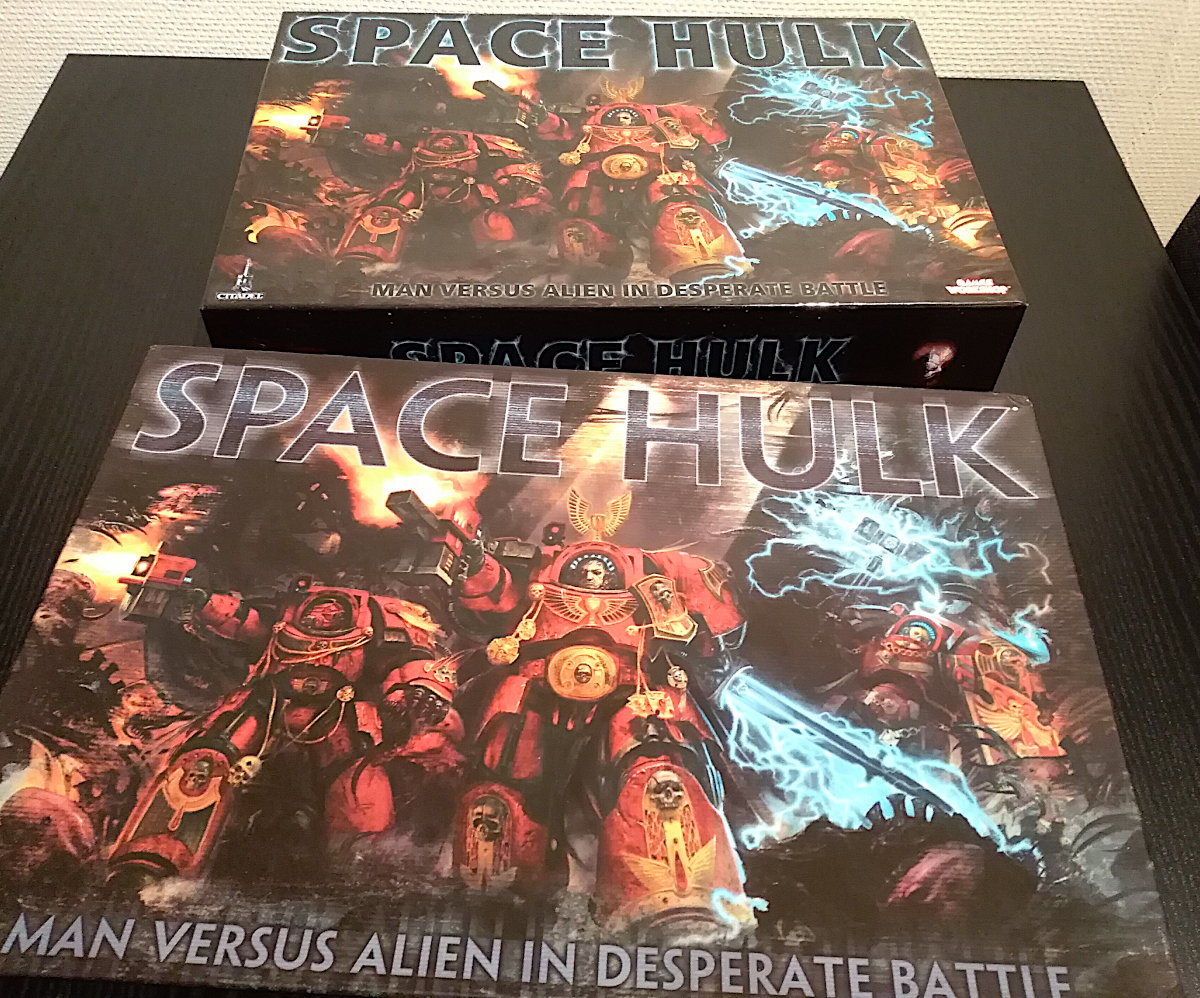 If you search a bit online, you are likely to find unofficial missions or tools to help you create your own missions. Some people have created additional unofficial rules for including different troop types as well. Still, the base game itself is more than likely to keep most people entertained for a long time. 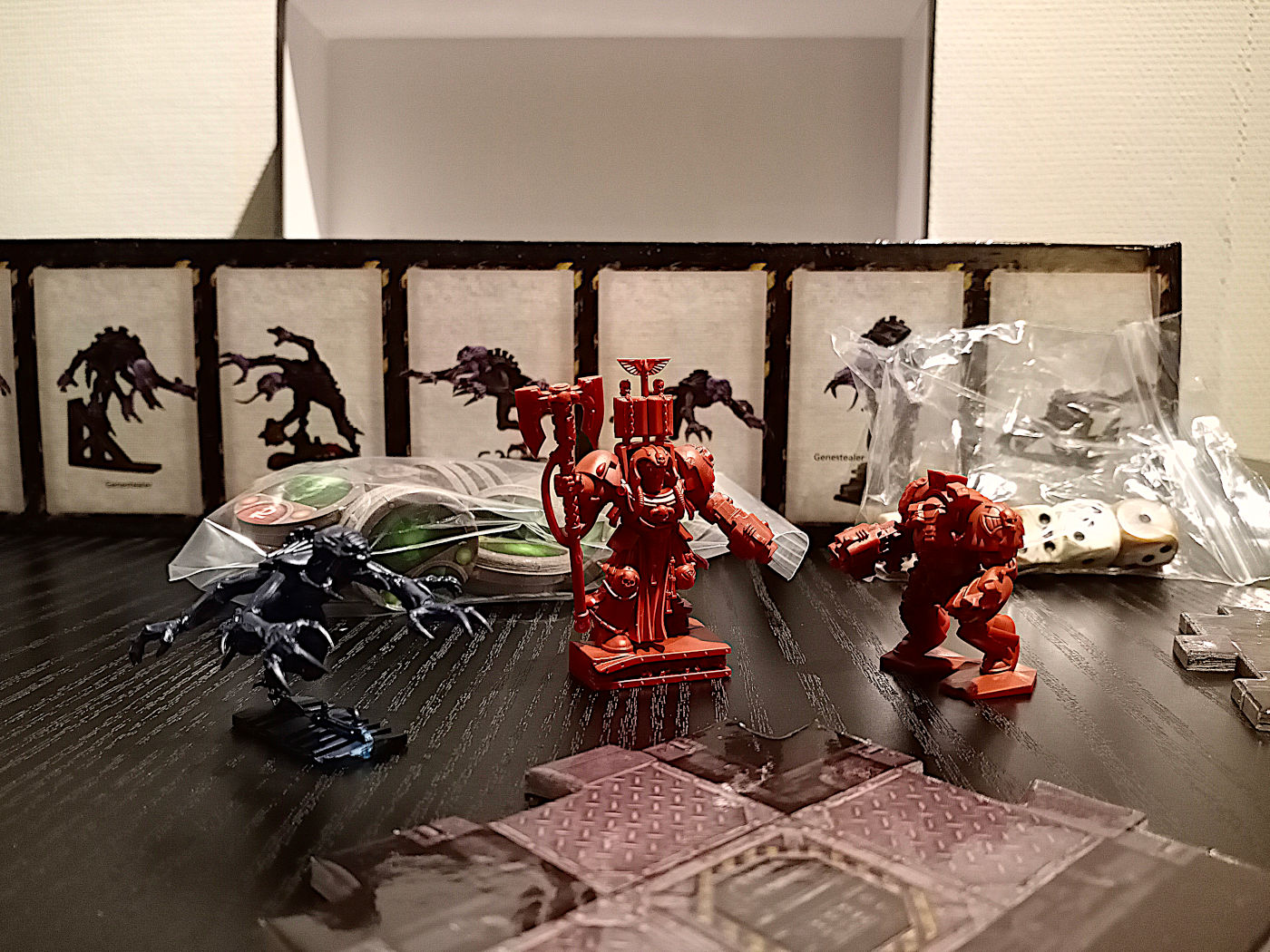 Personally, I consider this to be my favorite board game. I never actually played the first edition, I was a little bit too young when it was released. However, I bought the second release from a hobby store in my home town while I was still in elementary school. I was also quick enough to secure myself both the third and fourth editions when they were released. Whenever I play the game these days, I always pick the fourth edition. Mostly because I really like the new models, they look awesome. The third and fourth edition have the same models, but the fourth edition have a few additional missions included.

There have been numerous computer game adaptions over the years. I have an almost unhealthy obsession with this board game so I have owned and played most of these computer games. Some of those games I want to give a more detailed look in their own articles, but for now I shall give a brief description of some of these games. 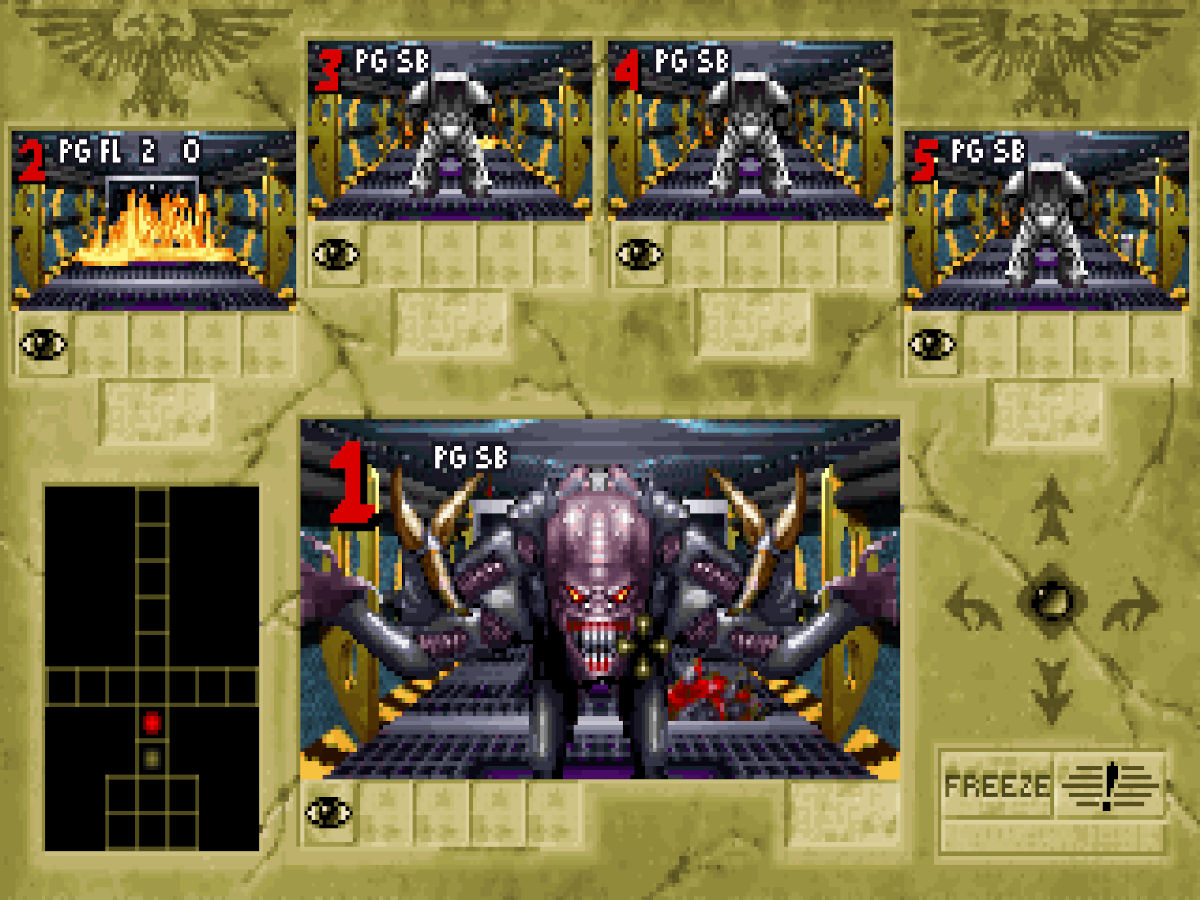 This is a real-time game with tactical elements. You can control the space marines individually, or use a tactical map to give each space marine orders. The tactical map pauses the game, but only for a limited amount of time, which gives the player a sense of urgency. This is a very difficult game by modern standards, usually requiring a lot of retries to complete a single mission. But despite the age of this game and difficulty, it has a unique charm to it and I will never forget playing this in the early 90's. I do still try this game now and then, but I have to admit that I never fully completed the game.

The general gameplay is similar to the previous game, but also feels like a first-person-shooter in some regard. You can play through individual missions, or a long campaign where you are a single character. You begin as a normal marine, taking orders through missions until eventually you are promoted to a sergeant and must take charge of missions, issuing orders to other space marines through a tactical map. The difficulty is not as high as the previous game, and it has vastly improved graphics. 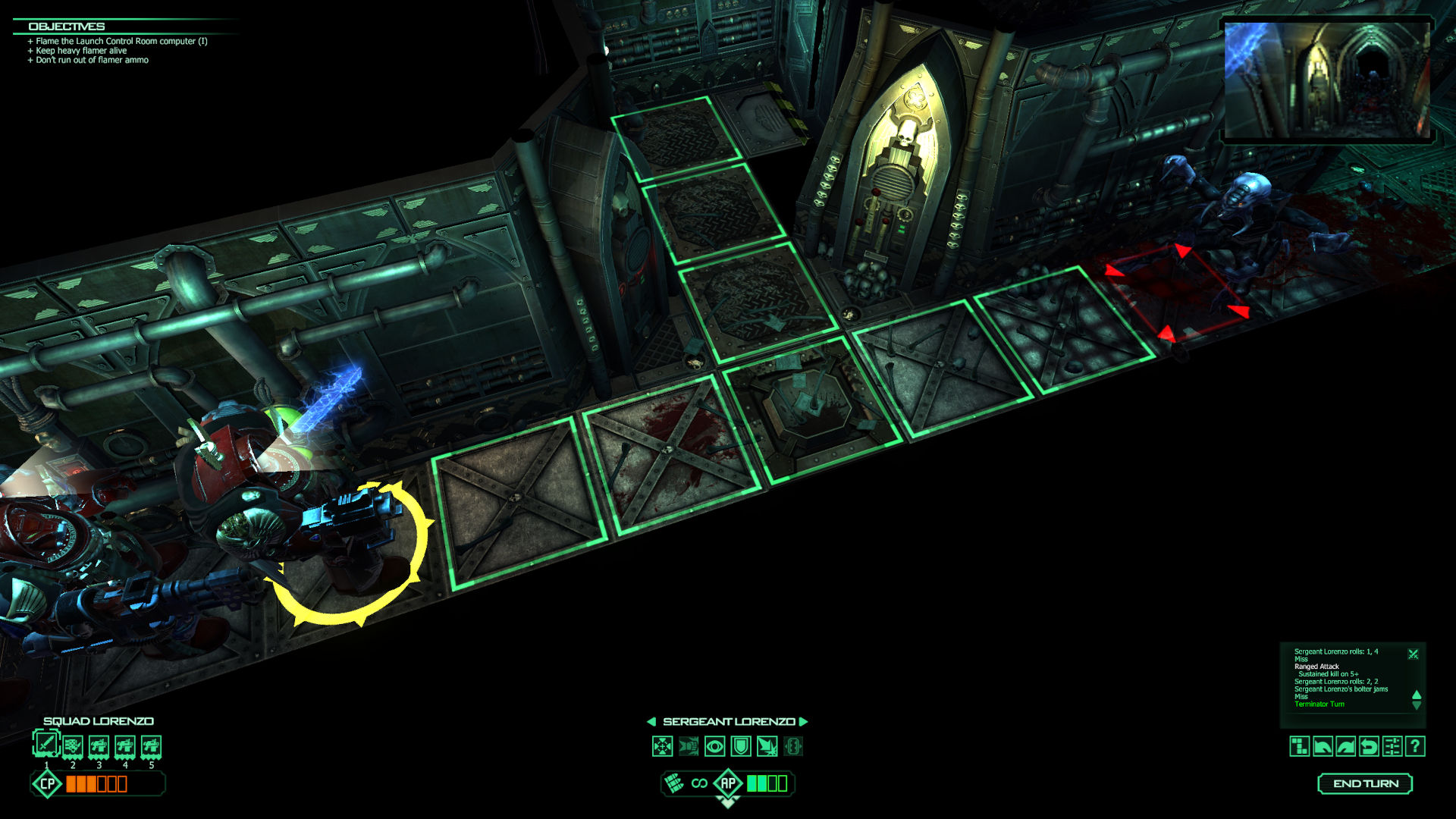 This game plays pretty much exactly like the third edition of the board game. The rules are followed pretty much to the letter, making this an ideal solo alternative to the board game. You play as the Blood Angels Space Marines, but there was a DLC that also enabled the Space Wolves, which were slightly better at close combat, but also slightly worse at ranged combat. Because of the strict adherence to the board game rules, I found this game to be just what I wanted.

Made by the same developer that made the 2013 Space Hulk game, this was created to be more of a computer game instead of a board game adaptation. It is still turn-based like the board game, but your combat effectiveness is more related to the skills of your marines than simple randomness. Multiple Space Marine chapters are available, each with unique bonuses and penalties. Your Space Marines will gain experience through missions, eventually gaining enough experience to increase to the next level. Each Space Marine has statistics and skills that you can improve and customize as they gain levels, along with their visual look and what weapon loadout you want them to have. I consider this to be the best Space Hulk computer game.

This game take a new approach to Space Hulk, taking away with the tactical squad management and instead giving you a first-person-shooter experience. This game is probably a lot more accessible than the previous titles. I have to admit that at times it can be pretty impressive visually, when you are standing inside a giant cathedral-like chamber with the distinct Warhammer 40.000 style.

Tactics is unique in that you not only play as the Space Marines, you can also play as the Genestealers. Both have their own narrative-driven campaigns. You can customize your squads, both visually and with equipment. The game manages to be faithful to the board game, while still adding new and interesting features. Considering that some of the older games can be very difficult to get a hold of, this game is a good choice if you want a tactical turn-based Space Hulk experience.

The board game experience can never be replicated in computer games, there is just something unique about using actual models on a board with dice. However, most of the computer games are doing an excellent job of capturing the atmosphere of Space Hulk.

Since this website is primarily focused on digital games, I don't intend to dive deeper into the board game unless it is requested. But do expect articles on at least a couple of the computer games.