Firefly Studios released their first game in 2001. The game was received favorably by both critics and players, and was a commercial success. A lot of people still hold this game in high regard, and it launched a franchise. We are talking about Stronghold. A game where you have to manage the economic aspects of running a medieval castle, while also fending off attacks by building defensive walls and towers. This ended up evolving into a series of games, with varying levels of success. Personally, I find most entries in the series highly enjoyable, each with it's own unique take on this type of gameplay. However, for this article I want to have a closer look at one of the more unique entries in the series. But first, a quick overview of the gameplay that makes these games so compelling.

What sets the Stronghold series apart from most other games where you wage medieval warfare, is the level of detail in which you manage your medieval castle. In the Stronghold series you need to ensure that your peasants are happy, well fed, and safe. If your population is not happy, they will simply leave your castle. Without any peasants, you can't get any work done. After all, nobles and knights should not get their hands dirty with menial labor. So keep your peasants happy by giving them generous food rations, distributing ale, or holding religious mass in church. So long as you got this covered, you can exploit your population with cruel taxes and long work hours. With the right industry you can have weapons production, train troops and build a strong castle.

So what makes Stronghold Legends so different from the other releases in the series? Dragons! And a few other details.

All the other games only include realistic troops. You can make archers, crossbowmen, spearmen, sworsdmen, and so on. While in Stronghold Legends, you can also create mythical creatures. SHL also has three different factions. Each faction is able to build all the regular military troops, but they each have a unique structure for creating their own unique troops. There are also a few variations in what economic buildings are available to the factions. Let's have a brief little look at some of the differences. 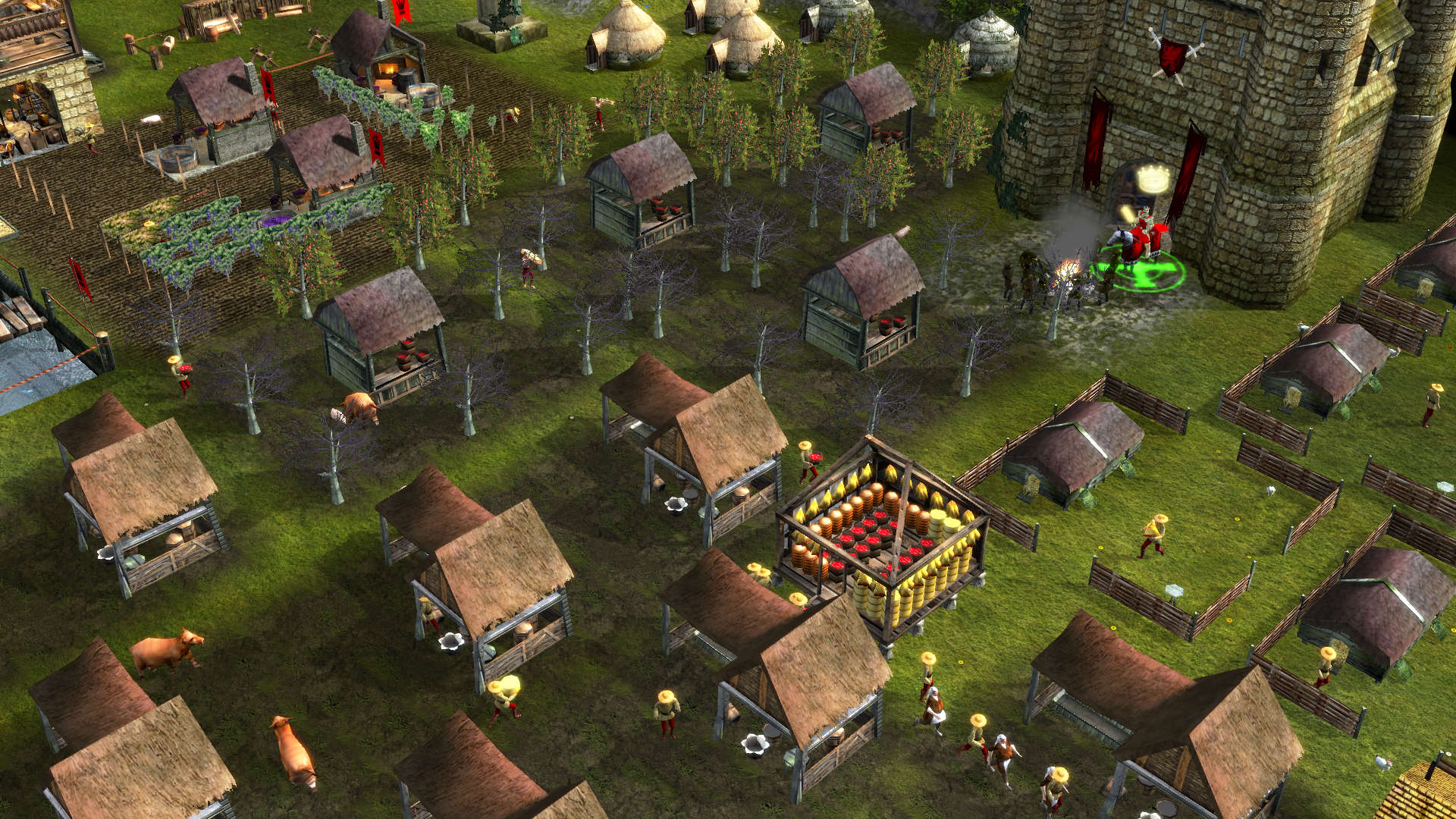 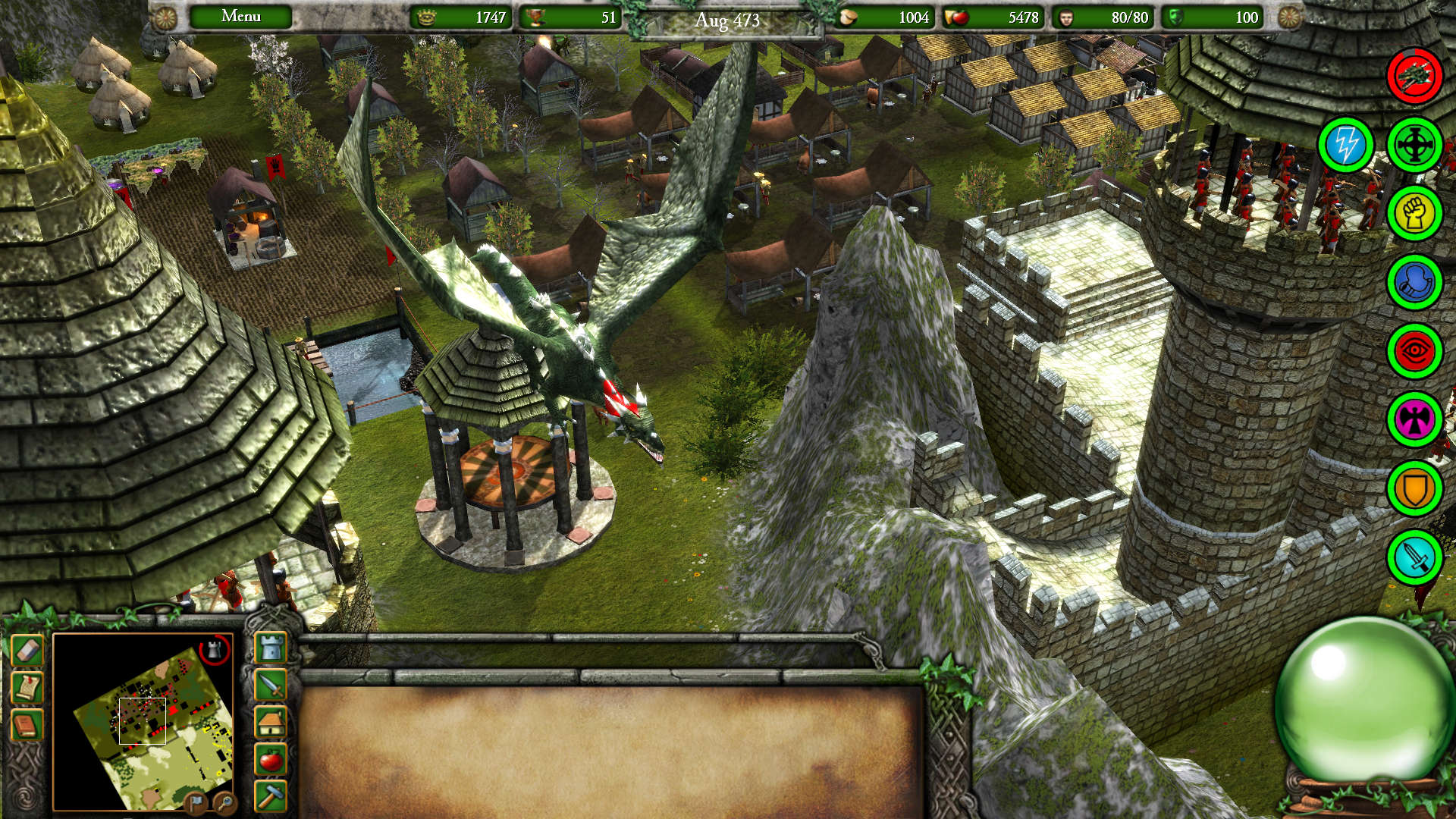 King Arthur (Good), plays very much like a traditional Stronghold game. This faction has access to all economic buildings, and is the only faction that can build trebuchets. The unique building for this faction lets you build the knights of the round table, as well as Merlin. Each knight has a special power, such as healing your troops, breaking down enemy walls, protection from arrows. If you've played other Stronghold games, this is the faction that will feel the most familiar. 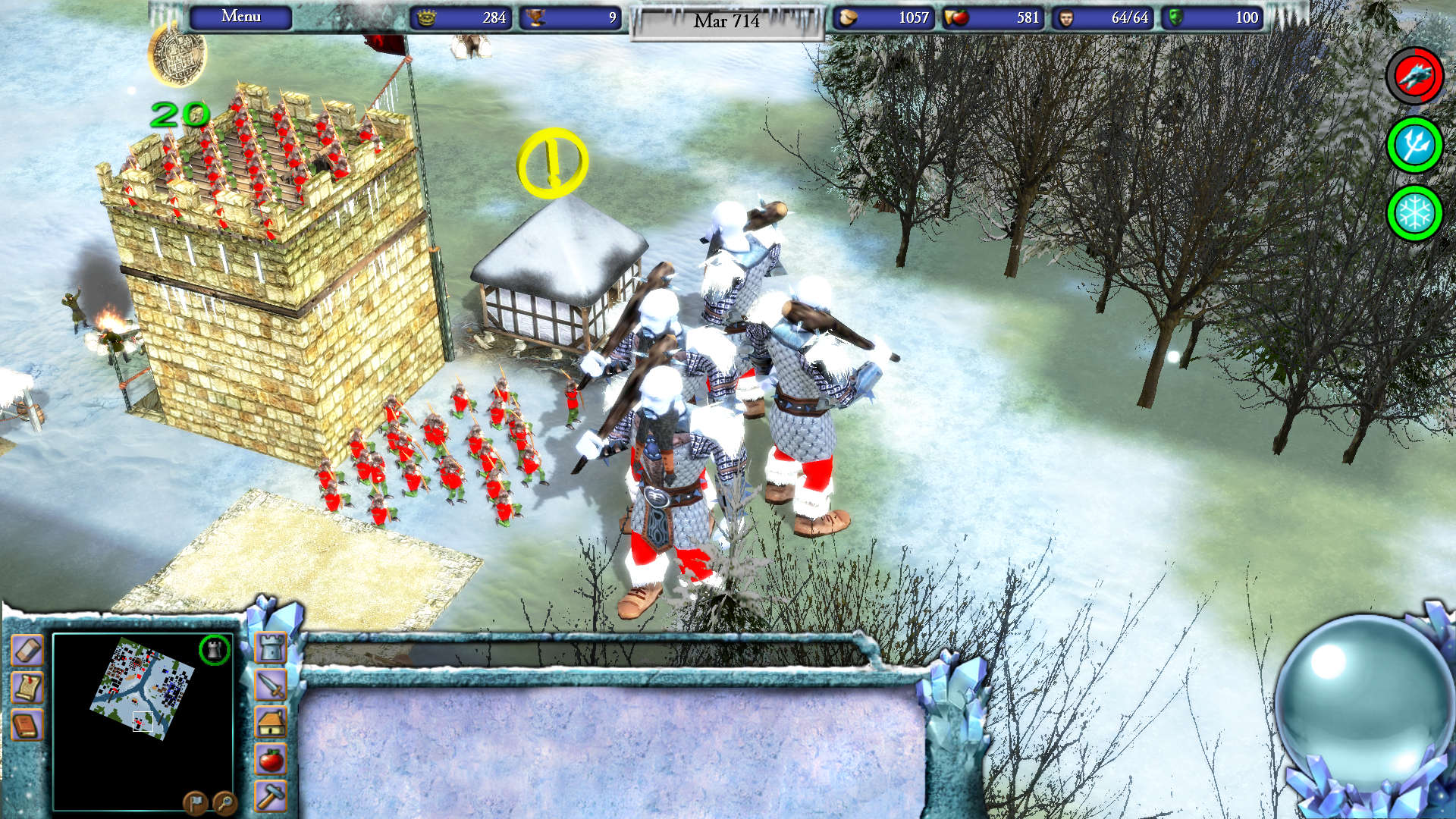 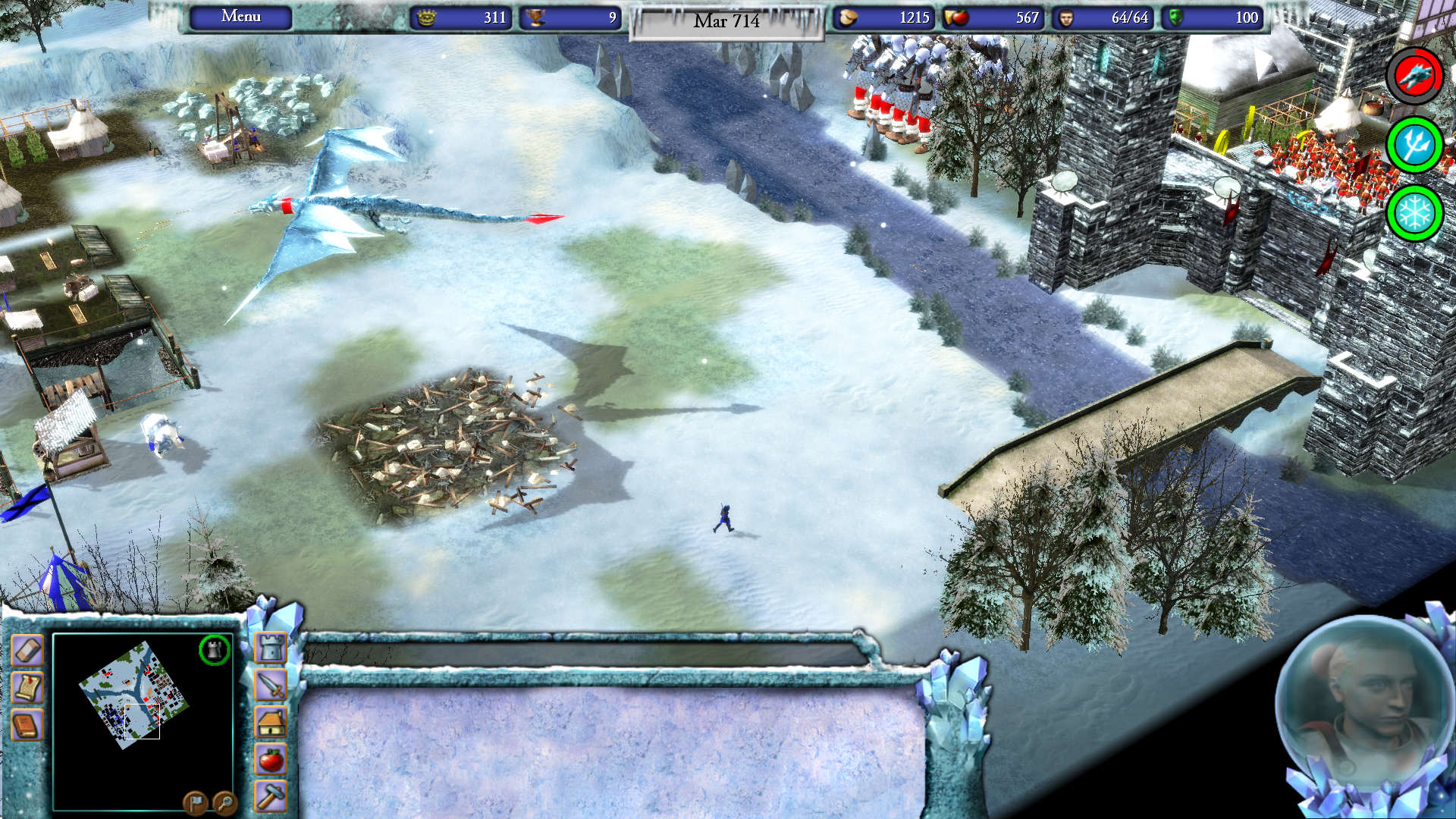 Next is the Ice faction. Your lands are in constant winter, and all buildings reflect this as well. Certain economic buildings are not available, such as wheat farm and bakery. Vineyard is also not available for the Lord's kitchen, but otherwise all other buildings are available. The unique building for Ice provides a selection of unique creatures. Among these are wolves, shield maidens, polar bears, and the awesome frost giants. There is also a unique unit, the Ice Queen. 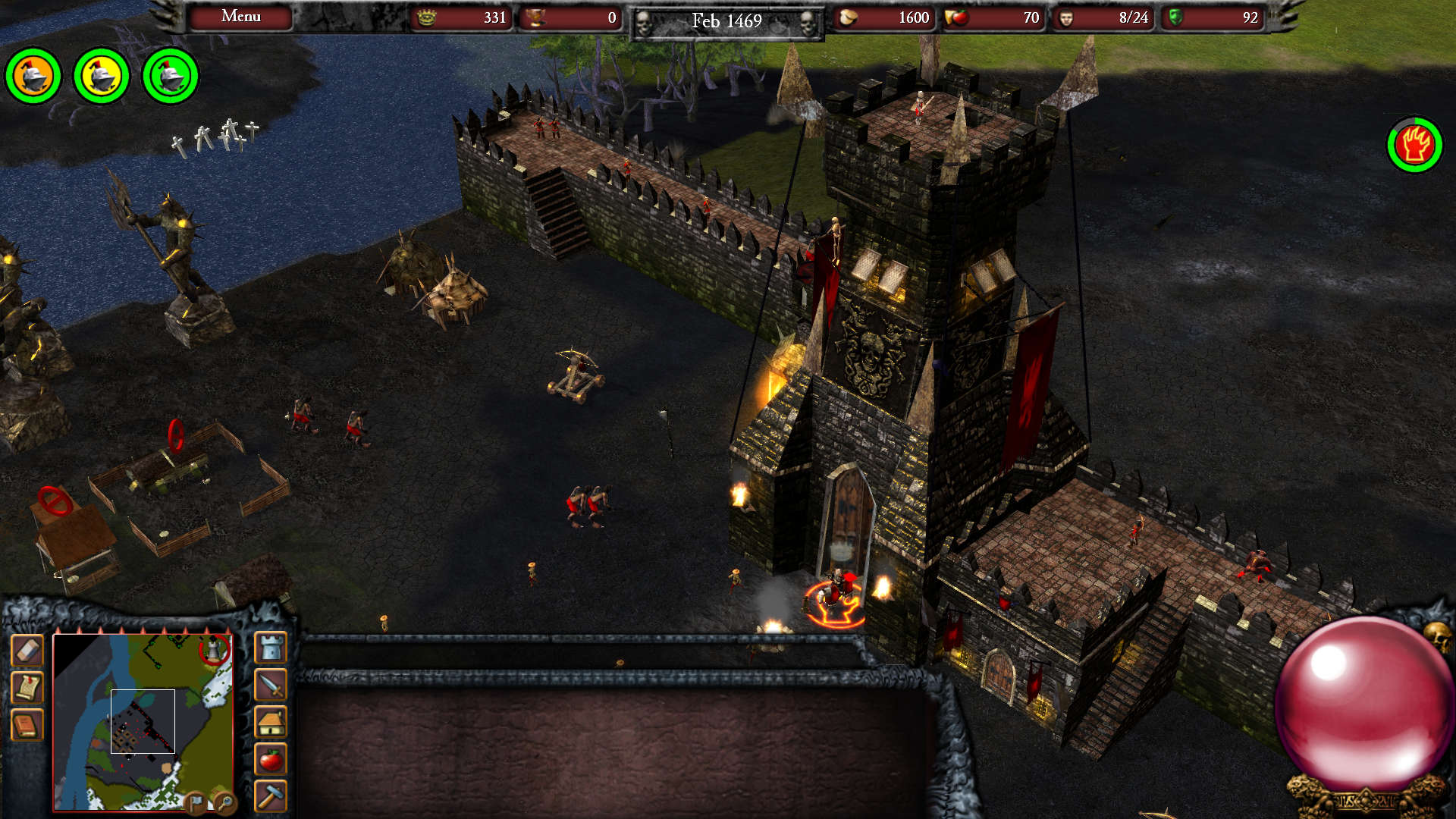 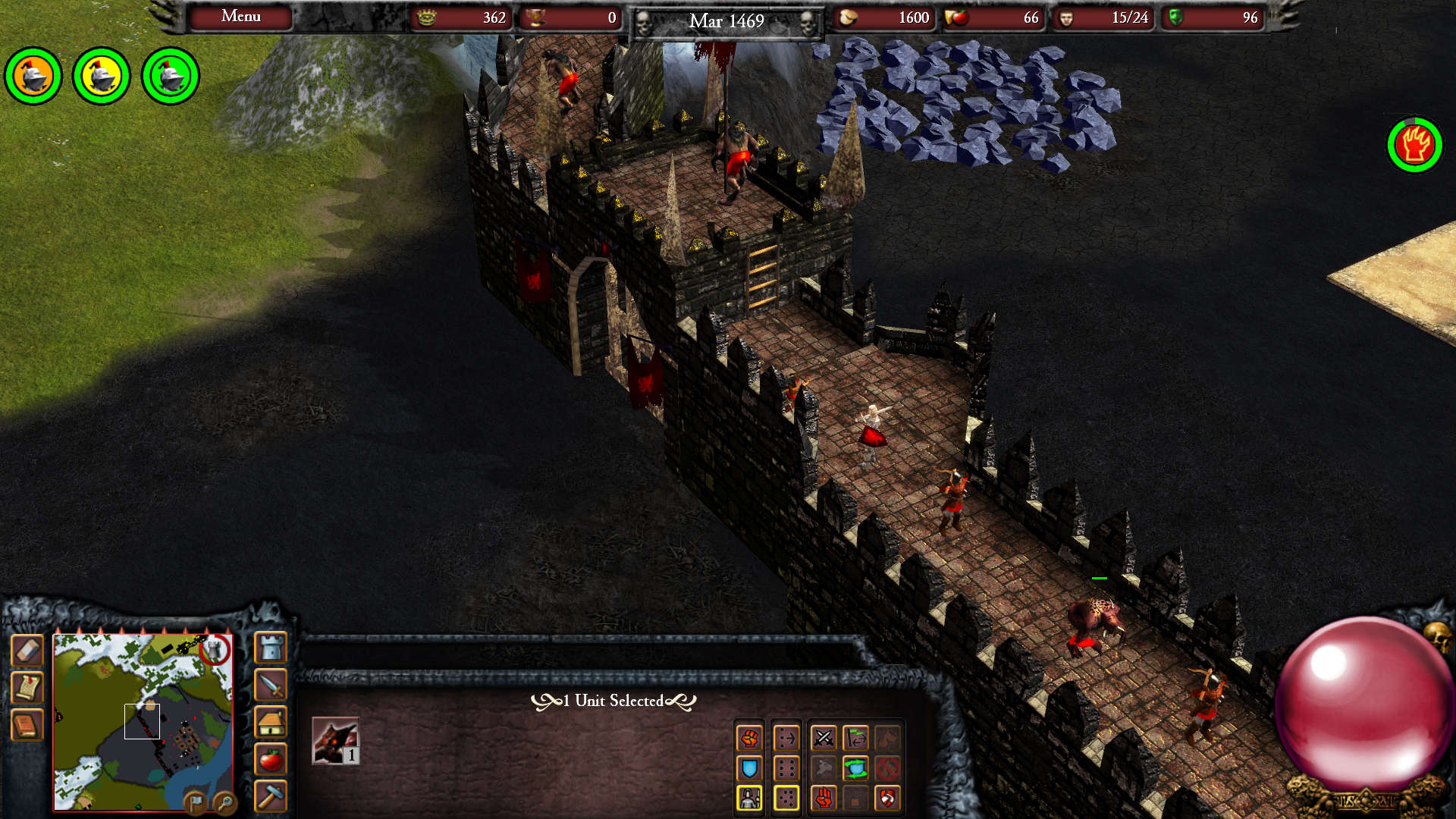 Lastly we have Vlad, or the Evil faction. They make their home on a hellish landscape consisting of dark, cracked ground and dead trees. This faction is also missing wheat farms and bakeries, so like the Ice faction it can't rely on bread to feed peasants. The most noticeable difference is the fact that this faction can't build a church. However, it does have some very interesting units available. Perhaps one of the most interesting units available is the Vampiric Creeper, which is very strong against archer fire, and can convert weak enemy units if it can get close enough. It also has the ability to climb castle walls. This means that an enemy that only have archers, crossbowmen and men-at-arms, can easily be defeated by converting the units. Then we have the Werewolf, which provides a unique strategy when combined with the Werewolf Launcher. Catapult your werewolves over the enemies castle wall, and watch them wreak havoc inside the walls of the enemy. The evil Sorcerer is also worth mentioning, with his Meteor Storm power, which can take out large groups at once.

There is a campaign for each of the factions, which is suitable to learn to play with each individually. After completing the campaigns there are the skirmish trails, which start easy, but each map is increasingly challenging. In my opinion, the Trails are what this game is really about. This is where you truly get to test your skill. If you prefer a slower playstyle, then the Freebuild mode should suit you fine. It will let you build without any obstacles or worries.

This game was originally released in 2006. Personally I bought it on release and never really stopped playing it. There was a recent Steam Edition update, on Steam of course, which re-enabled the multiplayer. The update also included an additional trail, which was originally only available to owners of a certain special edition. If you still don't think there is enough maps, there are maps available online, and you could always make use of the included map editor to create your own scenarios.

In short, SHL is a very interesting game that can keep you entertained for countless hours. Even just playing the skirmish trail is extremely rewarding as each map will require a unique strategy to win. Learning how to build an efficient castle is, in itself, one of the gameplay challenges to overcome. This alone is a very rewarding process. The game is also easy to get into for a new player as the tutorial is very well made. The difficulty of the game progresses steadily, but not too fast, so anyone should be able to follow along while learning the game better through the campaigns.

This game gets a strong stamp of approval from me, and is one of the more interesting titles on the Stronghold series.