War for the Overworld

Back in the late 90's, we were blessed with a most unusual and awesome game. It was called Dungeon Keeper. It was a game where you were the evil mastermind that constructed dungeons filled with traps and evil creatures, and lured the goodly heroes to their doom. I have no idea how many hours I put into this game. Then came a sequel, Dungeon Keeper 2, with 3D graphics and a vastly refined gameplay. There were hints of a Dungeon Keeper 3, but it never came. There have been a few attempts by other developers to recreate the the glory of the old Dungeon Keeper, but in my opinion none of them managed to deliver the authentic Dungeon Keeper experience. 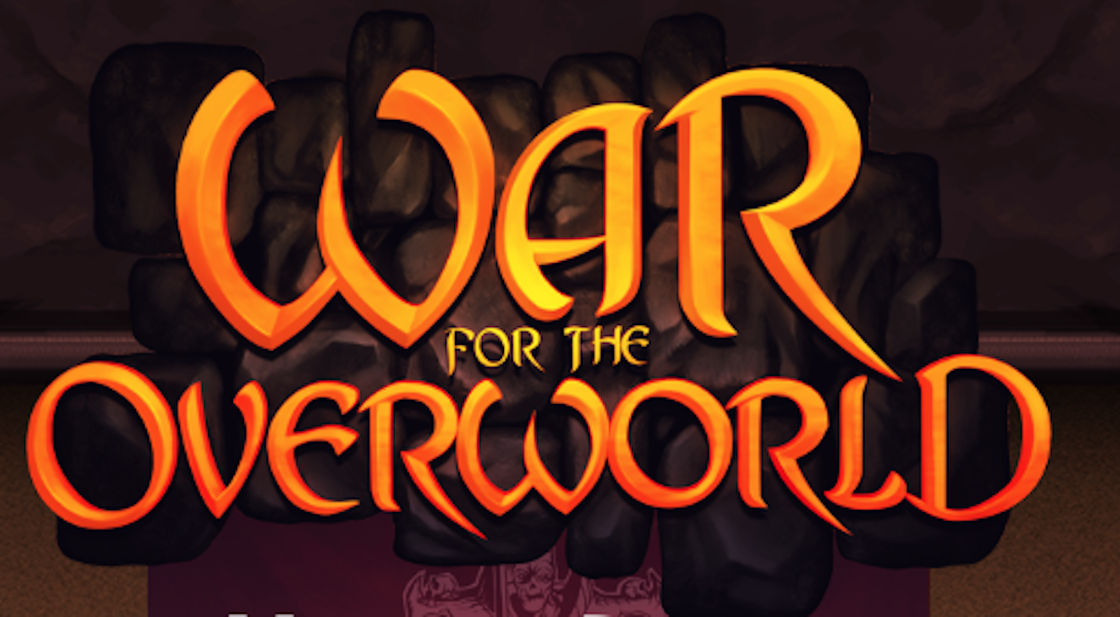 This all changed with War for the Overworld. It was funded on Kickstarter and released in 2015. The original release suffered some issues, but the developers have remained true to their product and continually patched the game over the years. It has also received several DLC's, all with good content that are actually worth the money. The game even has a native Linux version, something that I will loudly praise. This game is everything I could have wanted in the scrapped sequel to Dungeon Keeper 2. They even got Richard Ridings, the voice actor for the narrator of the old Dungeon Keeper games, to once again be the narrator. 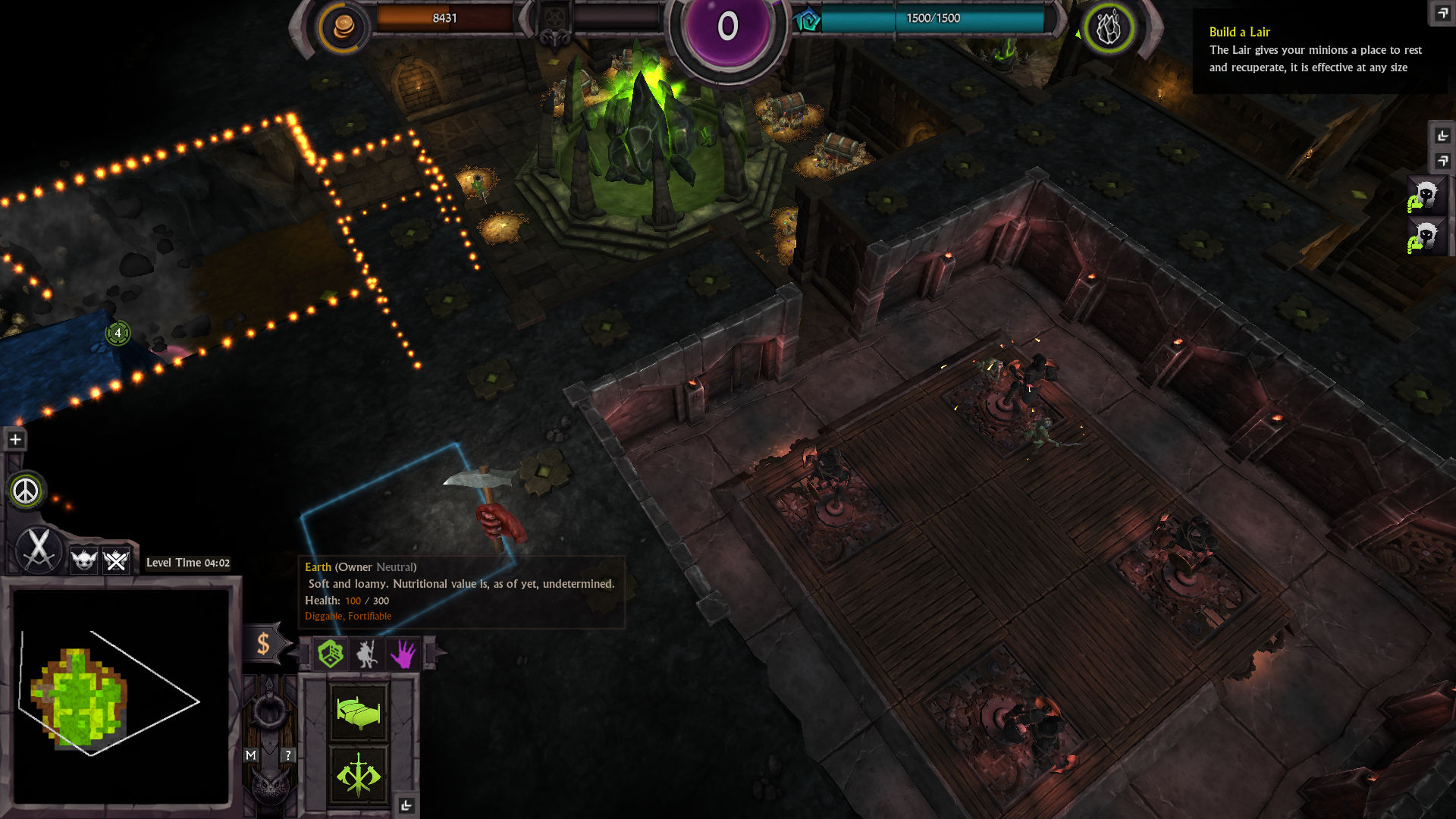 In WFTO you take on the role of an Underlord, an evil entity with the power to summon magical workers that will carve out your underground dungeon. You can mine gold, construct rooms and attract creatures to your dungeon. Every creature has basic needs that must be met, a place to sleep and a place to eat. Beyond that, they require pay in the form of gold, and most creatures will only come to your dungeon if you have constructed a room where they can perform their preferred job. Among the different rooms available, you have the Archive where Cultists will research sins, the Foundry which will attract Chunders that can construct doors and traps, and the lovely Torture Chamber where the Succubus will convert enemy creatures to your side. There are obviously a lot more rooms with many interesting features, and your unique playstyle will influence which rooms you want to prioritize over others. 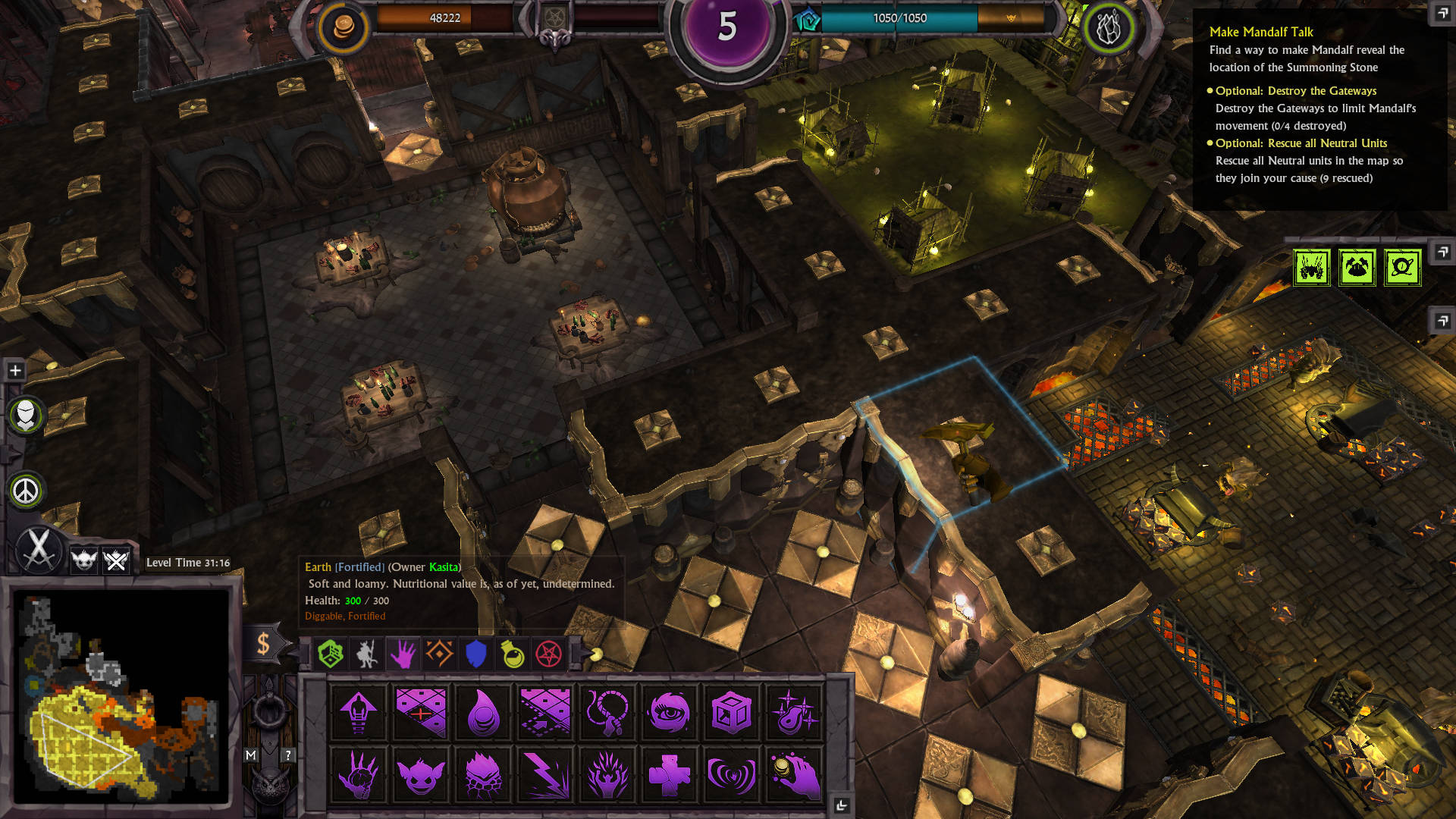 Your Dungeon has a Dungeon Core, this is your link to the physical world. If the Dungeon Core suffers sufficient damage you will be banished from the realm, effectively losing the game. So while you are managing your dungeon, it is very important that you keep in mind the security of your Core. Placing traps is a very good strategy for Core defense. Traps are rarely strong enough to stop attacks on their own, but they will slow down the enemy and give you the time you need to muster your forces. 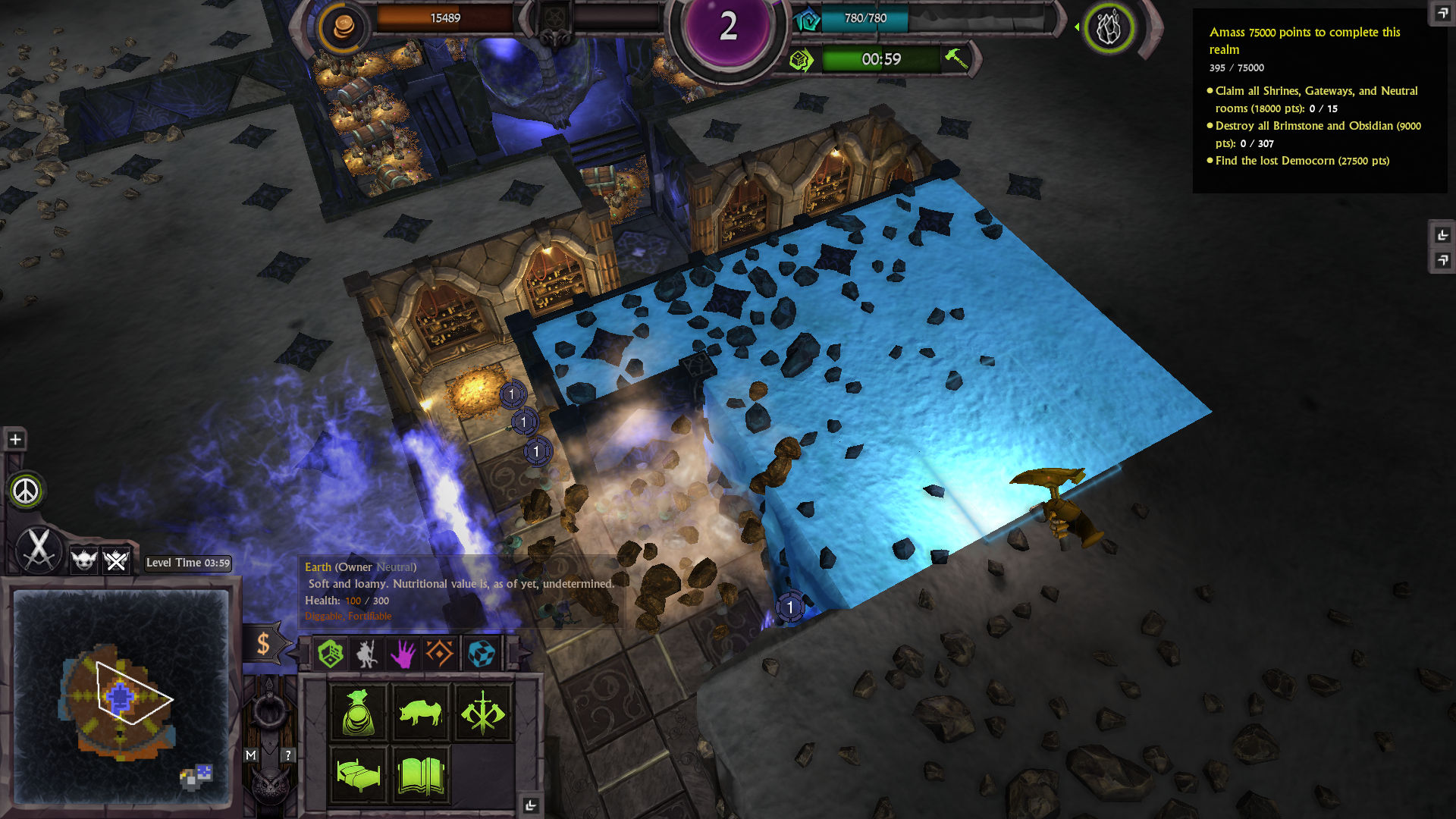 You do not directly control any of your creatures. You can pick up your creatures if they are on land owned by you, and you can drop them down again on your own land. Apart from this, your creatures will go about their business as they wish. You can command them to focus on one job by dropping them in a particular room. If you drop creatures in the Barracks for example, it will focus on training there over other jobs. Your creatures will still require to sleep and eat regularly, which will take them away from work. Your workers, however, are magical. They don't need food or sleep, and if you have marked a tile for excavation, they will do their best to carry out your wishes. If they have nothing to excavate, they will claim land for you and reinforce your dungeon walls. One important type of structure your Workers will claim is the Gateway, which is where creatures may enter your Dungeon. If you fail to cater to your creatures needs, they will become unhappy and work less, and might even leave your dungeon. 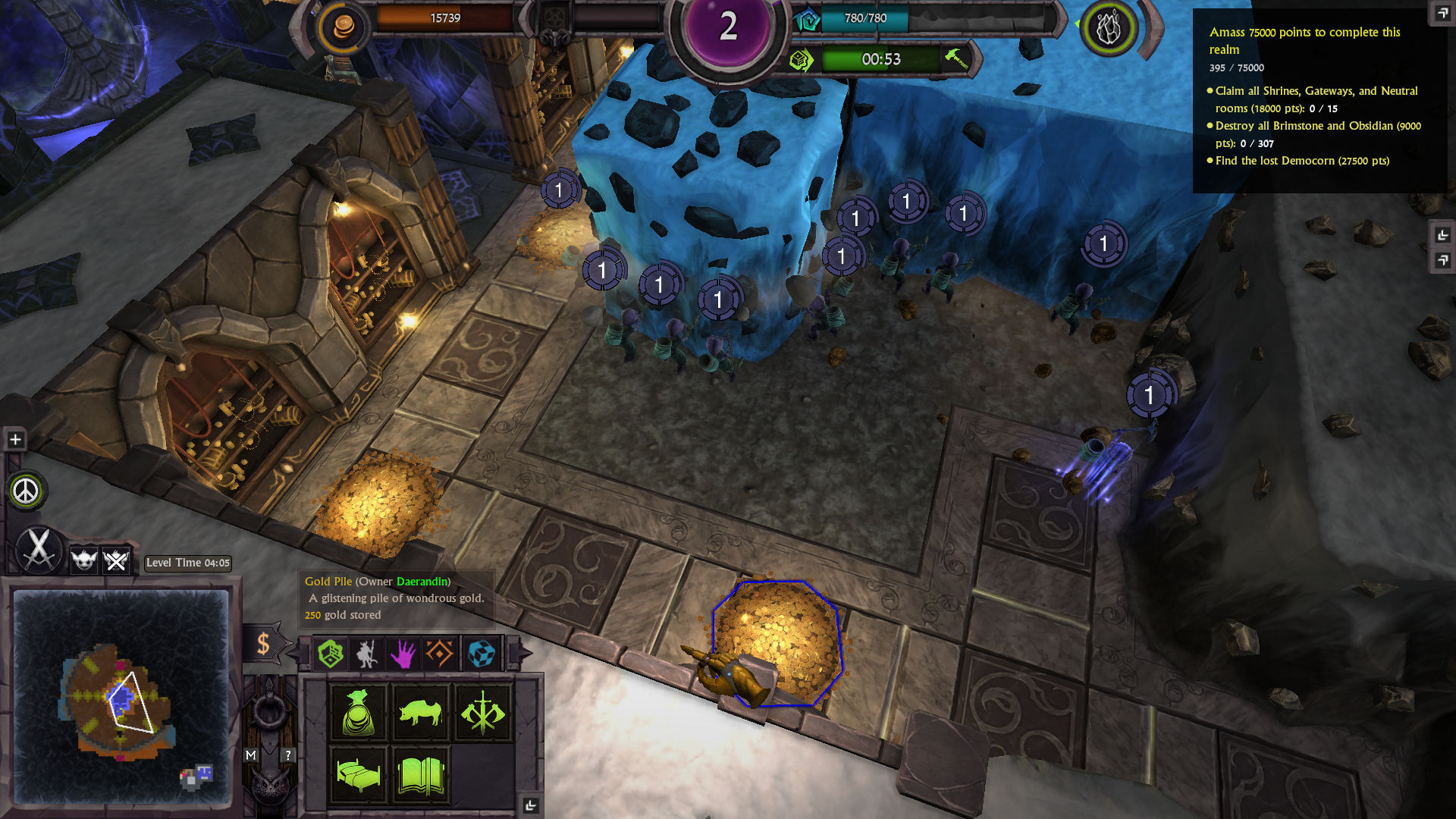 If you are familiar with the old Dungeon Keeper games, then this should all sound familiar. However, there is one new type of creature, the Beasts. Beasts do not enter your Dungeon from a Gateway, instead you must build a Beast Den. This room has its own portal where Beasts will enter. These creatures are not intelligent and will not require any pay. As long as you have food for them, they will remain happy. Most of the time, they will explore randomly on their own, but if you have an Arena built, it will attract the Beastmaster to your Dungeon. The Beastmaster will gather your beasts and have them fight in the Arena. Your beasts will gain experience from fighting in the arena, making them considerably tougher in combat against your enemies. 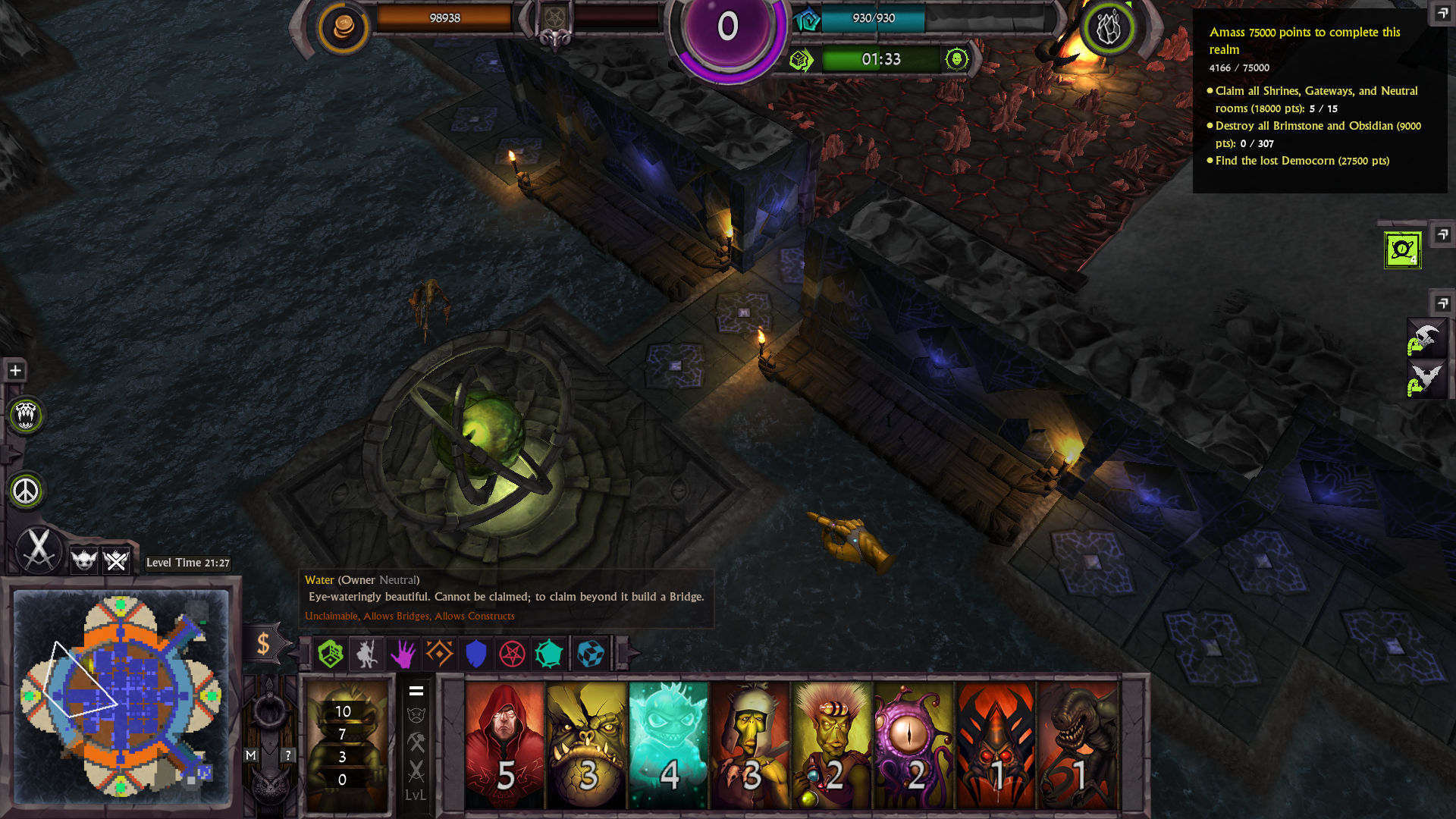 Beasts are a very useful addition to your army since they don't require any pay. You can quickly field an army of beasts to attack the enemy early. The only downside to beasts is that they are generally not as strong as your intelligent creatures. An army of beasts will not be able to stand against a trained force of intelligent creatures. But they are good as an expendable force, or as support for your army. But this brings up another thing about this game, how do you direct your creatures? You can't drop your creatures on territory that you don't own, so you must use another method to send your minions into enemy dungeons. You have the Rally flag which you can put anywhere on the map. Your creatures will attempt to make their way to the Rally flag as soon as you place it. The basic Rally flag will attract all of your creatures while the Beast Rally flag will only attract Beasts and the Beastmaster. You can also create control groups, which have their own rally flag that will only attract members of the control group. Lastly, you can also create a peace corps, which will ignore any rally flags. This is useful if you want to keep some creatures working in your dungeon while waging war at the same time. 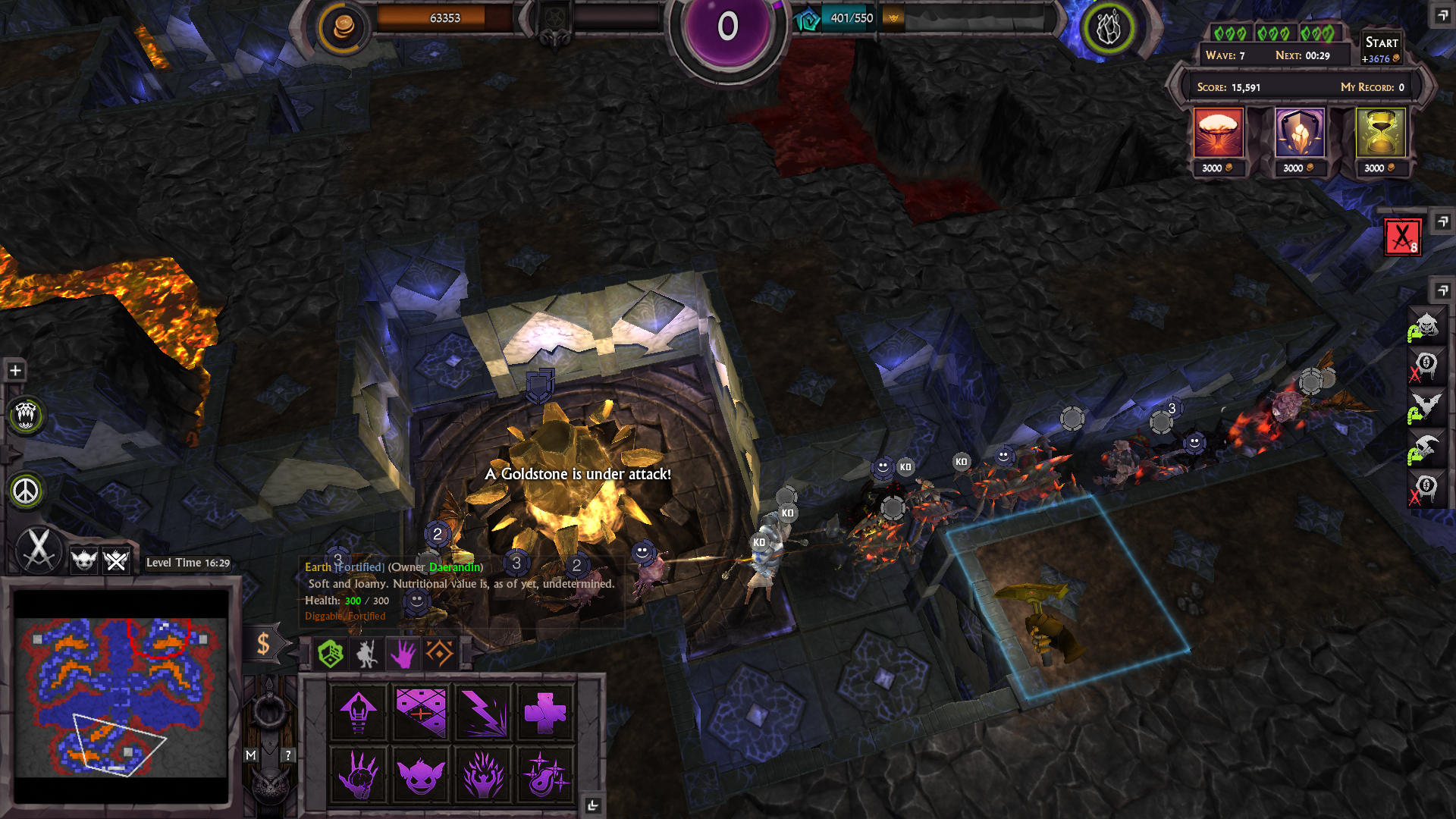 If you build a Sanctuary in your dungeon, then you can start rituals, which your cultists will channel their energies into. Rituals come in a large variety, enabling you to even convert your mana into gold if you are running low on the valuable resource. The Sanctuary is also the only place where you may summon one of the most powerful creatures you can command, the Vampire. It will require a ritual as well as sacrifice. Another useful room is the Alchemy Lab, where Crackpots will create potions for you, which also come with a large variety of effects. Both rituals and potions are important for both defense and offense, and mastering their use is very important for new Underlords. 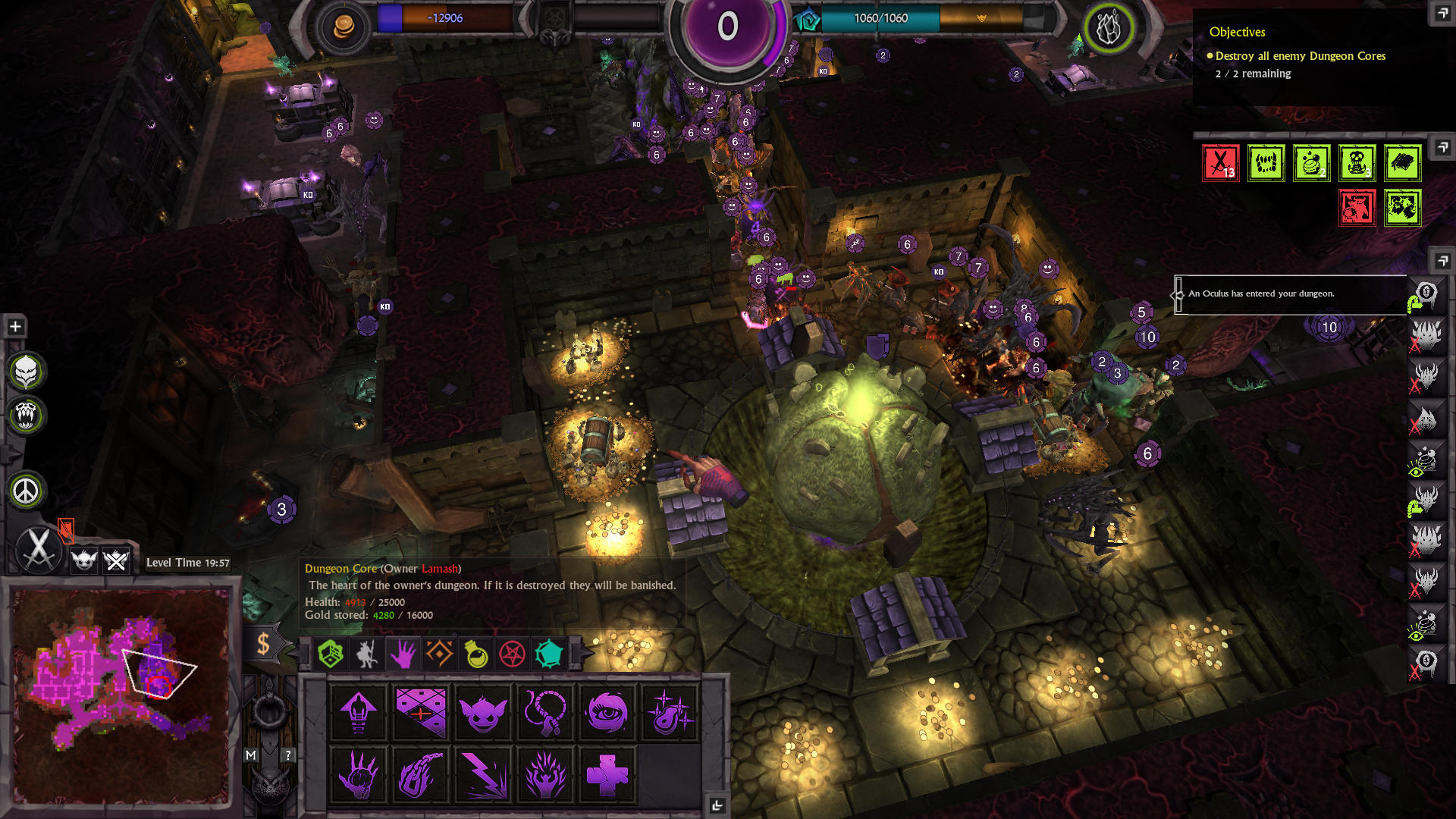 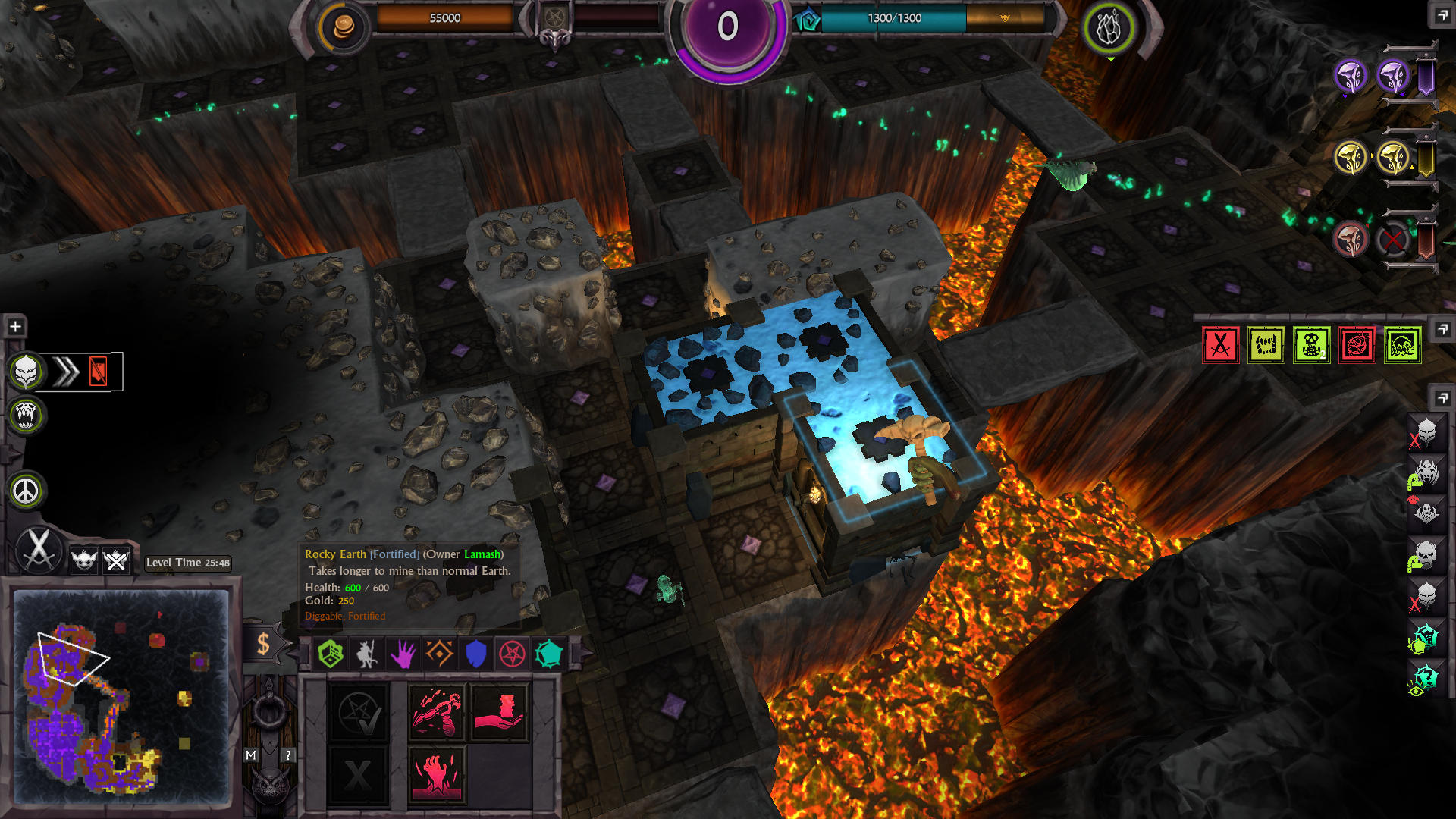 The game features a main campaign, which takes you through a storyline with more and more Dungeon rooms and features gradually unlocking through the campaign. It is a great way to learn the game, and it is also extremely fun. My only gripe is that some of the missions feels like they are forcing you to rush. I prefer to take my time with this kind of game and really plan out my masterpiece dungeon. Thankfully, only a few missions actually require you to be quick. Most missions can be played at your own pace, as long as you are ready to repel attacks as they come. I also want to point out that while the campaign was sorely lacking in cutscenes and proper context upon release, the developer has taken the time to flesh out the campaign with more cutscenes with later patches. As it is now, I consider the campaign to be a wonderful experience. For the most part you are fighting against the Heroes of the land, who come to vanquish your evil. A few campaign levels will have you facing off against other Underlords as well, forcing you to change your tactics. 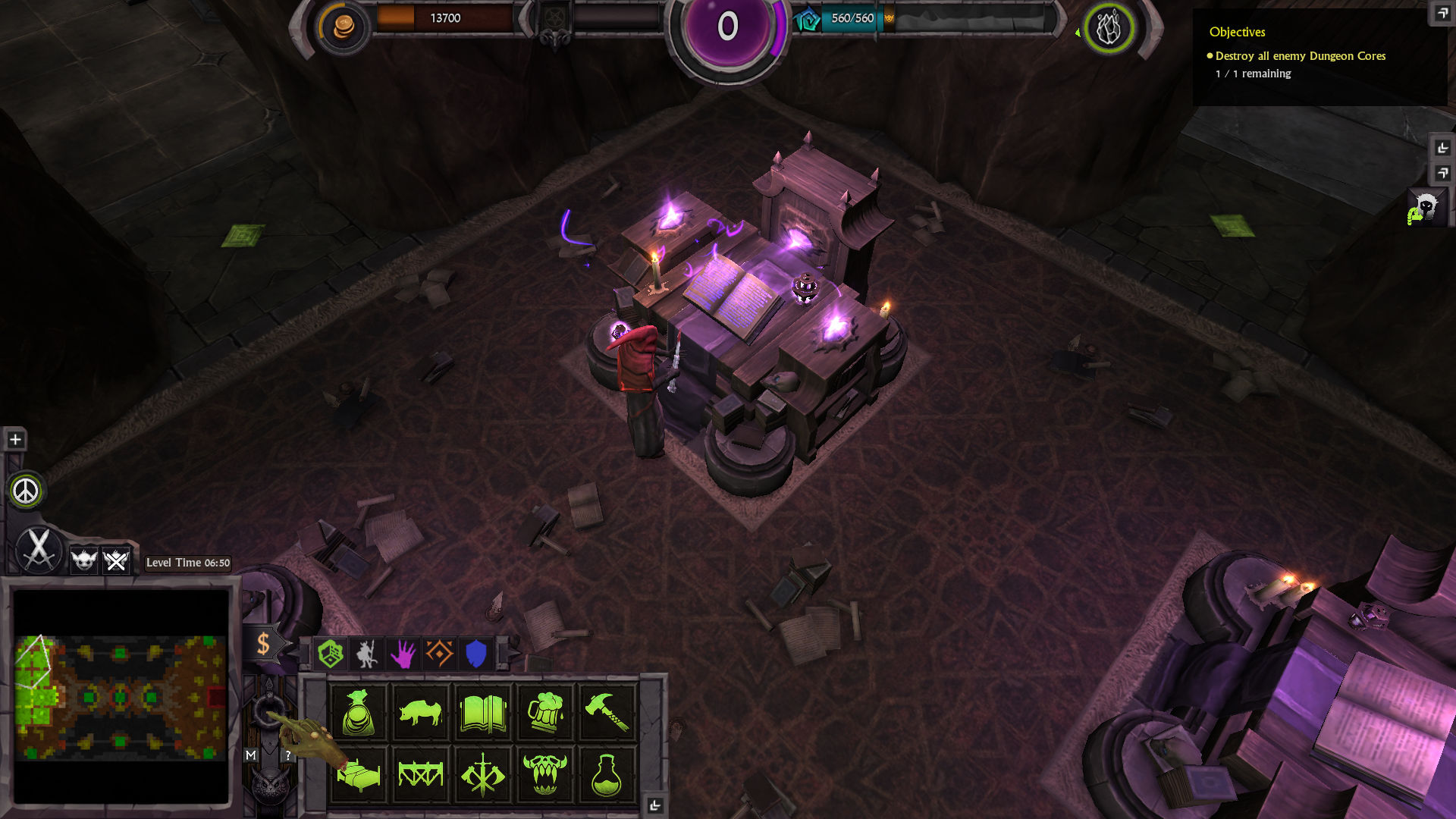 There have been additional content released for this game, adding two more campaigns. The Heart of Gold campaign is only four levels, but each level takes a long time to complete and they encourage you to really take your time. I personally love this campaign. Then there is the Undergames, which pits you against other Underlords. For this campaign you get to pick which Underlord you wish to control, each with unique playstyles. It's a very interesting experience, and something I wish they had expanded upon more. 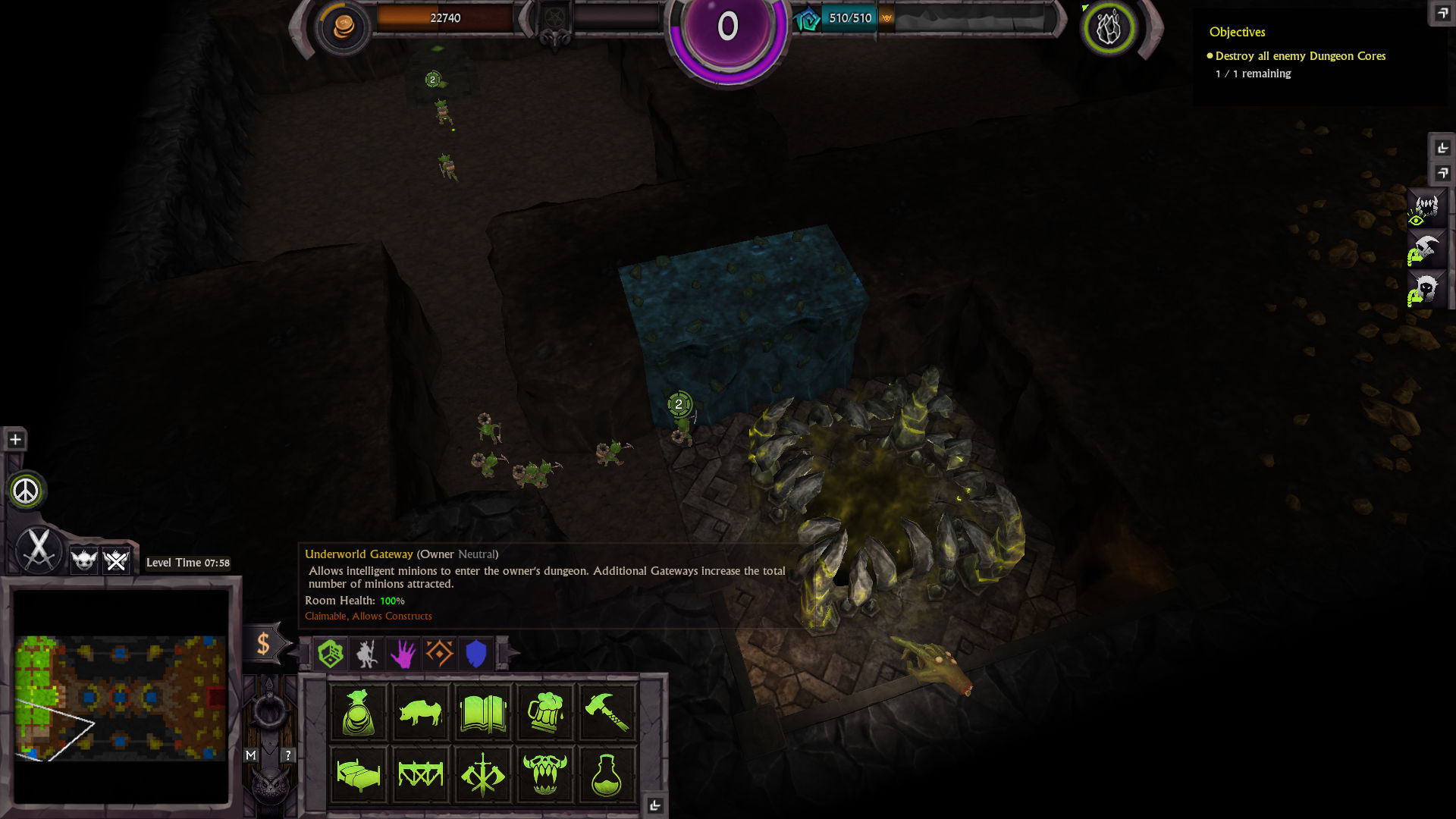 My favorite game mode is the My Pet Dungeon campaign, in which you don't have to worry about being attacked. The only goal is to amass a certain score on each level, while you construct your dungeon to your heart's content. The campaign levels usually feature some goofy and fun objectives, and all such objectives are optional. They only help you amass score more quickly. You are also treated to some unique creatures that are not available in the other game modes. 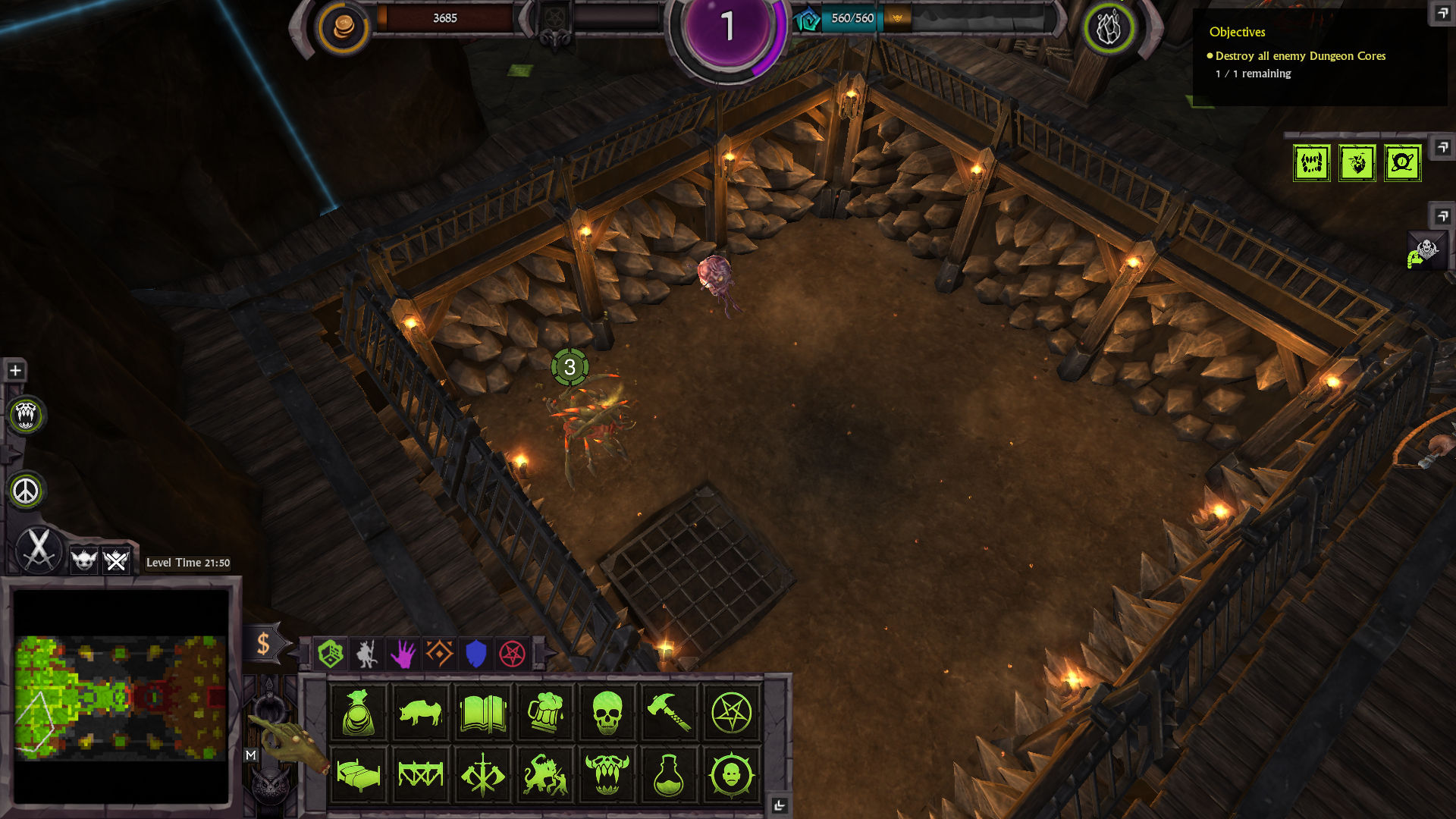 There is also a Crucible game mode, where you need to defend your dungeon against increasingly difficult invasions. I have not played this mode much at the moment as I prefer the story driven campaigns. This mode is really challenging you to get an efficient dungeon up and running quickly so you are ready for the constant attacks. Since the attacks come from multiple directions, you need to be really good at dividing your attention and setting up defenses on multiple fronts. 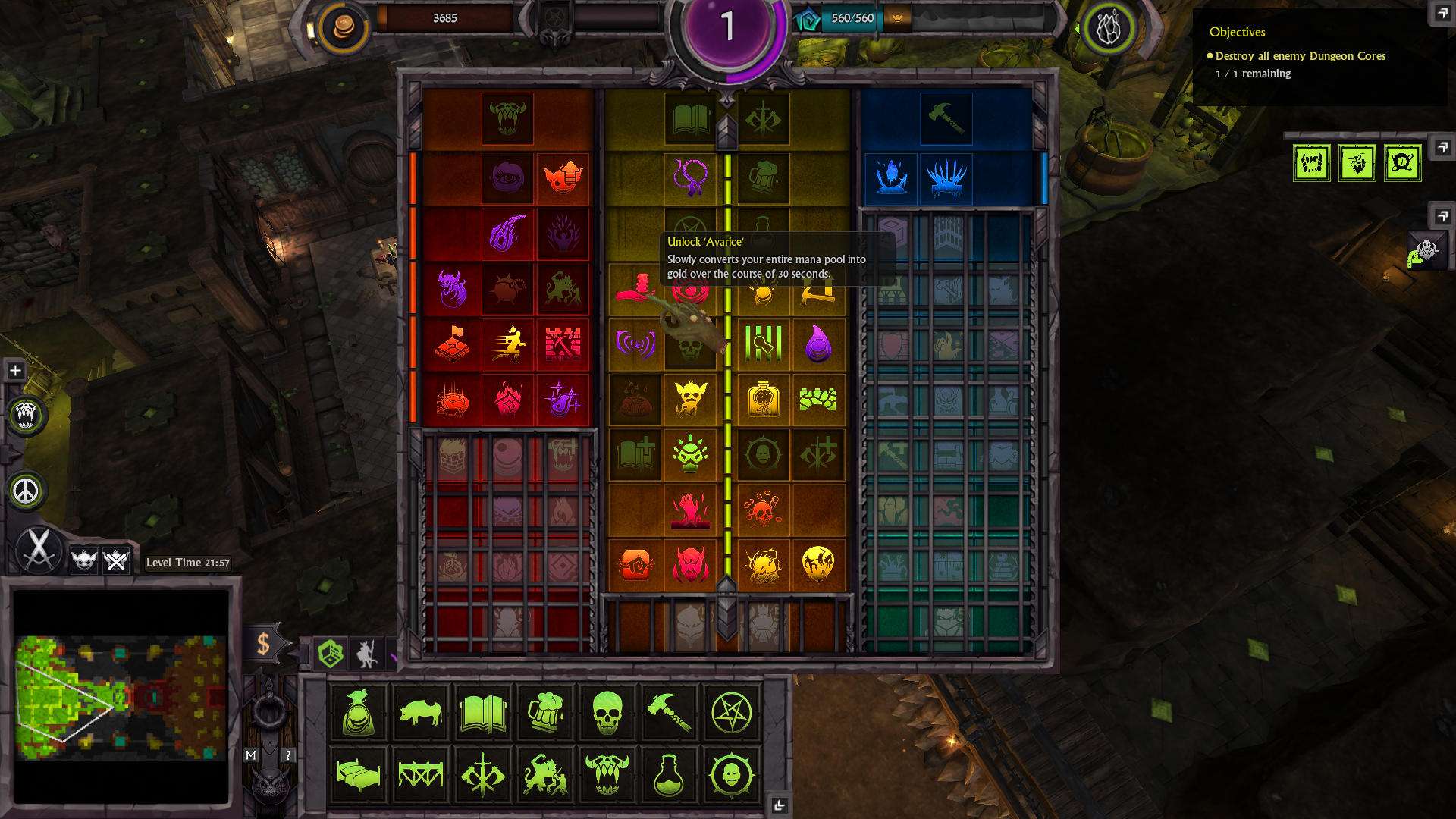 This game also includes a skirmish game mode, as well as multiplayer. With all the game modes available, there is a lot of content to keep you occupied for a long time. You are definitely getting your money's worth of entertainment here. 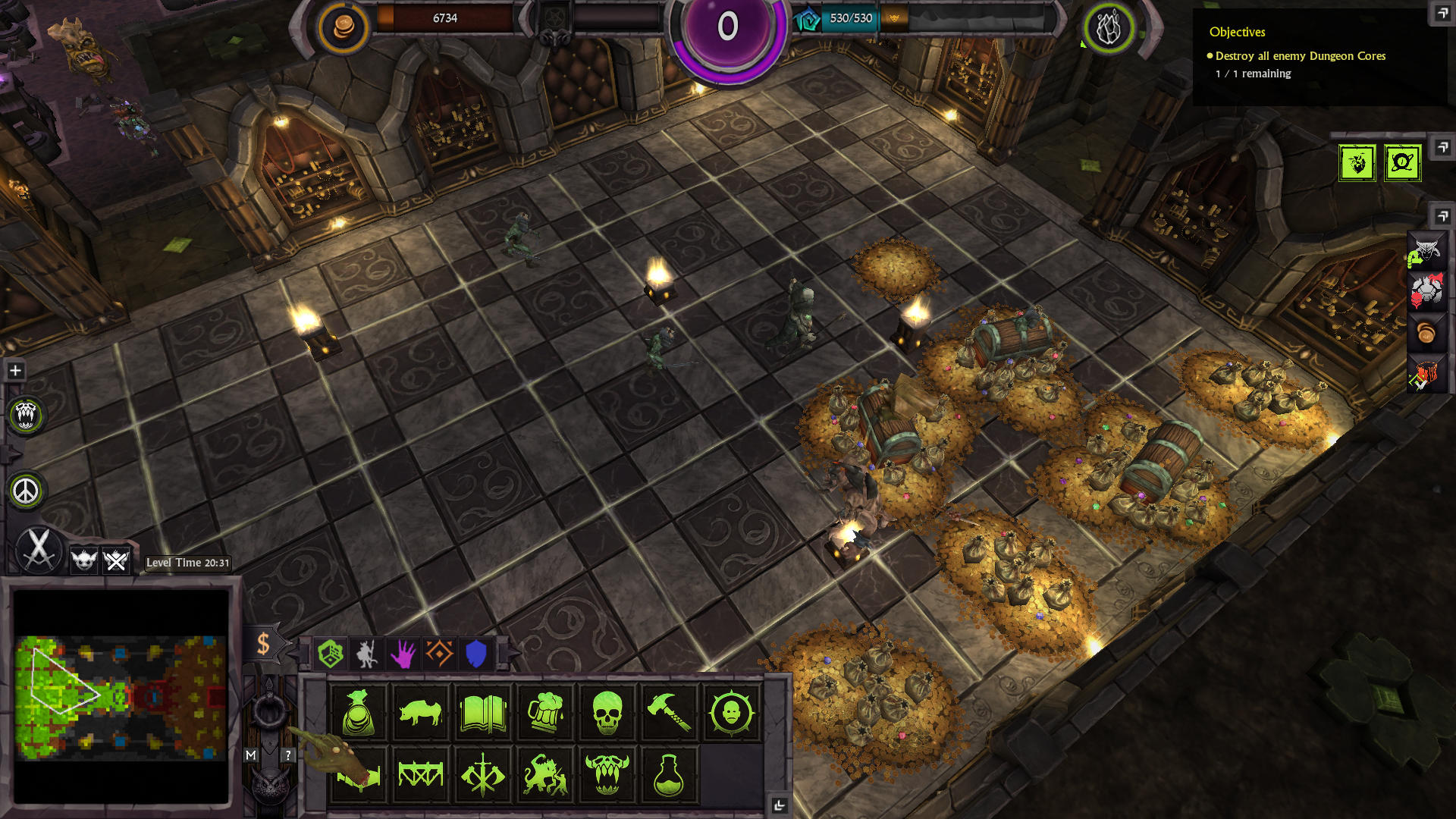 You are getting a solid package with this game, full of content with interesting gameplay suitable for most playstyles. It truly delivers as a worthy spiritual successor to Dungeon Keeper 2, retaining the classic core gameplay while adding new and interesting features. In case it's not clear by now, I absolutely love this game! It is firmly entrenched within my esteemed list of favorite games. Do yourself a massive favor and get this game!