This game was actually the very first game I ever played in the Might and Magic franchise. I was just 12 years old when I first tried this game, and it left a lasting impression. I played this when visiting an uncle who was quite an avid gamer. Several of my old favorites were first introduced to me from him and this is no exception. Back then games were released in nice boxes, frequently with nice artwork, big game manuals and often other goodies as well. I recall looking through the creature tables, comparing the strengths of the different creatures. To this day, I still find the artwork in this game to be my favorite.

For reference, you may want to check out my article on Heroes of Might and Magic.

Compared to the original HoMM, the actual gameplay is largely unchanged. This is a turn-based strategy game. You build armies from your towns, and you explore the world with Heroes who also lead your armies. Each hero has a certain amount of movement points each turn. The speed of your army determine how many movement points you have. An army consisting of slow troops will move slower than an army consisting of fast troops. Certain types of terrain cost more movement points to move across, while a road will help you move faster. 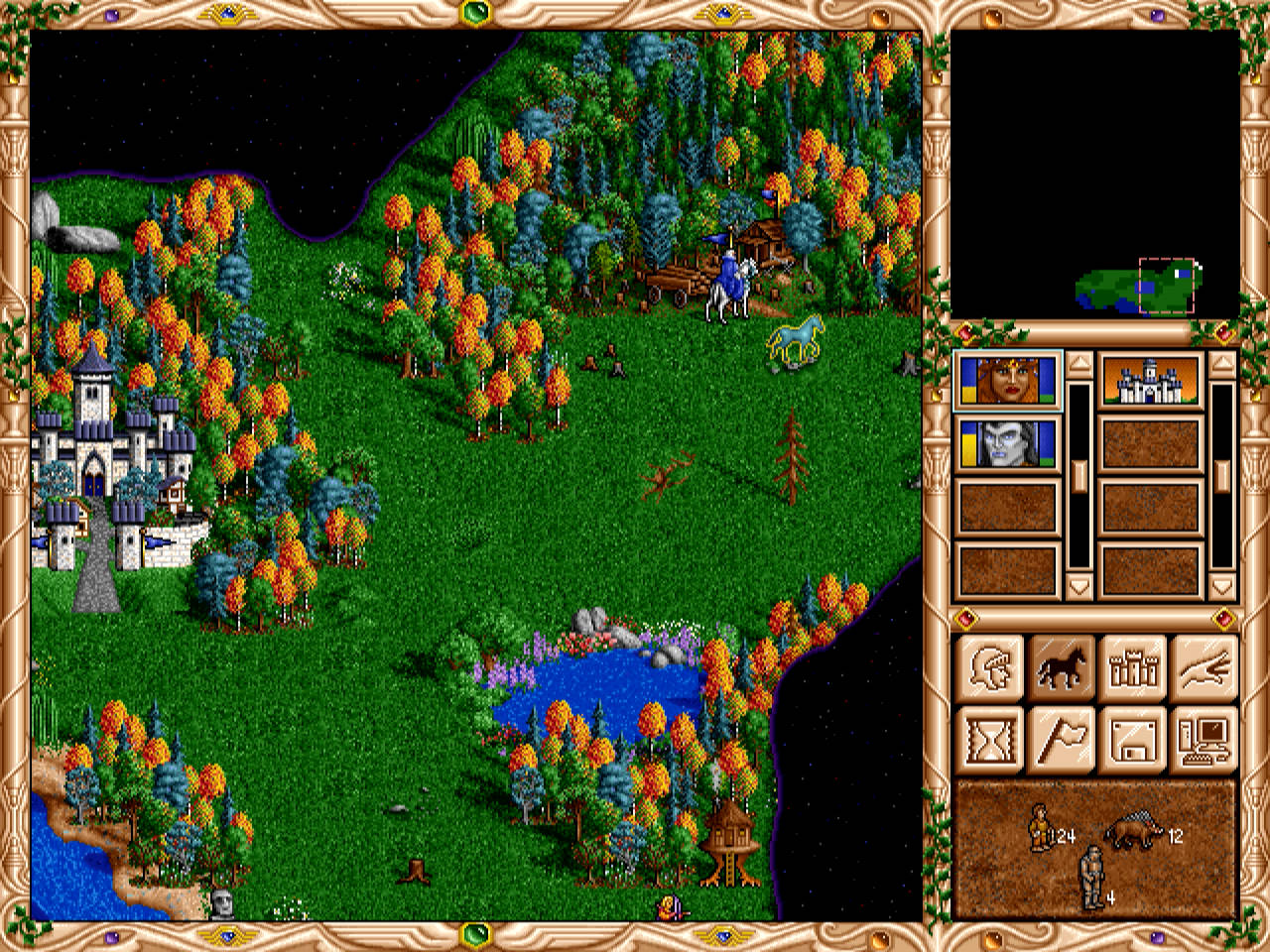 One of the changes from the original is related to the combat screen. Whenever you are engaged in combat, the game switches to the combat screen where the battles takes place. The size of the combat area has been increased, and every creature takes up smaller space. Combat now give you a lot more maneuvering space, this also means that the individual speed of your units become a lot more important than it previously was. Flying units are able to reach the entire combat field, which puts them in a unique category. Ordinarily, a unit can only move as far as their speed permits in a single round. This works the same as in the original, but the increased arena size emphasizes these aspects of combat. 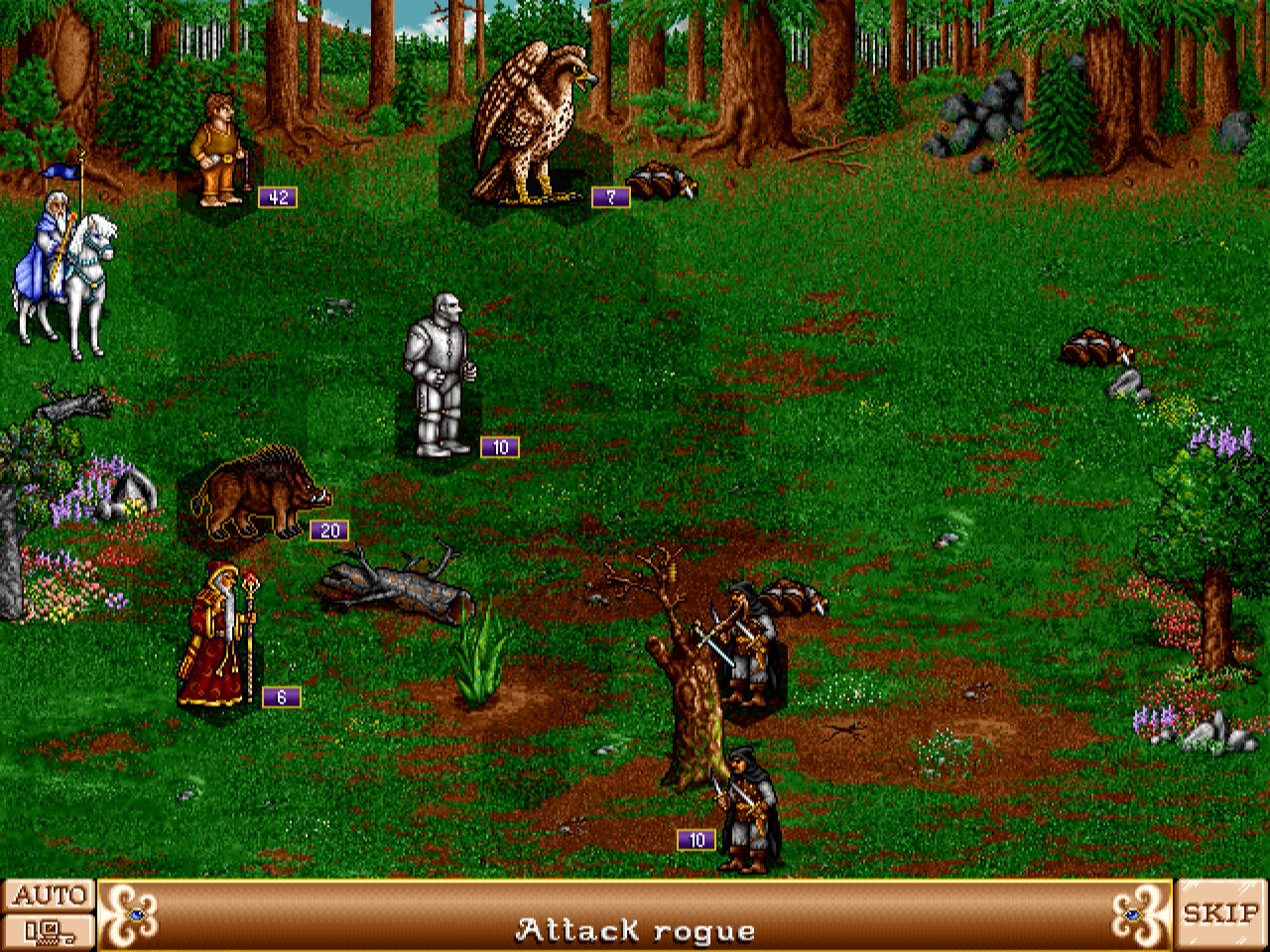 Spellcasting has changed quite a bit for this game. In the original HoMM, the Hero's Knowledge attribute would determine how often a Hero could cast a specific spell. After that, the Hero would need to revisit a Mage Guild to re-learn the spell. For this game, when a hero first learns a spell, it is permanent. Casting a spell cost a certain amount of spell points. The Knowledge attribute determines how many spell points a hero has. If a hero is not at full spell points, then the hero will regain a spell point at the end of a turn. This is a very nice change, since it means you no longer have to keep revisiting towns to re-learn spells. However, a trip back to town might still be warranted, since you will regain all your spell points if you end a turn within a town. 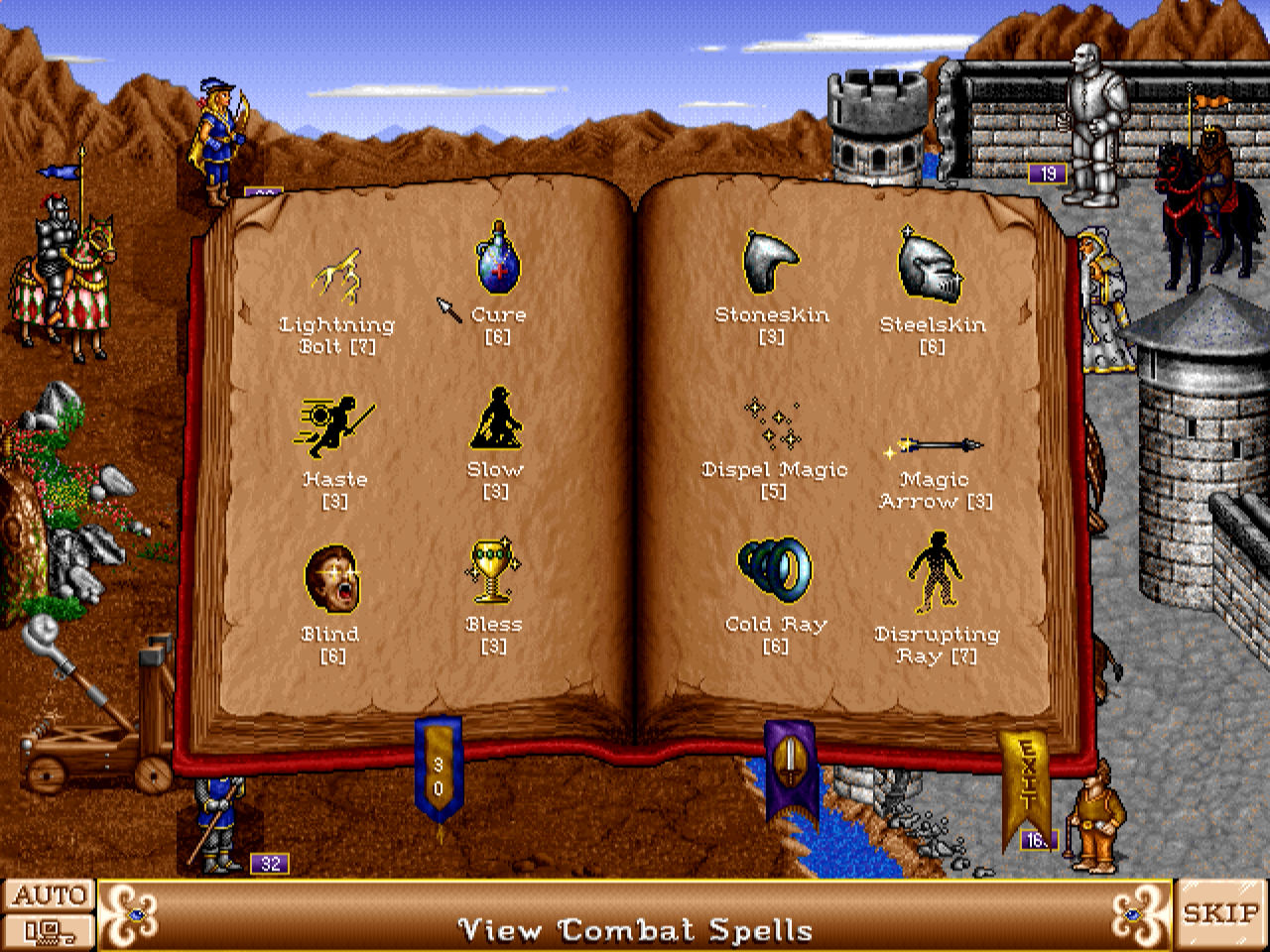 Now we are getting to what is probably the biggest change, secondary skills. There are no unique abilities to the different hero classes, instead the heroes will learn secondary skills. Each time a hero reaches a new level, they will have the option between two skills. This is usually a choice between improving a skill they already know, or learning a brand new skill. Secondary skills have three levels. When you first learn a skill, it is at the basic level. Then it can be improved to advanced, and then to expert. Some skills give you more movement points, or let you move across difficult terrain easier. Then there are skills that give you a chance to learn spells the enemy use during combat, or regain spell points faster. The higher level spells also require a secondary skill. I will not go into further detail on the different skills available, but I think it is easy to see how the choice of skills allow for varied customization of your heroes. Each hero can learn up to 8 secondary skills. 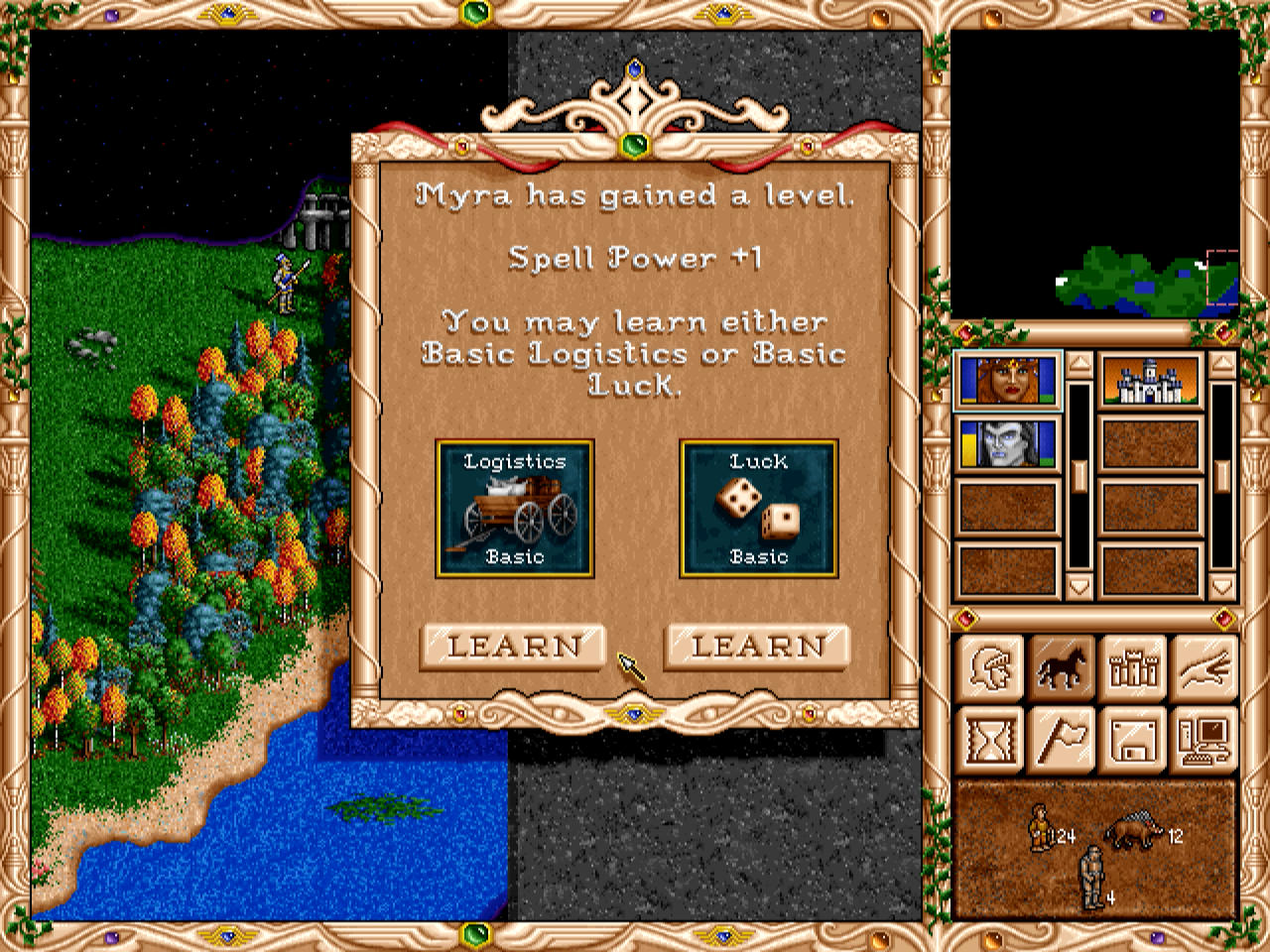 In the previous game, there were four factions to choose from. The Knight, Barbarian, Sorceress and Warlock. For this game, two additional factions are added, the Wizard and the Necromancer. The Wizard's troops range from weak troops like the halfling and boars, up through golems, rocs and mages. Then the most powerful is the giant, which can be upgraded to Titans who rival the black dragons for raw power. The Necromancer has undead troops such as skeletons, vampires, liches and the powerful bone dragon. The Necromancer's specialty is the necromancy skill. After winning a battle, some dead troops will be raised as skeletons for the Necromancer's army. 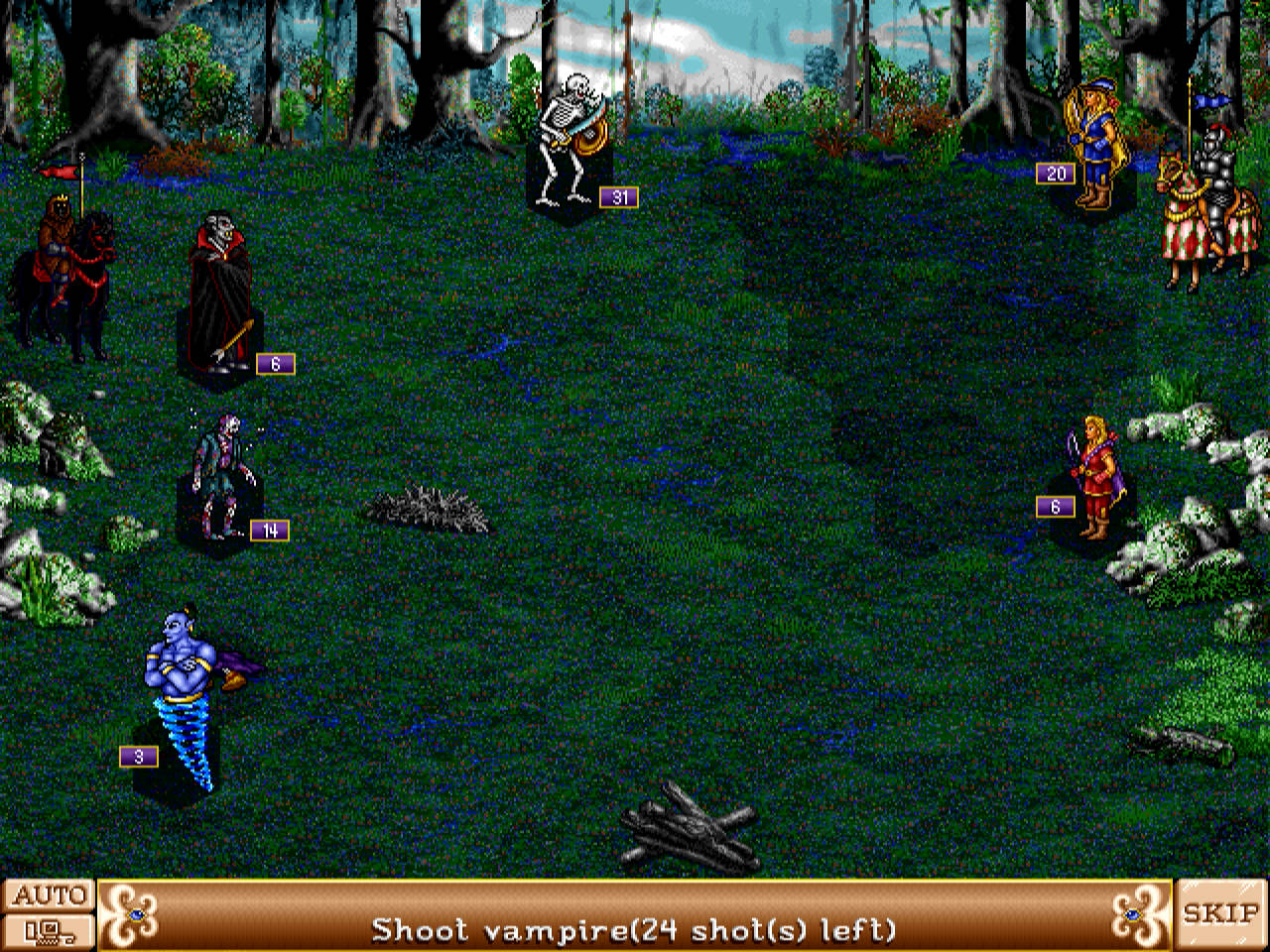 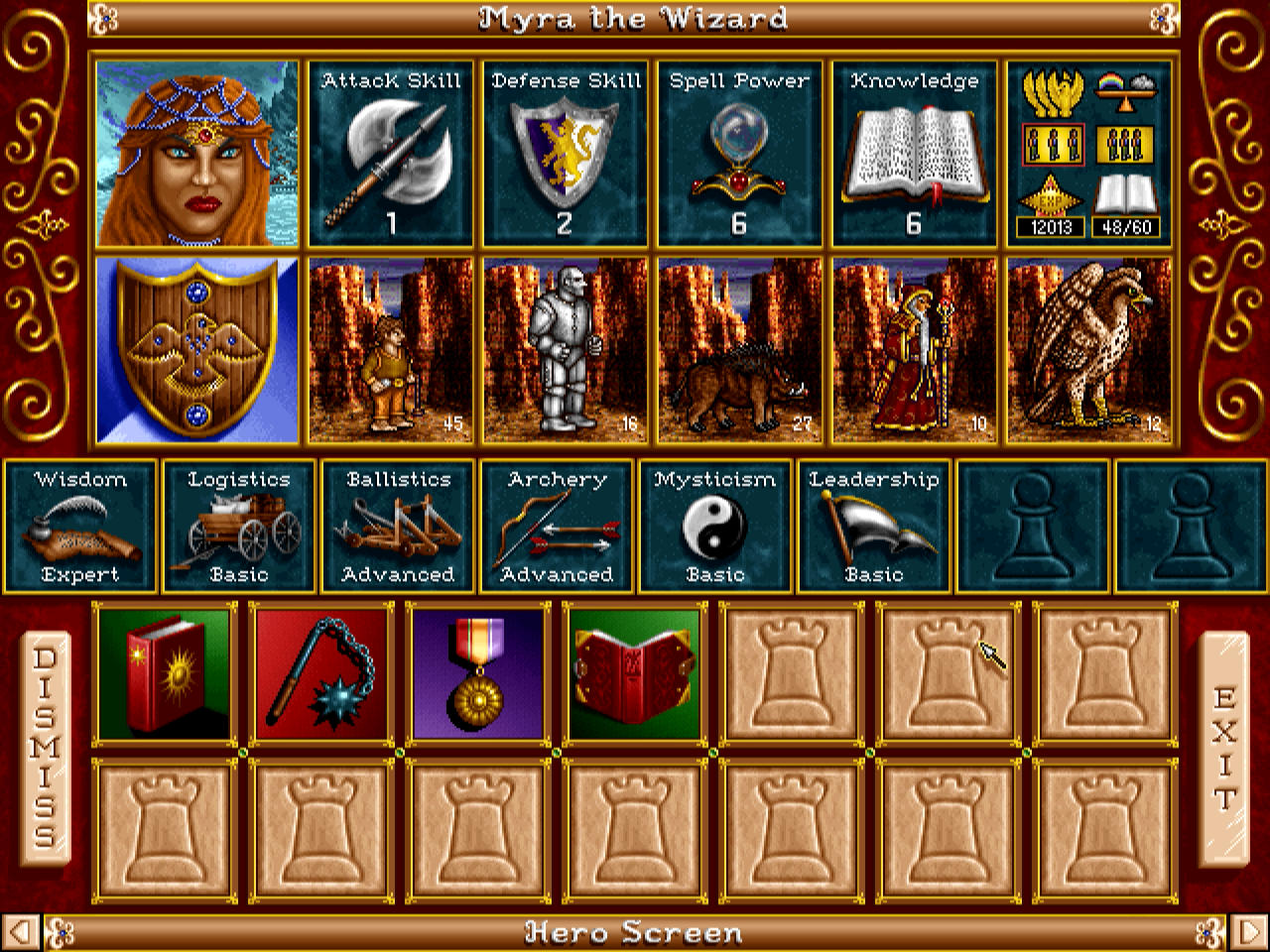 The game features a large collection of single scenarios which can either be played single player or multiplayer. Since the game is turn based, multiplayer can be played on the same computer in hot-seat mode. There is also a map editor for those who wish to create their own maps. Playing single scenarios will let you select a difficulty, so the gameplay can be tailored to any skill level.

There is a single player campaign which offers a choice of which side to support. Each side in the campaign has three of the six factions associated with them. The difficulty is gradually increasing through the campaign so it is a good way to learn the game, although it is a lot more difficult than most modern games.

The Price of Loyalty expansion

There was an expansion for this game, which was developed by another company. The expansion was released in 1997, and added some additional structures for the adventure map, as well as an evil shrine for the Necromancer's town. There are additional campaigns, but these were not designed by New World Computing and have no relation to the Might and Magic universe.

Some additional artifacts were also added to the game, but overall I feel like this expansion did not add much of significance. The campaigns might be worth it though, as they can provide an interesting challenge. 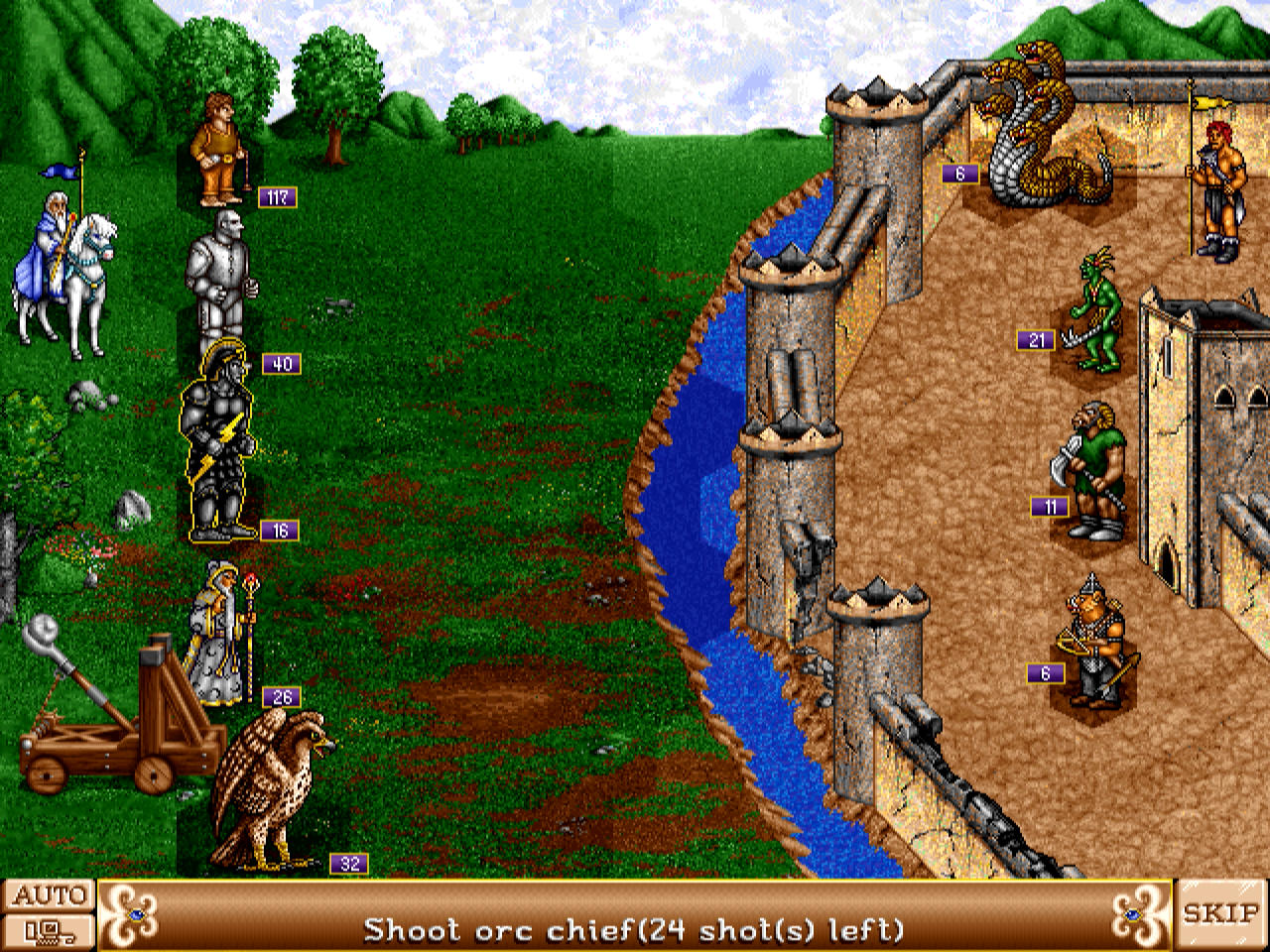 As has been tradition for my articles on the Might and Magic universe, I will do a summary of the game story. I will only write about the campaign for the Succession Wars since the expansion campaigns are not part of the franchise continuity.

In Heroes of Might and Magic, Morglin Ironfist succeeds in conquering the land of Enroth, building his kingdom. We must assume that he had a prosperous reign and good life. As he passes away from old age, he leaves behind two sons. Roland is considered to be good, kind of honorable, while Archibald was not so good. The royal seer was supposed to name the successor, but he and his successors all died. Archibald accused Roland of murdering the seers, forcing Roland to flee for his castle in the west. Archibald then influences the next royal seer to support him, and Archibald crowns himself king.

At this point, you have the option to choose which lord to support in this war. We will be focusing on Roland's story, as his campaign leads to the canon outcome of this war. 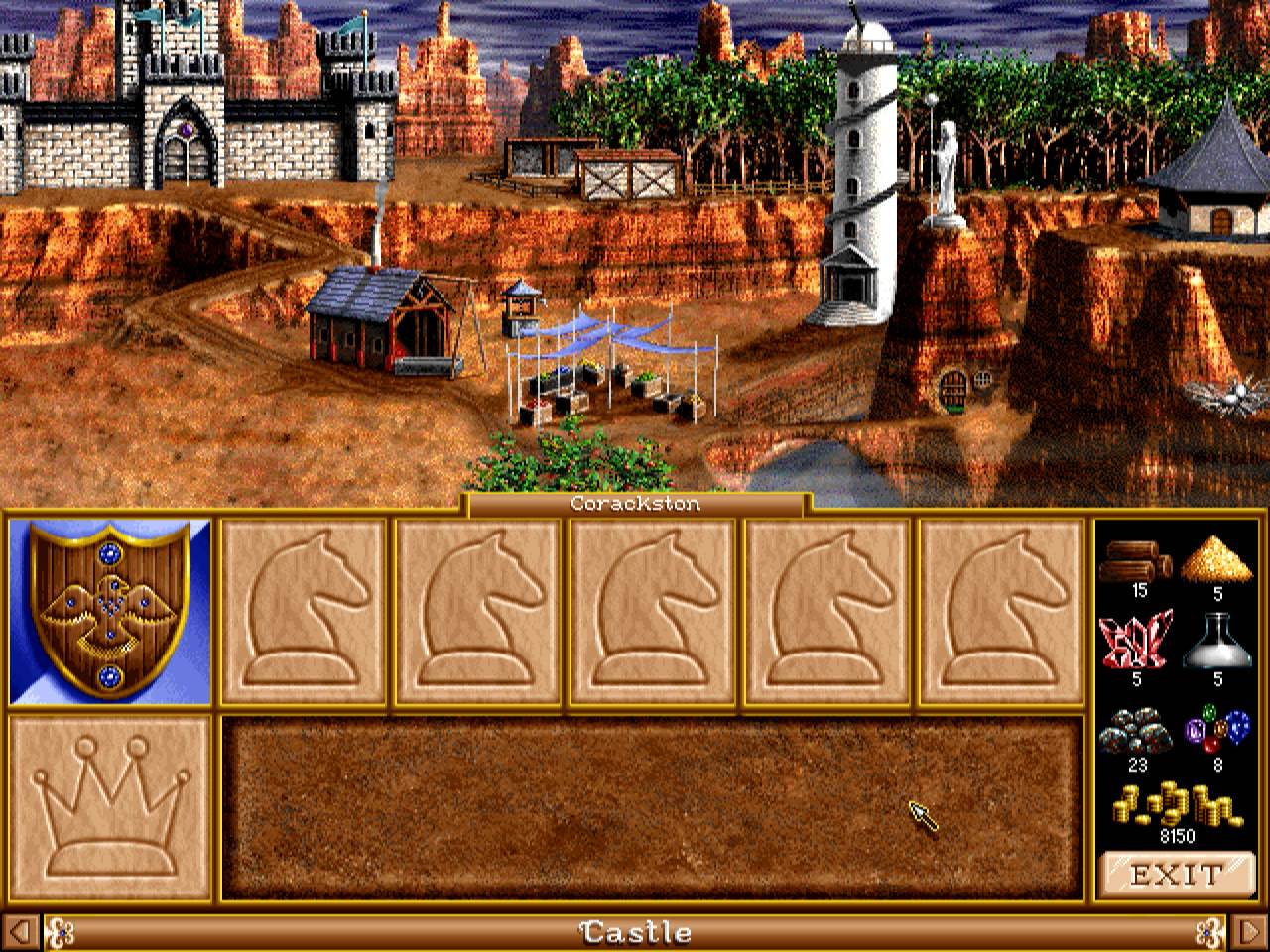 The war begins with Roland securing the area closest to his own castle and subduing the nearby lords before Archibald can sway them to his side. Rocklin, the king of the dwarves, contacts Roland for help as Archibald is raiding the dwarven lands. Roland protects the dwarves, which earns him their allegiance for the rest of the war. Roland then proceeds to secure resources from the Carator mountains. 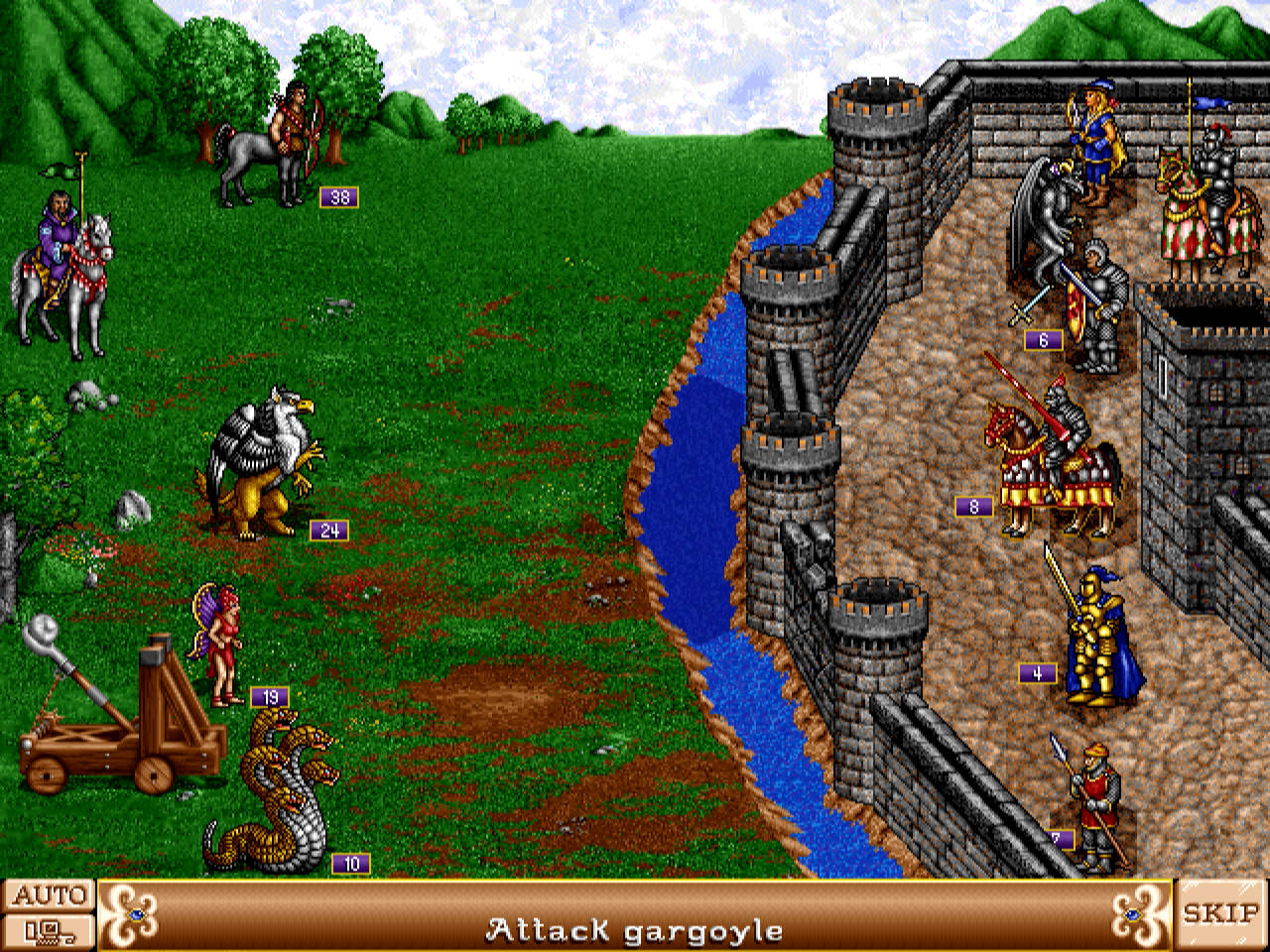 The general will need to make another choice. Either deciding to quest for the Ultimate Crown, or instead raising an army for the final battle. After completing the objective associated with the general's choice, Archibald will launch a counterattack. Lord Haart assisted the general in fighting back Archibald's offensive. During this battle, one of Archibald's more dangerous commanders, Lord Corlagon, is captured by Roland's forces. 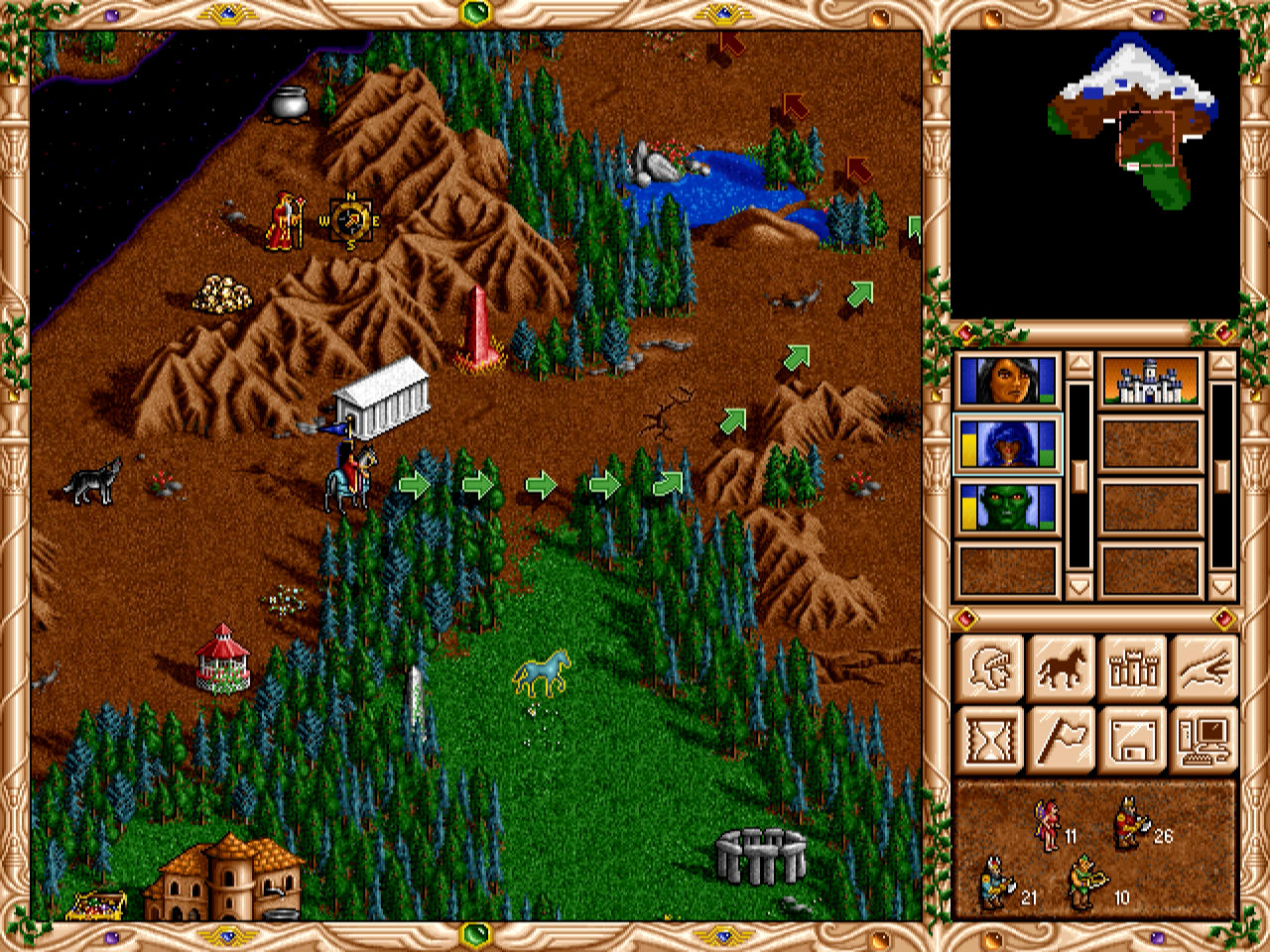 Finally, it is the last battle. Roland participates directly in this battle to fight down Archibald's forces and capture Archibald himself. After the battle, Roland has Archibald turned into stone and locked away in the castle. Roland has succeeded his father as king. 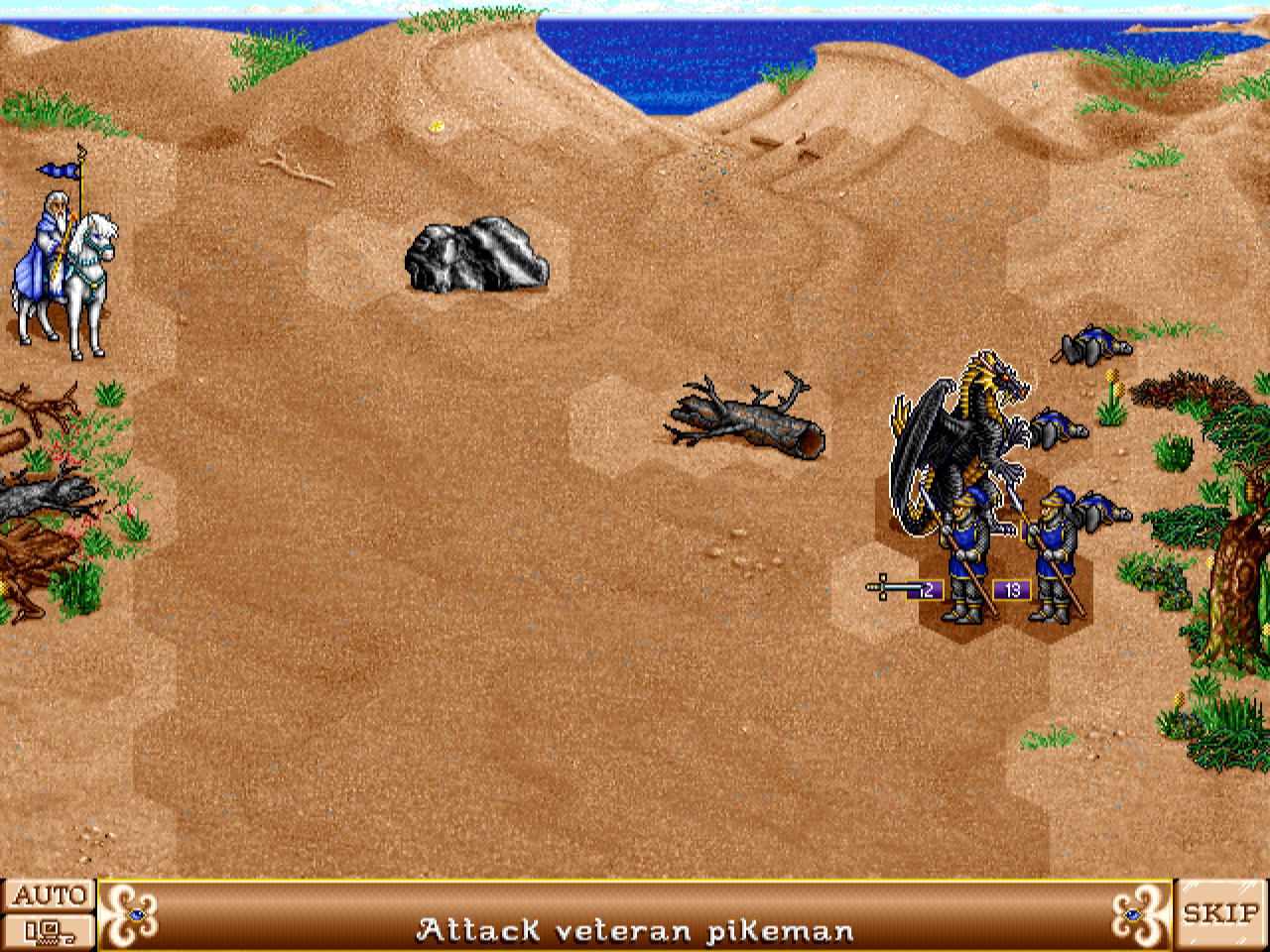 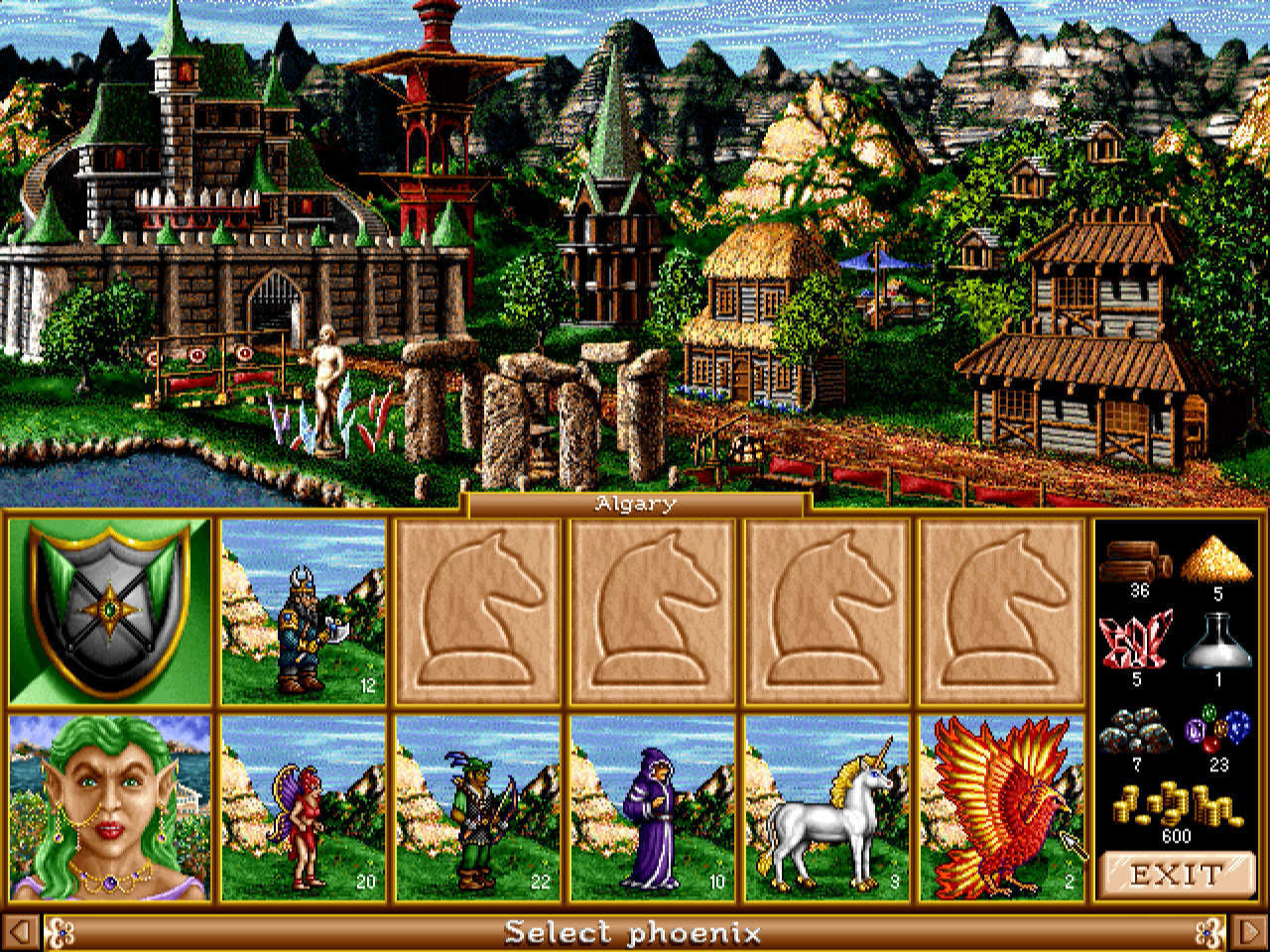 In my opinion, all the changes from the original are improvements. The artwork is better, the gameplay is refined. It's like this game is an improved version of the original. I don't want to talk down the original, but if you have this game then there really is no reason to play the original. This game got everything the original game got, improved and with additional content. 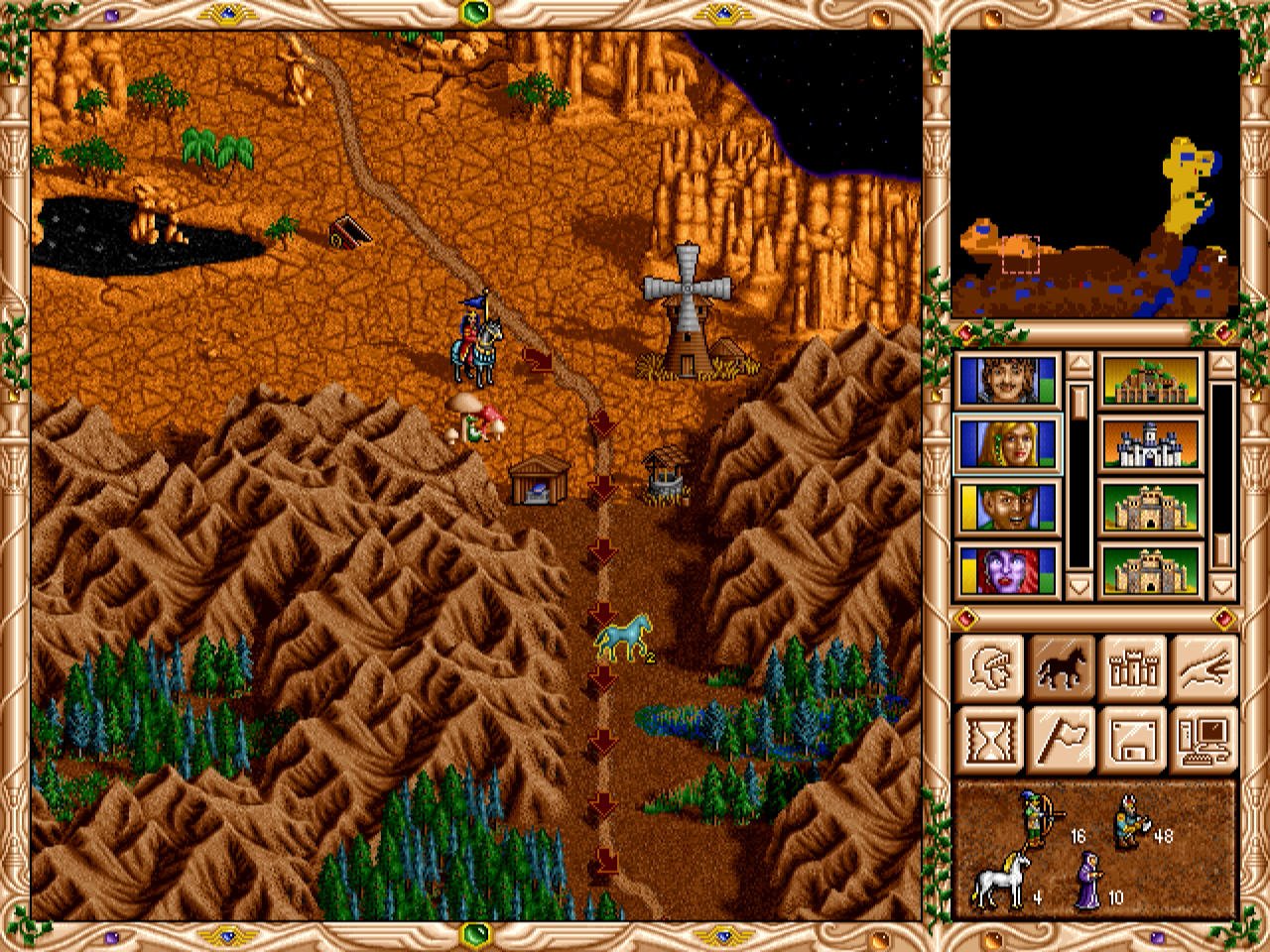 With all the maps, along with the map editor, you would be hard pressed to run out of stuff to do in this game. The factions are very different from each other so that the game is significantly different based on what faction you choose. Although the overall strategy might be similar, combat tactics is vastly different between the six factions.

This game is a true gem of very high quality. There really is no other way to put it, and you would be doing yourself a great disservice by never playing this game.

The next release in the larger series is Might and Magic VI, the story also continues in that game.