In 1995, New World Computing released a spin-off title from the Might and Magic series. For this article, we will have a look at the very first Heroes of Might and Magic: A Strategic Quest.

For those interested, my article on the previous release in the series was Might and Magic - World of Xeen.

The gameplay concept is actually quite simple, which is probably why the Heroes series became successful. Learning how to play this game is quick, but the strategy involved still takes a while to master. We will have a look at the different aspects of the gameplay, starting with the Adventure screen. 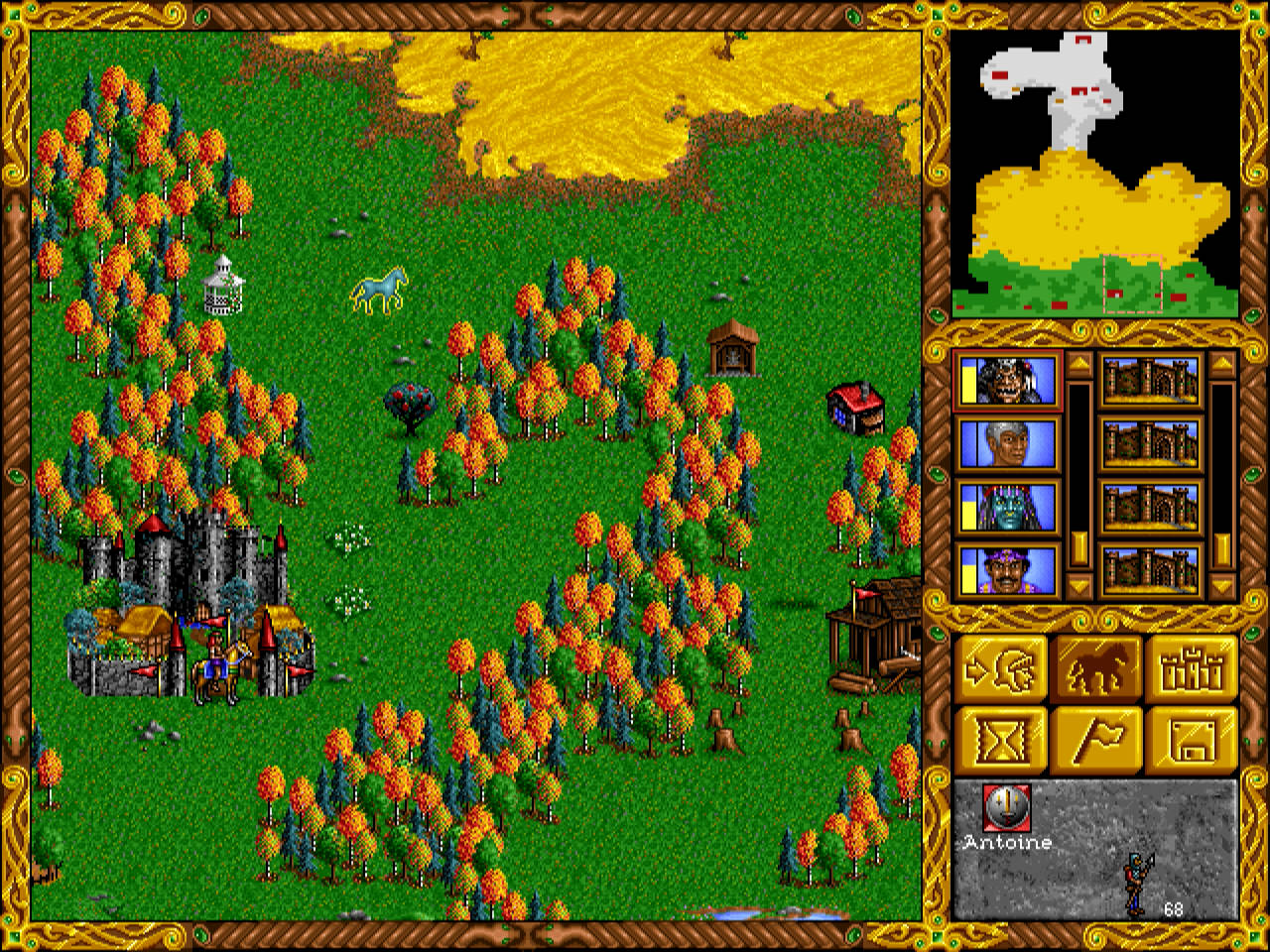 This screen is what you will be seeing the most. On this screen you can see everything you have explored so far of the world, and this is where you find treasure and encounter enemies. Anything that is owned by a player, towns, heroes, mines, will be carrying a flag with that player's color. Areas you have not explored is concealed by darkness, which is uncovered as you explore. While exploring, you can find treasures that give you resources, gold or artifacts. Resources and gold is required to construct buildings and hire more creatures. Artifacts will usually give a boost to the statistics of the carrying hero. Any mines you claim will generate a small amount of a specific resource every day. Each turn in the game is considered to be one day. 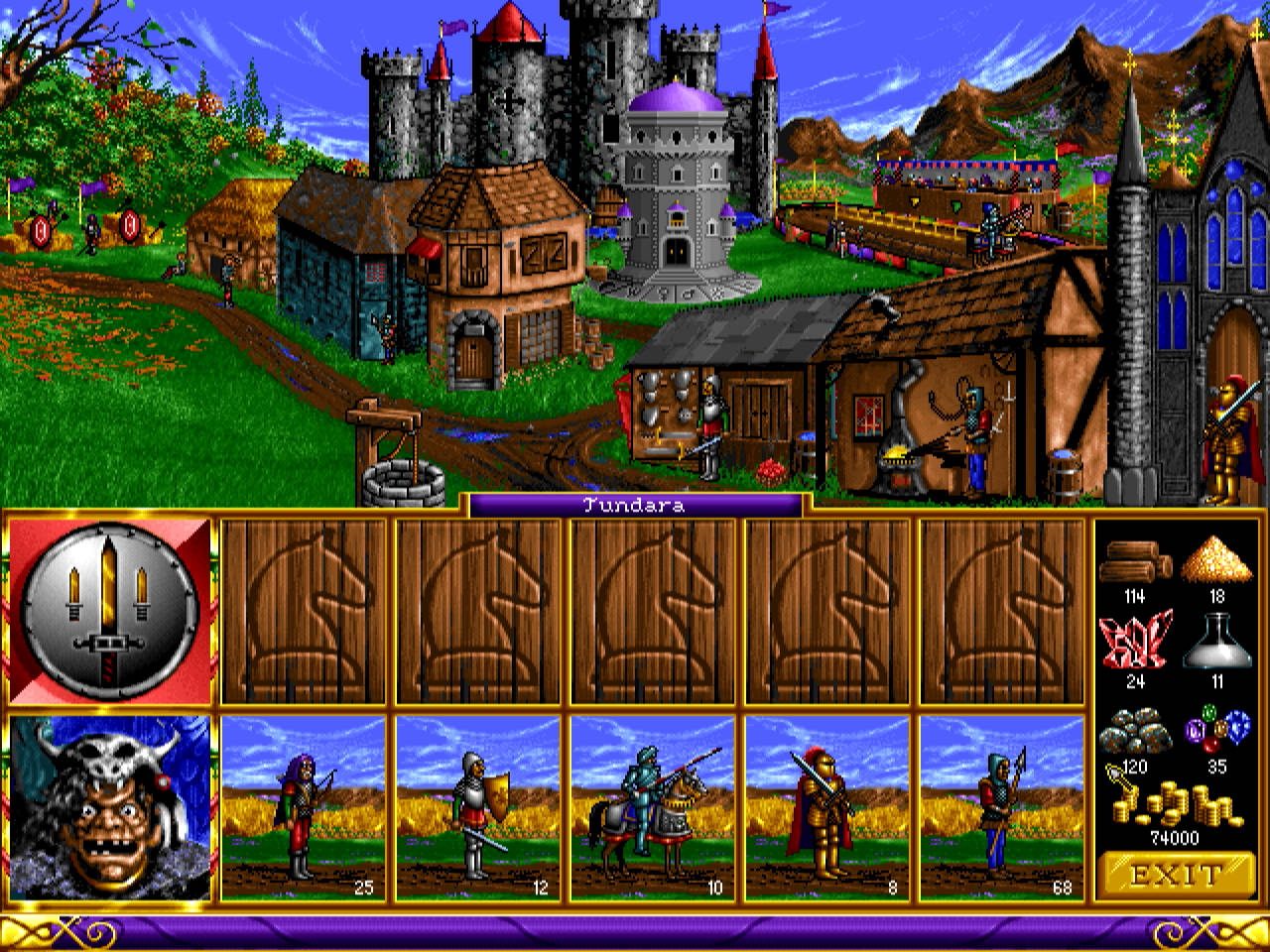 Usually you begin with a single castle, but you will be able to claim new castles as you explore. Each day you can construct a single building in each castle you own, provided you have the required resources. Some buildings will let you hire additional troop types, these buildings are usually referred to as creature dwellings. All of your creature dwellings will offer new troops at the start of a new week. You can construct a well, which will increase how many new troops you receive when there is a new week. There is also an upgradeable buildings which will let your heroes learn spells. The thieves guild will let you learn a little bit about how your kingdom is doing in relation to other players or computer opponents. If you have the ocean close to the castle gate, then you will be able to construct a shipyard where you can build ships.

A lot of the gameplay revolves around heroes. You normally start each map with one hero and you can always recruit additional heroes in a castle. Only heroes can move around the adventure map, they are the generals of your army. Each hero can have five troop stacks. Each troop stack represent one type of creature, but it can be of any size, from just one single unit up to hundreds. There is a number on each troop stack which indicates the size of the troop stack. Heroes have four statistics. Attack and Defense directly contribute to their troops attack and defense stats, so having these high will make your army a lot more effective. Spellpower and Knowledge are related to spellcasting. Whenever you visit a mage guild you will learn all the spells there, provided your hero has a spell book. A spell book can also be purchased at the mage guild, if required. When a hero learns a spell, they will be able to cast it a number of times equaling their Knowledge stat, after this point the hero will need to revisit the mage guild to re-learn the spell. Spellpower will directly improve the strength of some of your spells. Direct damage spells will usually do more damage with a higher Spellpower stat, while some other spells have increased durations. 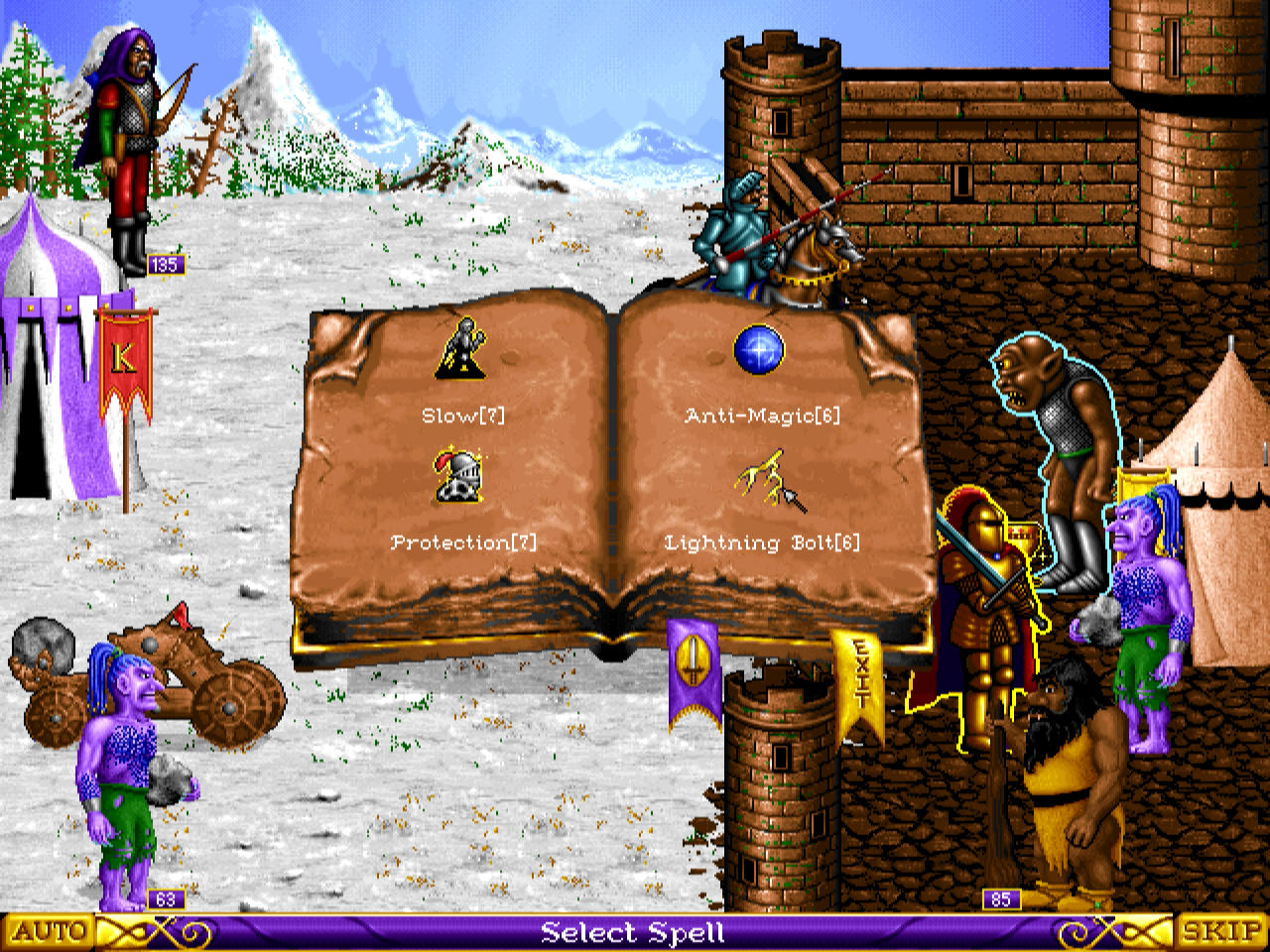 Your hero will gain experience with each won battle. There are also certain objects on the adventure map that will give a visiting hero experience. Once a hero has gained enough experience their level will increase. With a new level the hero will have one of their four statistics improved. Which statistic that improves with a new level is chosen randomly, but certain statistics are more likely to improve depending on what class the hero belongs to. 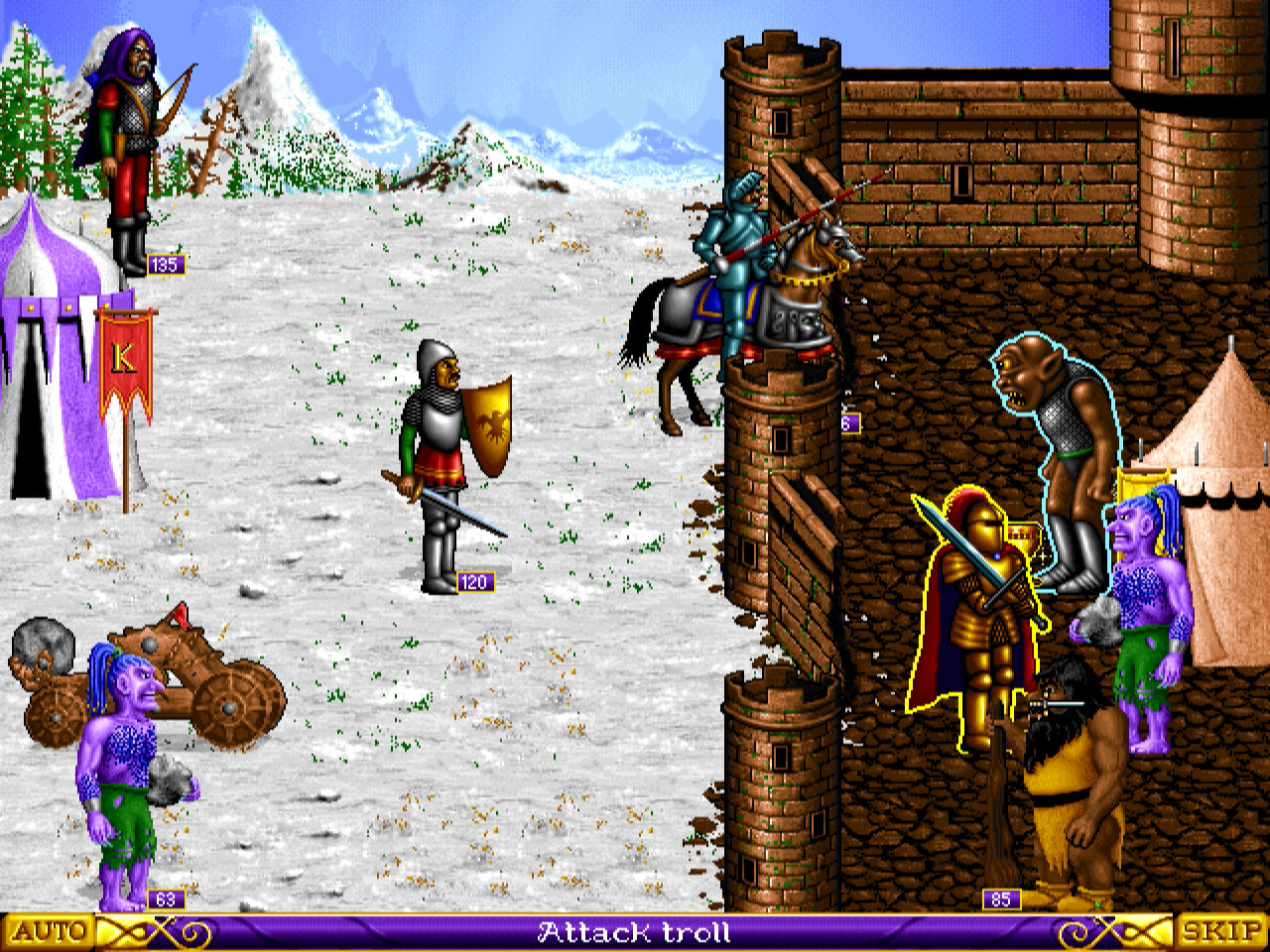 Now let's have a look at combat. Combat starts when either your hero engage a neutral troop on the adventure map, an enemy hero, or a town that does not belong to you. It can also be initiated if an enemy hero engage one of your heroes or towns. Your hero do not participate directly in combat, except for the ability to cast one spell per combat round. All creature types have a speed attribute, in each combat round each creature get their turn according to their speed. Fast troops get to do their turn before slow troops. There are some troops who are able to fly, they can move past any obstacle on the combat map and they also have no limit to how far they can move in a single turn. Ranged troops are especially useful as they can target and attack any enemy stack. This is especially useful when attacking an enemy castle. During such a siege, the enemy troops are safe behind the walls and only flying troops or ranged troops can attack them. All other troops must wait for your catapult to break through the wall, which usually takes several combat rounds.

It is important to try and be as efficient as possible in each combat. You want to win with as few losses as possible. If victory is not possible, then you want to ensure that you do as much damage as possible before losing your troops. If you do lose a combat, your hero will abandon your cause. However, this hero, along with all experience and artifacts, will become available for hire again. But it is random when the hero will appear among the heroes available for hire, so you can't expect to get your hero back quickly. 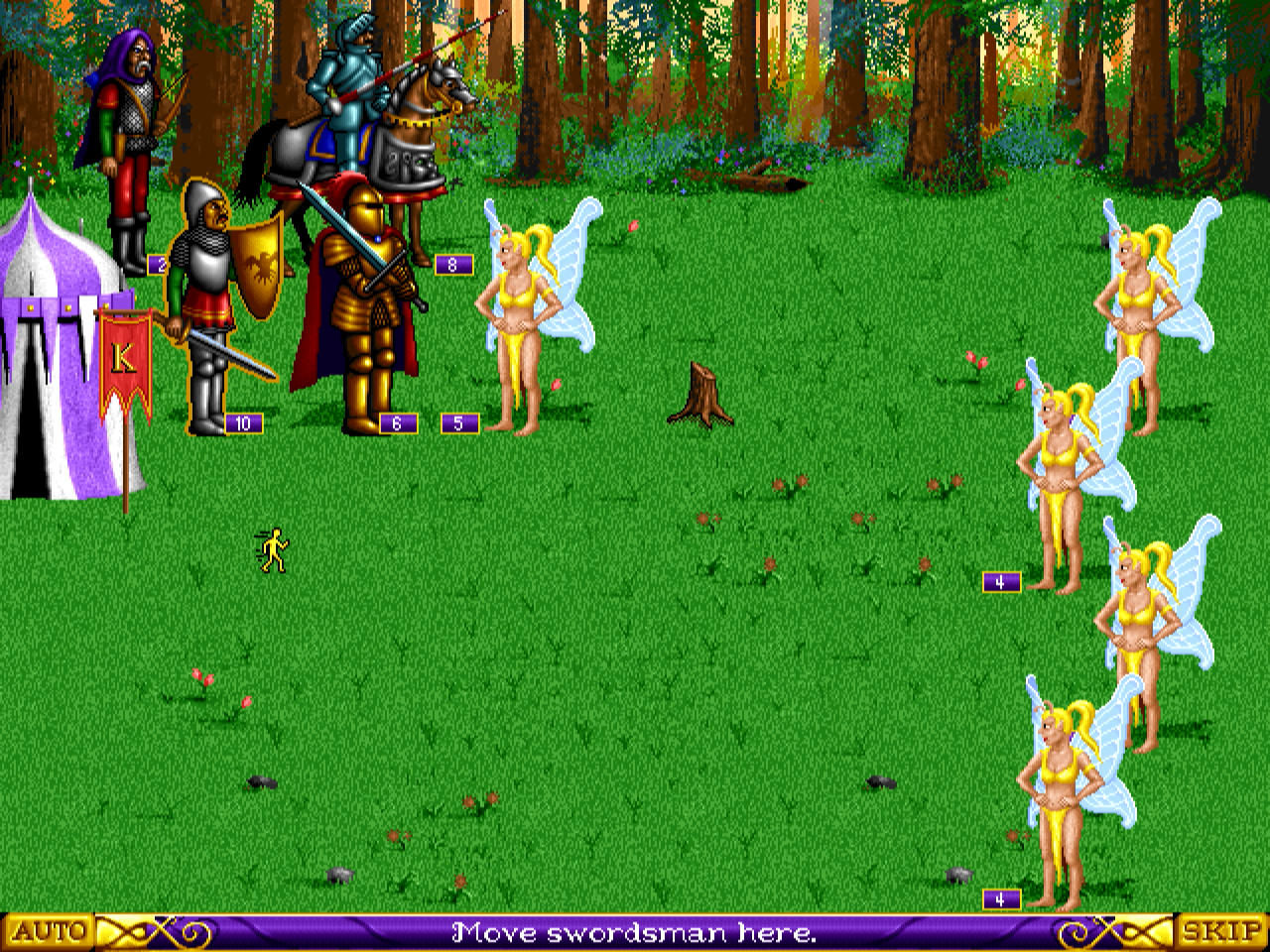 The game features four different factions. Each faction has their own troop types as well as hero class. Firstly you have the Knight, which has the Farm town. The troops in this town are your typical european medieval army. The strongest troop here is the Paladin, clad in golden plate armor and carrying a large sword. The Knight hero's special ability is improved morale for troops. Higher morale gives your troops a chance to get a second turn in the same combat round. The Knight is obviously associated with Might.

The second Might faction is the Barbarian, with the Plains town. The creatures available here have a more brutish appearance with orcs and ogres. The most powerful troop is the Cyclops, which has a chance to paralyze enemies. The Barbarian hero's special ability is to move across rough terrain without penalty. All other heroes spend more movement points when they cross rough terrain such as snow or a desert. Since the Barbarian has no penalty on this terrain, they are able to either catch up to fleeing enemies or more easily flee themselves.

Next is a Magic faction, the Sorceress with the Forest town. Elves, dwarves and unicorns, along with the powerful Phoenix, are some of the troop types available for this faction. The Sorceress hero begins with a spell book, which is appropriate for a magic oriented hero. The special ability of the Sorceress is to have double movement points when sailing on water.

Lastly we have the final Magic faction, Warlock. The Warlock has the Mountains town, populated by centaurs, gargoyles, minotaurs as well as the awesome Dragon. The Warlock starts with a spell book, and has a larger visibility radius on the adventure map. 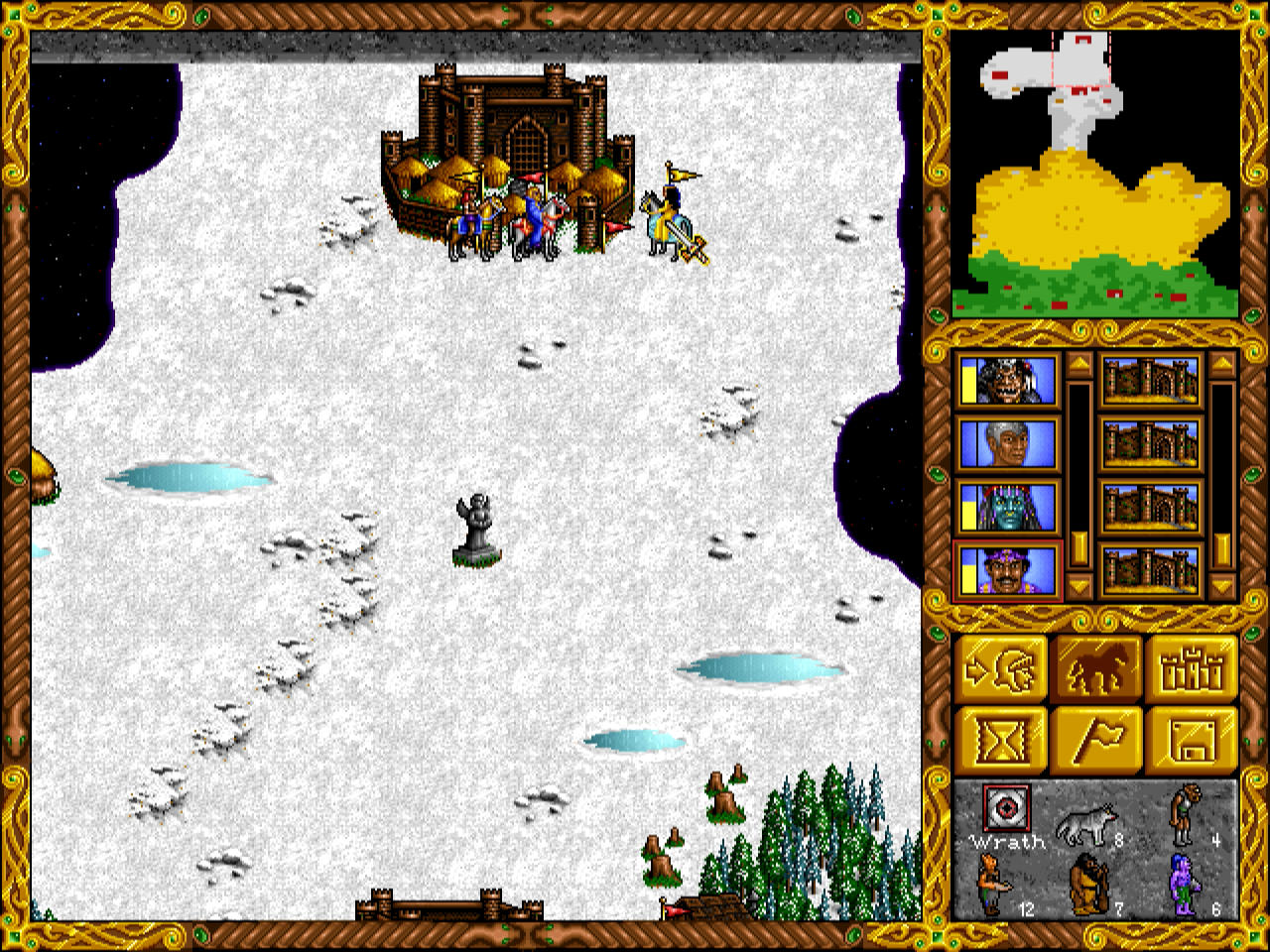 The game manual has a pretty long backstory for this game, but in the game itself the story is less important. Still, it is actually an important part of setting up the continued story for the series. 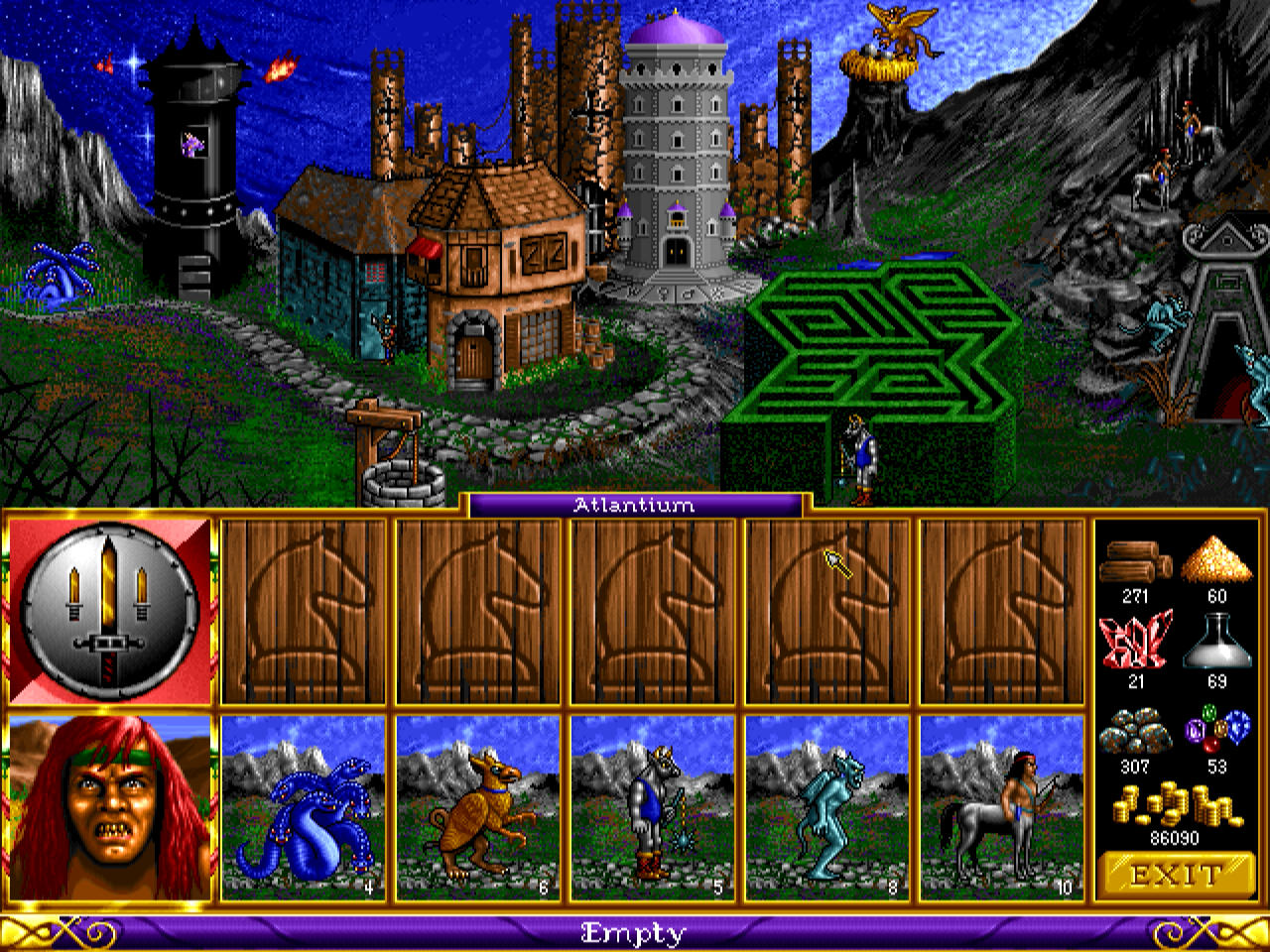 Morglin Ironfist, cousin to King Ragnar Ironfist of Varn, accidentally passed through a portal which brought him to an unknown land. Morglin had apparently attempted to have Ragnar assassinated as revenge for Ragnar's father assassinating Morglin's father and usurping the throne. Morglin Ironfist was attempting to escape retribution for his attempted assassination, and had brought some of his most loyal followers along. They accidentally passed through a portal, which seemed to have been one way as they were unable to get back.

In this new strange land, they start to set up territory. In this process they encounter three other lords that also attempt to lay claim to the land. And this is the setup for the game. The campaign lets you select one of the four lords. Lord Ironfist the Knight, Lord Slayer the Barbarian, Queen Lamanda the Sorceress, or Lord Alamar the Warlock. In case you are wondering, this Alamar is not associated with Sheltem from the previous games. 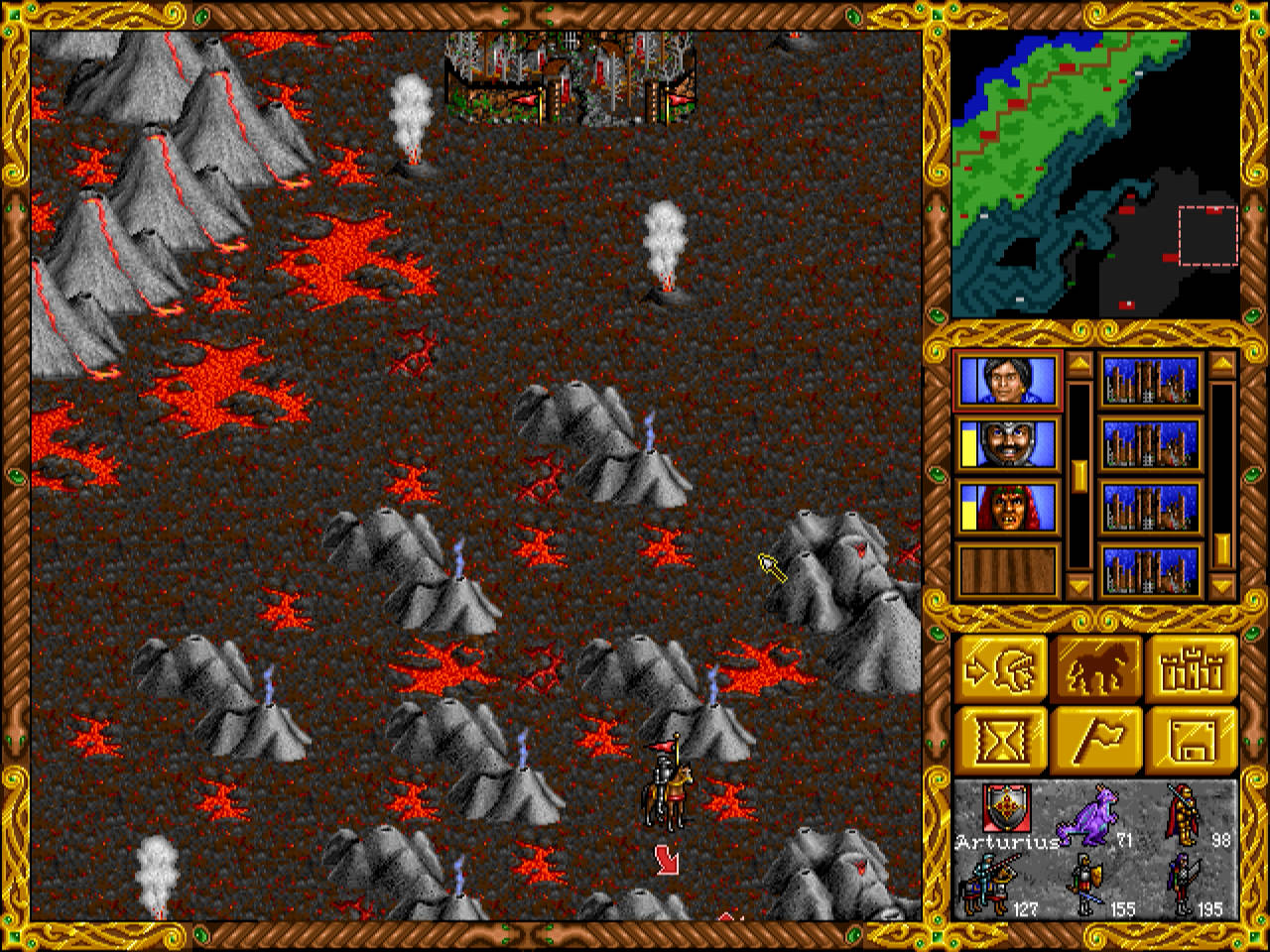 The game lets you play from the perspective of anyone of these, but the canon story follows Lord Ironfist. At first Ironfist fights to gain a foothold in the new land. First claiming an archipelago, then getting a proper foothold on the mainland. After this, the fight is taken to each of the enemy lords individually. However, the three enemy lords then decided to band together in an attempt to defeat Lord Ironfist. His last hope was to conquer the Dragon Citadel and enlist the aid of the dragons, with which he would become the undisputed ruler of this new world.

This game is quick and easy to learn, but requires a lot more effort to master. The four different factions make for improved replayability. There are also lots of single scenarios, and the option to play hot-seat multiplayer is definitely a winning point. Overall, this is a very fun and entertaining game that you can put hours into without becoming bored. 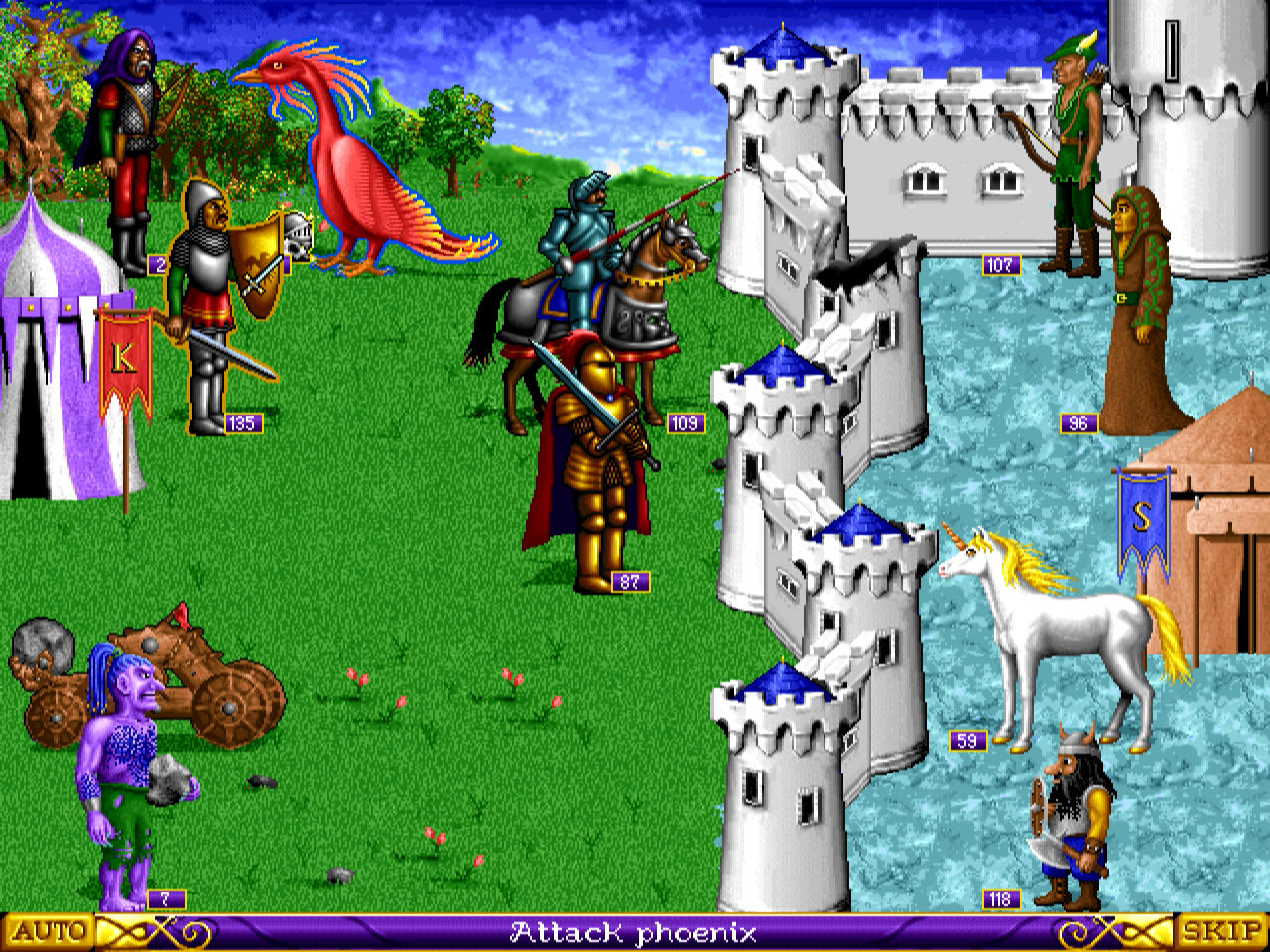 The only thing I feel is a bit lacking is hero development. The random increases to stats is not particularly satisfying and I would like to be able to guide my heroes development a bit. But apart from this, I can't really see any bad sides to this game.

I also find it important to note that sequels in this series greatly improved on this original formula. It is no secret that it was the Heroes of Might and Magic games that produced the big sales and greatly grew in popularity. Personally I am still a bigger fan of the original Might and Magic series, but I consider the Heroes series to be an important part of the larger series, and they also end up doing most of the storytelling for the game universe.

Despite all the positive points about this game, you would still be better off playing some of the later Heroes games since this game does not really offer anything unique on its own. On the other hand, it is a very interesting experience to see the first incarnation for the Heroes series.

Next up is Heroes of Might and Magic II: The Succession Wars.