In 1988, New World Computing released Might and Magic II: Gates to Another World. This is the second game in the Might and Magic series, and quite an improvement over the first. There is also a greater focus on game story. The manual for the game has a four page backstory, which give you a proper introduction to the world.

Playing through this game, it is very quickly obvious that there are not too many differences from the first game. The good thing is that anyone familiar with the first will already know how to play this game. However, anyone who are unfamiliar with older games are going to have a hard time getting into this game. You still need to use the manual in order to cast spells, unless you memorize spell levels and numbers. You are also left to figure everything out by yourself without much guidance. My article for the first Might and Magic game goes into detail on most of the game mechanics, I don't intend to do the same here, instead I shall focus on what makes this game unique. For those interested, here's a link to my first Might and Magic article.

Just launching this game, you will already see the glory of late 1980's graphics. We've got colors! Lots of colors. So now you actually get a much better view of your surroundings. However, you still can't see cities or castles until you actually step into the space they occupy. The same goes for enemies, they are not visible until you step into a space with an encounter. However, all enemies have colorful graphics now, which you can see while within the combat. There are also proper graphics for when you visit an inn, temple, blacksmith or other characters. The graphics are obviously dated by today's standards, but compared to the first game, it is a great improvement. 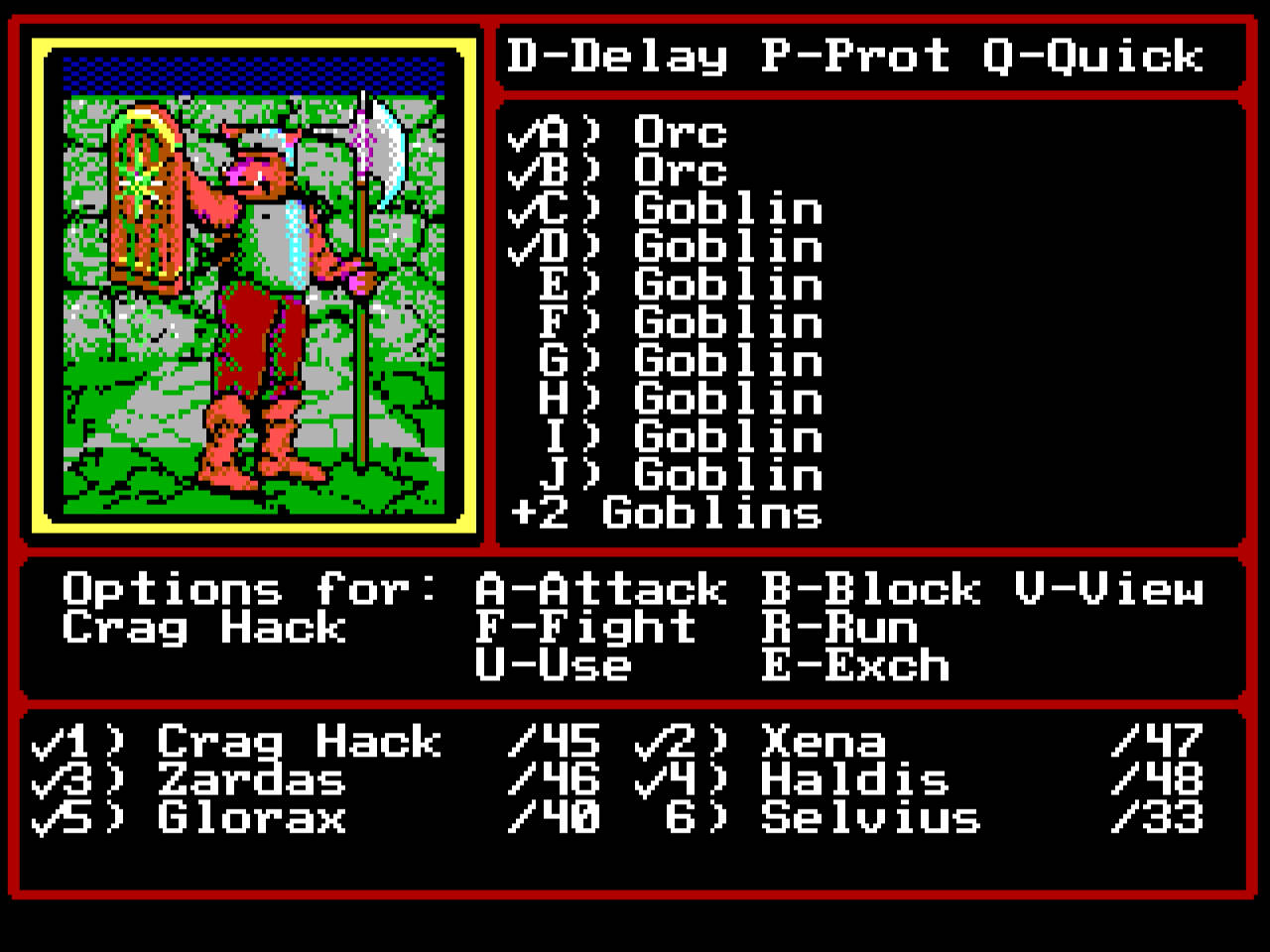 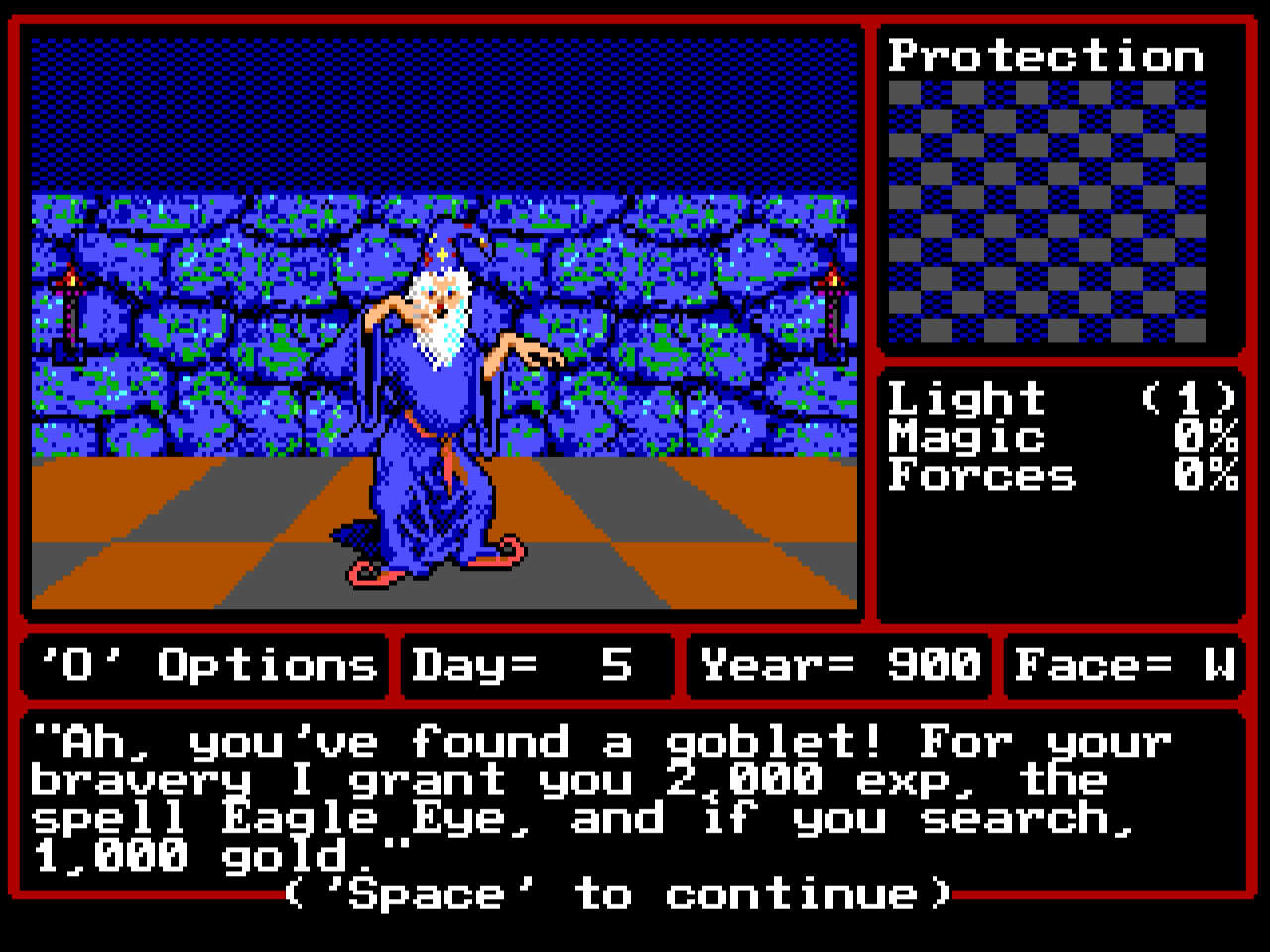 The world is still divided into areas consisting of 16 by 16 squares. Exploring the game world properly will generally require you to explore every square in every area. One big plus over the previous game is that your characters can learn a skill that enables automapping. There is also a spell that let you see a map of the surrounding area while exploring, making it a lot easier to get your bearings. Purchases made on GOG will also come with a guidebook that has maps of all areas. Personally I could not do without these maps.

A very interesting feature of the game world, is the four corners of the world map. Each of the four corners has a portal to an elemental plane, fire, air, water, and earth. It might just be the child in me, easily amazed by wonders and mysteries, but I am genuinely awed just by looking at the changing landscape. 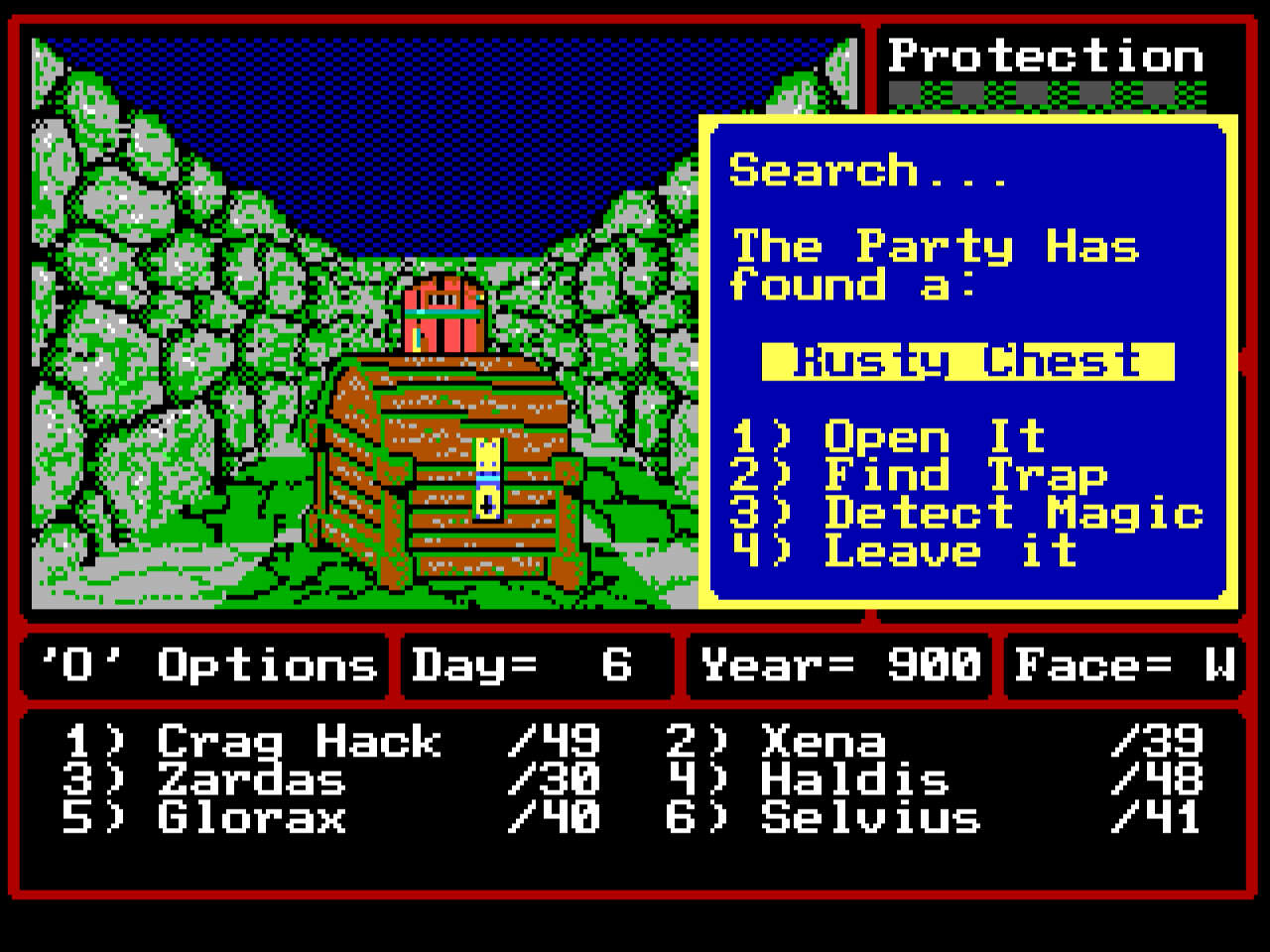 Combat works the same as in the first game. When you step into a square with an encounter, you get the choice to fight, or try to hide or flee. If the enemies surprise you, then you have no choice and must fight. While in combat, everything is turn based with each character having their turn to perform an action. Characters engaged in hand-to-hand combat can attack enemies who are also engaged in hand-to-hand. Those who are not engaged in melee, and have a ranged weapon, can shoot at the enemy. Spellcasters also have the option of casting a spell when it is their turn. The big difference from Might and Magic 1 is the number of enemies that can engage you in one battle. In this game, you can engage more than 200 enemies in a single fight. 200 goblins is a fight that moderately skilled parties can handle, but there is a chance that you may encounter hundreds of significantly harder enemies. Spells that can damage larger groups of enemies become extremely useful in large battles.

The game adds two new classes in addition to the Knight, Paladin, Archer, Cleric, Robber, and Sorcerer. You can now also select the Barbarian, which has the most hit points of all classes. They can't use any magic, but can use almost all weapons and armor. The high hit points means that they are ideal as front line fighters. There is also the Ninja, which has most of the same thieving skills as the Robber, but to a lesser degree. In exchange, the Ninja has a chance to assassinate enemies in combat, resulting in extra damage. This increases the number of available classes to eight. However, in this game you can employ hirelings, which must be paid daily. You may have two hirelings at a time, increasing your party size to eight. Personally I did not make much use of hirelings as I found the base party of six to be enough, but it is a nice option in case you feel like you could use an extra spellcaster or ranged combatant. 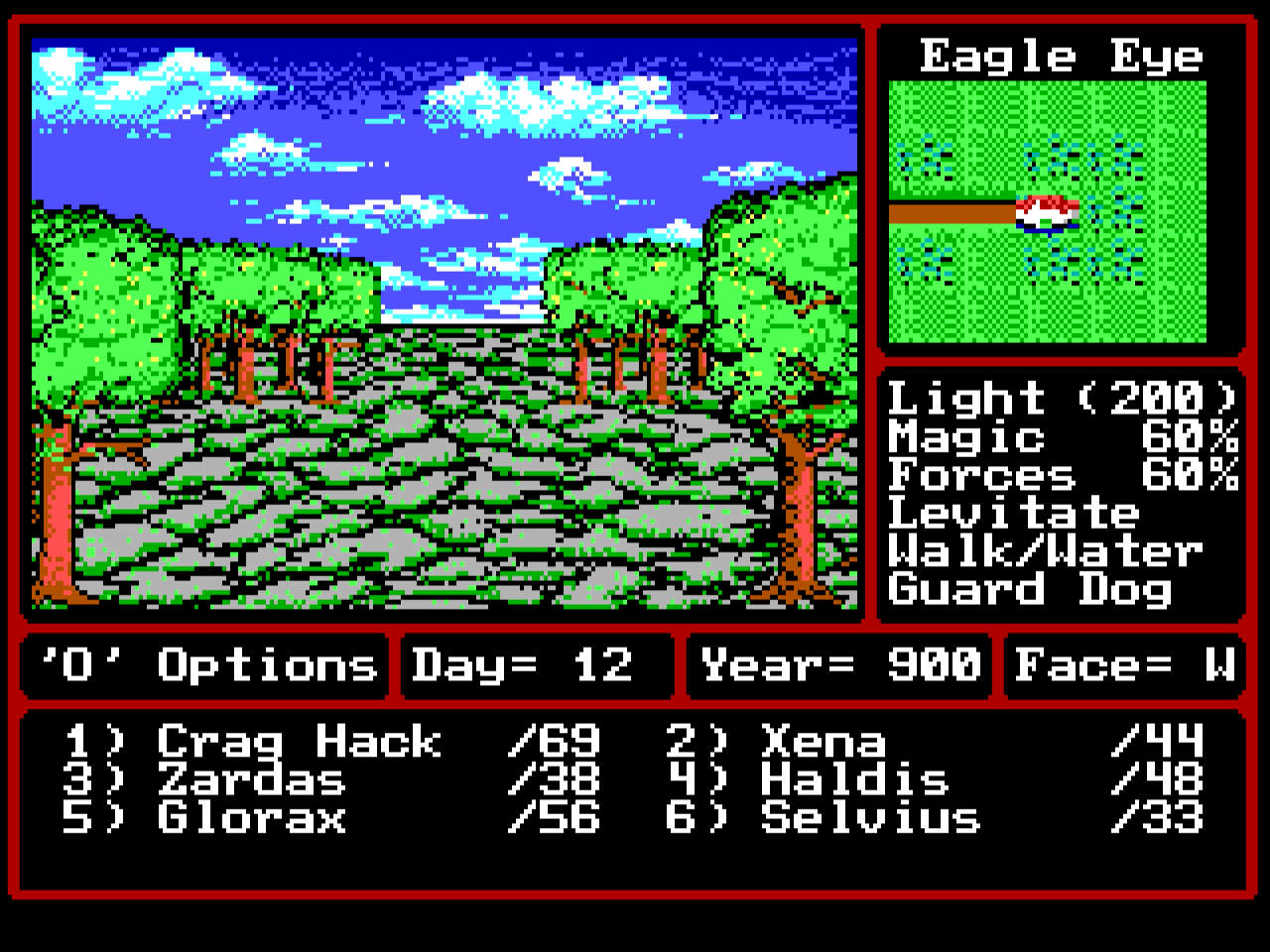 Your characters can now learn skills, which is completely new in this game. Previously, only the robber had the additional ability to disarm traps and unlock doors. This is still in this game, represented by the Thievery skill, which will improve for both the Robber and Ninja when they level up. There is now also the option to learn additional skills for all characters, each character may learn two such skills. The skills are: Arms Master, which increases accuracy with weapons. Cartographer, which enables automapping. Crusader, which is required to take certain quests. Hero/Heroine, improves all stats. Merchant, trade more favorably. Pickpocket, increases thievery. Then there are several skills that increases a specific stat: Athlete, Diplomat, Gambler, Gladiator, Linguist (also enables the character to read certain glyphs), Soldier. 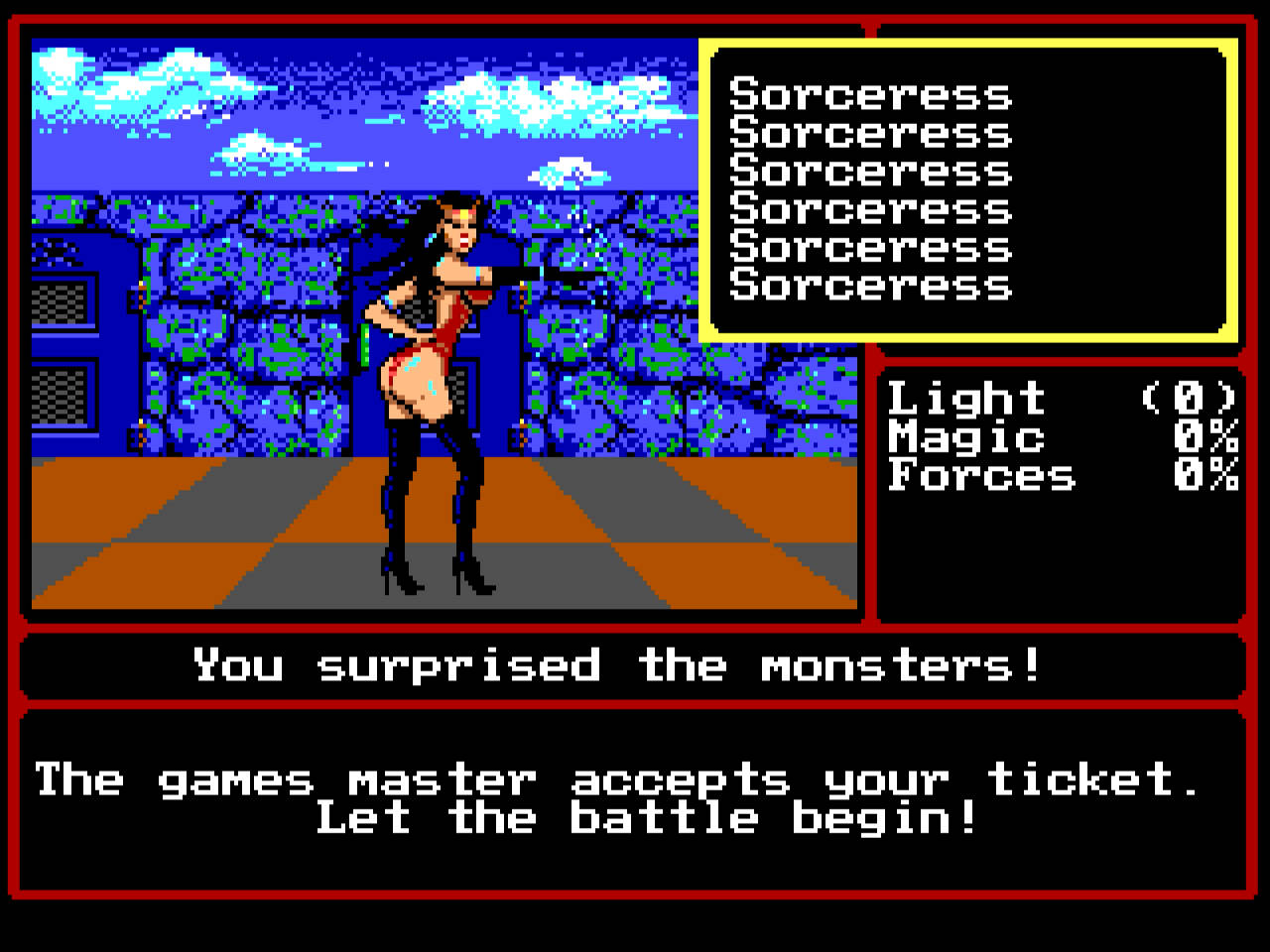 There are three additional secondary skills that I want to give a special mention, since they are very useful for exploration. When exploring large open areas, there is a chance that you will lose your way and end up in a random area instead of where you want to go. You need the Navigator skill to avoid this. Pathfinder will let your party move straight through any forest square, as long as at least two characters know the skill. Mountaineer will let you pass through any mountain square, but also requires at least two characters to know the skill. I would consider these skills to be essential to be able to explore the land of Cron properly.

This is also the first Might and Magic game to include class promotion quests. Each class can be promoted, which will result in a + appearing behind your character class. 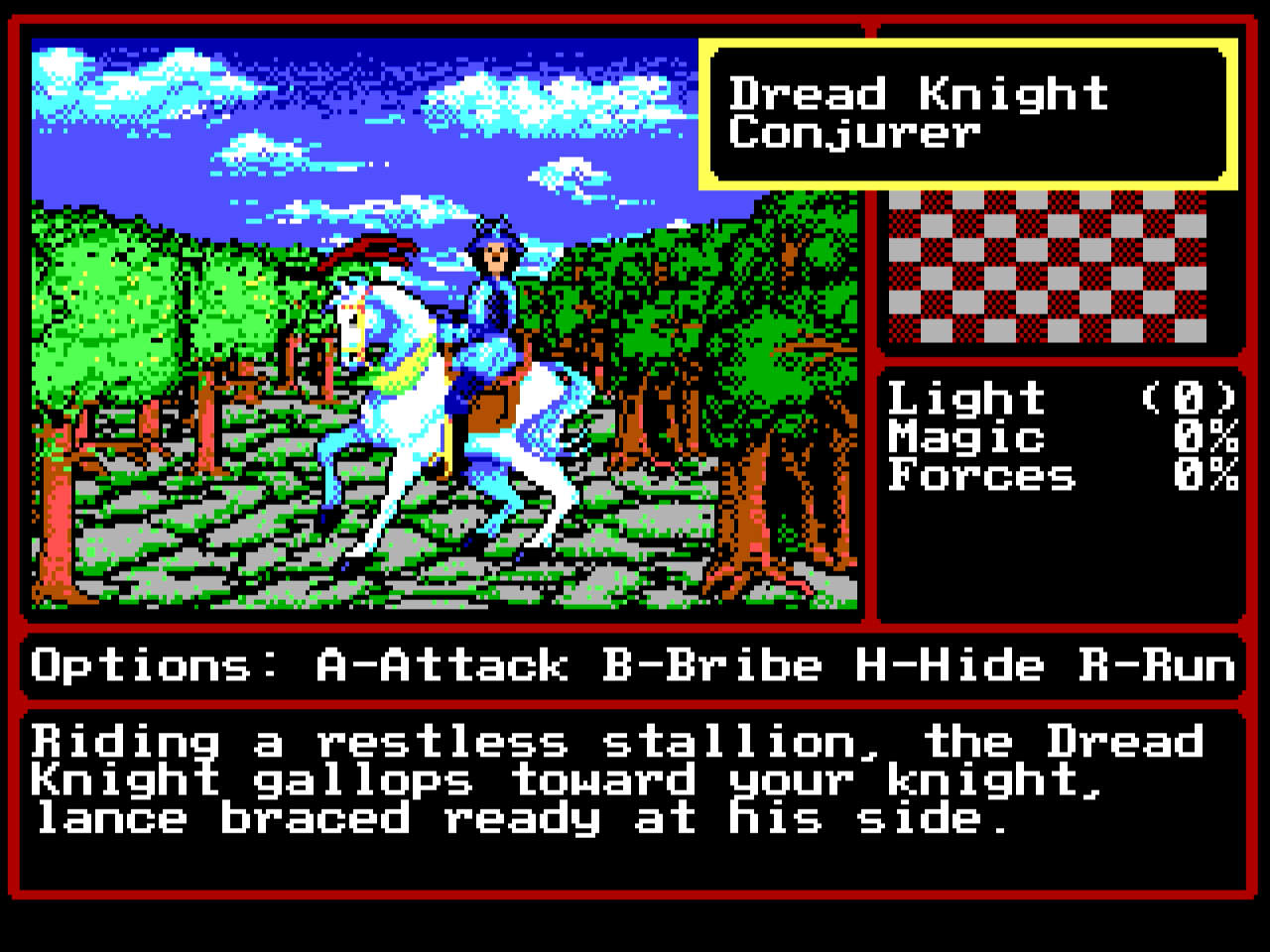 The Lord of Water attempted to strike back by creating the Mega Dragon. Kalohn, equipped with only the orb, was defeated by the dragon. However, his last spell created a flood that also drowned the dragon. This created a large marshland called the Quagmire of Doom.

Your party, having uncovered Sheltem on Varn and then followed him here through the Gate to Another World, are now arriving on Cron. The spirit of Corak will appear and warn you of the dangers ahead. Corak, a name that was mentioned a couple of times in Varn, is apparently aware of who Sheltem is, and was hunting him. As the party explores the land, Queen Lamanda, the daughter of the dead Kalohn, will ask you to change history and save her father. To do this, you will need to get four talons from each elemental plane, as well as finding the orb. With these items, you can use a time machine to travel back in time and help Kalohn defeat the Mega Dragon. Back in your own time, Kalohn will be the king of Cron, and tell you a password which you will need later.

Your party may now enter Sheltem's dungeon where he must be defeated. Cron's control room will then be found, where it is evident that Cron, as well as Varn, the land of the previous game, are in fact artificial habitats traveling through space. Cron and the accompanying Varns were made by the Ancients to populate the planet of Terra. Sheltem, the Guardian of Terra, see this as a threat and have set Cron and all Varns to collide into a star. You must then solve a cryptographic puzzle in order to control the guidance system and prevent the crash. Now your party will arrive at the planet Terra, where the next game takes place. 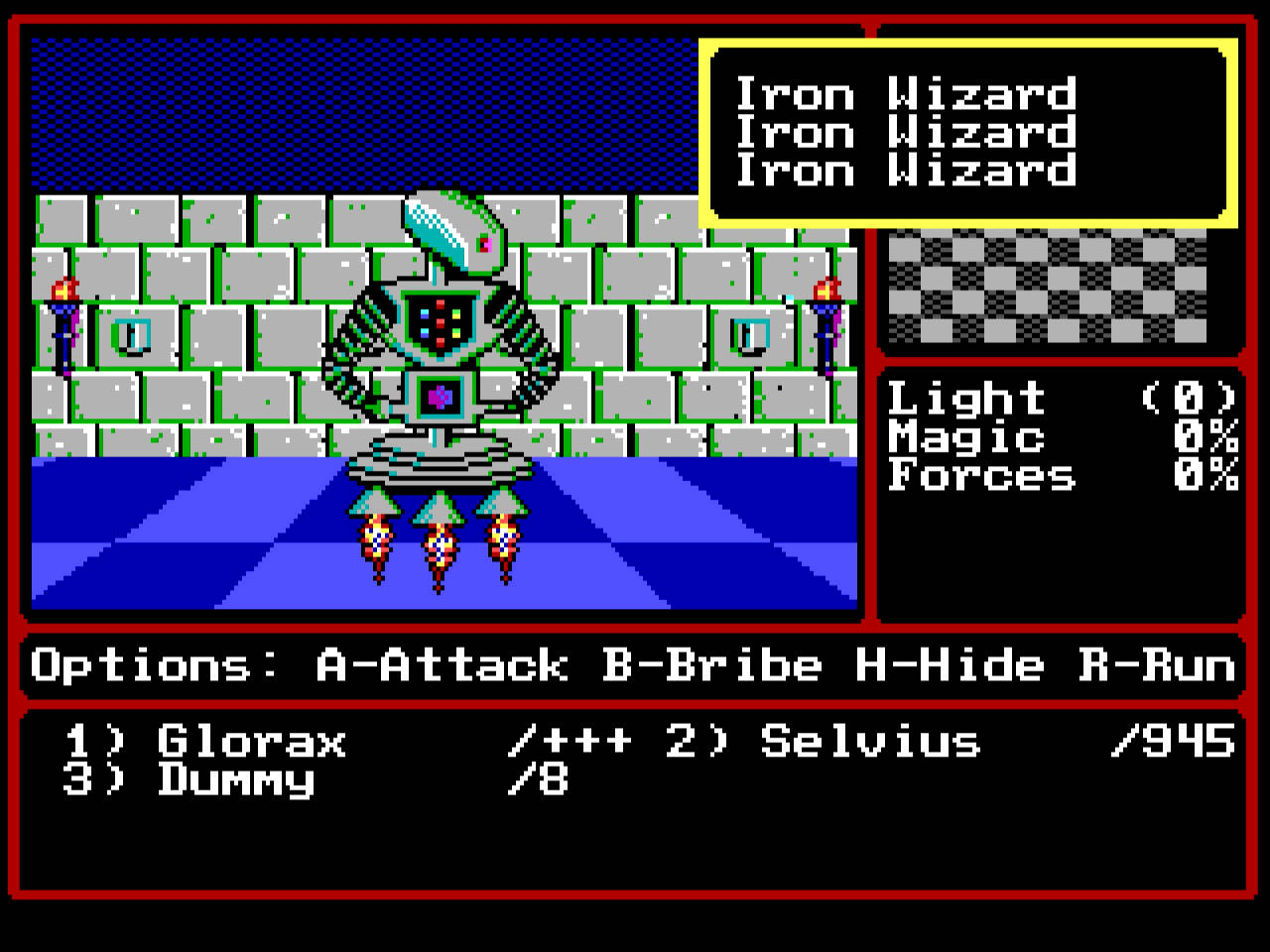 The improved graphics made it so much easier to get into this game. Even though the gameplay is pretty much identical with Might and Magic 1, it is so much easier to visualize your surroundings when the graphics are better. I would still consider this game to be for people with a special interest in either older games or the Might and Magic series. Most people that are used to modern games would probably give this up quickly.

To be completely honest, I actually preferred Might and Magic 1 over this game, at least for prolonged play. That might just be because of the novelty of the first game's poor graphics and crude interface. But there is also the issue with battles in this game that could become extremely tedious when fighting hundreds of enemies at the same time. That is probably the only really negative point about this game for me.

Like the first game, the primary point of this game is to explore the world. This is something these games really do well. Exploring is a lot of fun and definitely the game's strong point. Traveling through the world by the use of the Fly spell is very satisfying. Each town also have at least one portal to another town, so you can get around the world much easier. 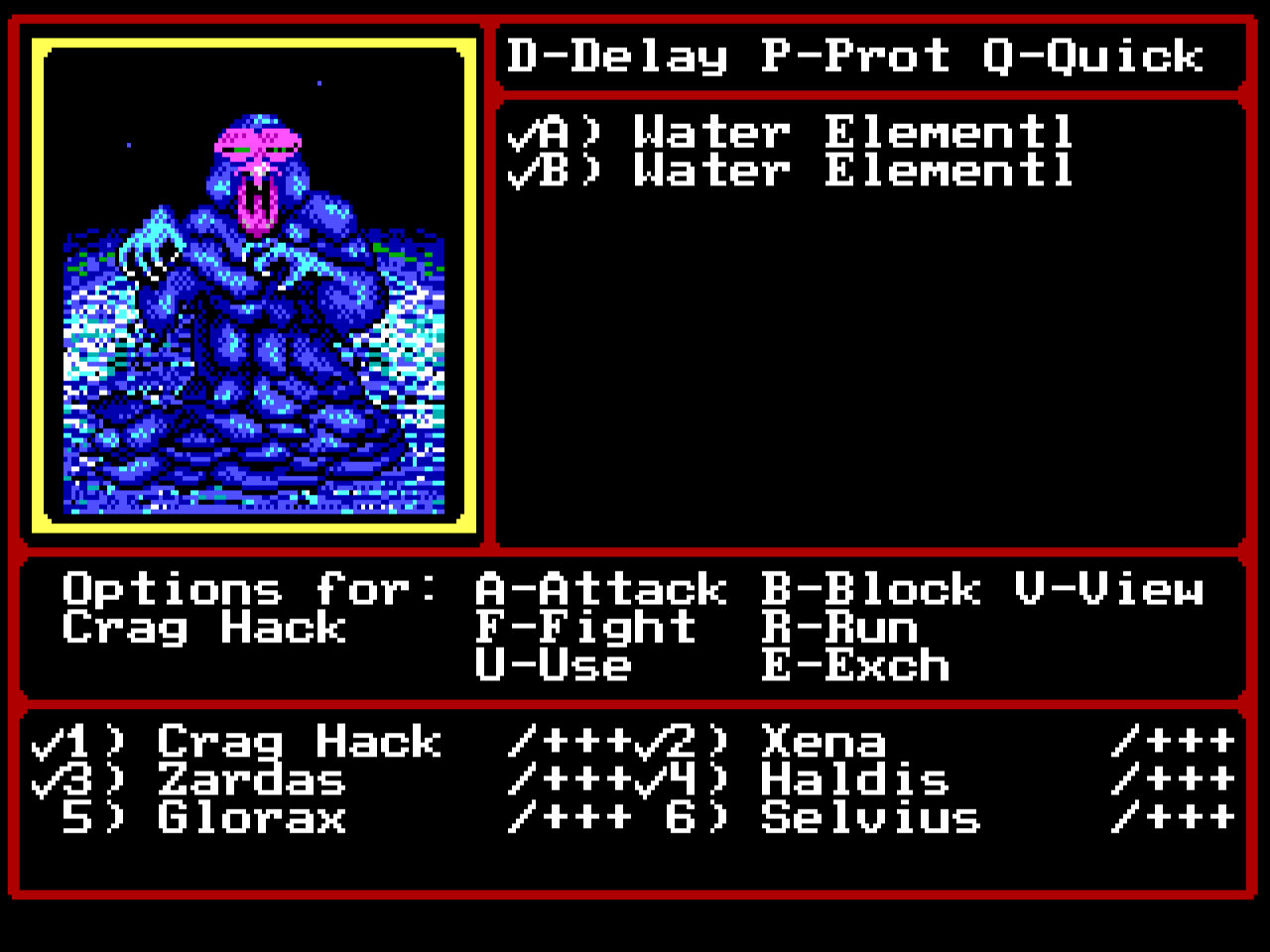 There is a very obvious science fiction, or rather science fantasy element to this game. These elements are a lot more prominent in this game with items such as blasters being quite common, and robotic enemies. I personally really enjoy the blend of fantasy and science fiction, and this series does it very well in my opinion. This game, to a larger degree than MM1, makes it clear that there exists an advanced civilization, the Ancients.

In the end, I feel like this is a more fleshed out version of the first game and definitely a strong entry in the Might and Magic series.